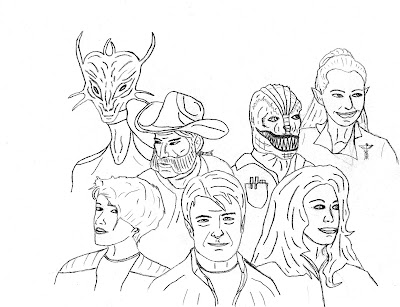 I originally started this blog as a place to record my adventures in Five Klicks From The Zone, but quickly realized that there were other solo games that I could play and record on here as well. As such, I have a list below of games that I've played which you can find write-ups for on this blog. The list will grow as the blog grows, so check back here periodically to see if there's something you might have missed.

I'm something of a game designer myself.

FIVE KLICKS FROM THE ZONE

Welcome to the world of Five Klicks - Skirmish campaign games for solo and cooperative players, using the tried and tested mechanics of Five Parsecs From Home and Five Leagues From the Borderlands. In Five Klicks From the Zone you will take a squad into the wasteland, fighting to protect your home from the raiders, mutants and worse that seek to destroy it.

Five Klicks Xeno-Mod: A basic fan-conversion of Five Klicks From The Zone modified for survival settings in the Alien universe. Write-Ups and Game Mod Info

Forty-Thousand Bughunts From The Zone: A moderate overhaul abomination of rules from 40K, Space Hulk, Five Parsecs: Bug Hunt and Five Klicks From The Zone. Write-Ups and Game Mod Info

Spellslinger Apocalypse: A re-skin of Five Klicks to give it the same experience with a fantasy aesthetic. Write-Ups and Game Mod Info

In Ironsworn: Starforged, you are a spaceborne hero sworn to undertake perilous quests. You will explore uncharted space, unravel the secrets of a mysterious galaxy, and build bonds with those you meet on your travels. Most importantly, you will swear iron vows and see them fulfilled—no matter the cost.

Take command of one of the early flying machines to shoot down your enemy, complete recon missions, and become an ace, following in the steps of men like Manfred von Richthofen, Eddie Rickenbacker, Georges Guynemer and Francesco Baracca!

The WW1 series of Wings of Glory is an easy, fun to play, fast and furious system which you will be able to start playing minutes after opening the box! Innovative game mechanics encompass planes with very different flight capabilities and firepower, while still keeping the flow of the combat simple and fun.

Dungeon Hero is a simple, fast, solitaire RPG game in a print-and-play "zine" format. Create a hero using eight defining characteristics, like Archer of the Realm or Chainmail or Stealthy.  Assign them dice ranging from d12 to d6. Note your Health and Stamina levels, and then select an adventure 'zine.

Each adventure 'zine packs a lot of adventure for such a little size! Using a clever new exploration mechanic, each foray into the dungeon will offer different challenges using a simple combination of two dungeon elements.  Select two of your own traits and roll off against the two dungeon elements, and see if you can beat the dangerous situation.  If you roll well, you survive to continue deeper.  If you fail, you will take damage. But don't despair – you can spend Stamina to re-roll dice before you apply their effects!

If you can make it through the dungeon, you win! Your score is how many treasures you manage to bring out of the dungeon – see if you can beat your high score by playing again!

In this game, your Adventurer will take on Quests, go on Journeys, encounter NPCs, fight Monsters, take Stat tests, learn Spells, chuck Potions, set off Traps, Earn gold, and Level up. You need only this card and a handful of dice to play (and I use the term "handful" loosely because the more dice you have, the easier you can play this game)

You're a witch living in a hut among trees and marshes. Recently your mentor has passed away and you need to perform parting ritual, all the while helping people with their troubles and honing your brewing potions skill. For this game you'll need paper, pen, deck of playing cards without jokers, six-sided die and double-six domino set.

King Briarbun, the evil tyrant, is dead and has been for a century. Unfortunately, the festering stench of his reign remains behind, plaguing the land with its touch. Whispers also speak of him still being alive someone and hiding out in some dungeon near town. Can you, brave warrior, rid our fair land of this corruption?

ONE PAGE DUNGEON is a roll n' write roleplaying game for one player where you record your adventure directly in the book! This deluxe campaign collects all the Season One issues of the game, including: Lair of the Skull, Into the Fae Veil, Black Bile Keep, The Wicked Wizard, and The Wolf Den!

Welcome to Five Parsecs Bug Hunt. Roll up your characters and delve into a solo campaign game fighting horrid aliens, completing objectives and hoping to hang on while the evac shuttle arrives. Your characters will progress from mission to mission (if they survive) gaining experience and reputation, while engaging in procedurally generated missions against a wide array of alien enemies. In each mission, you will attempt to complete random objectives, while taking advantage of tactical locations which may give you benefits such as blocking off approaches or distracting enemies. Enemies approach using a "blip" system to keep you guessing. Combat mechanics are simple, easy to learn and can be picked up in a turn or two.

Bug Hunt is built for solo and campaign play from the ground up, instead of these factors being tacked on as an afterthought.

ALONE AMONG THE STARS

A tabletop roleplaying game about exploring space and experiencing wondrous sights. Uses a standard 52 card deck and a six-sided die. For 1+ players.

ALONE AMONG THE DERELICTS

A tabletop roleplaying game about exploring derelict starships. Uses a standard 52 card deck and a six-sided die. For 1+ players.

You and your companion(s) awaken in a realm unlike your own. Divine machines glitter from every side of the room, and ask about yourself and those around you. To make it back home, answer them honestly and reveal your truth to not just the automatons… but to the partner(s) you are sitting with. The only way to win is to be vulnerable. For 1-5 players.

PRINCESS WITH A CURSED SWORD

A journaling role-playing game for one player. It requires a tarot deck and can be played in half an hour or more. It fits on one printed page.

Weasel-Tech is a solo campaign game of giant anime robot action. All you need is some miniatures and you can start your own game play. Full campaign game including random events, operational progress and character progression. Fast playing combat rules inspired by anime mecha shows and comics. No plodding robots here. Undertake randomly generated missions with random events and side objectives. Includes a full Social System, allowing you to follow your pilots and crew as they make friends, get in fights or even fall in love.

BattleTech is a science-fiction “space opera”: a factional, militarized universe set in the thirty-first century, a future where humanity has spread to the stars and spawned titanic interstellar empires, each nation controlling hundreds of worlds across a region of space stretching a thousand light years and beyond. Initially published over thirty years ago as a tabletop board game, BattleTech has gone on to become one of the gaming industry’s most important and longest-lasting science-fiction universes..