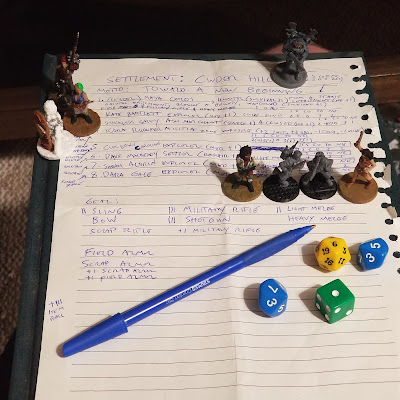 Getting together a team for Five Klicks From The Zone turned out to be a lot easier than I thought it was going to be. I decided early on that I would let the die rolls set the tone for the group, their reasons for risking it all in the wasteland, and even the nature of the post-apocalypse itself. As the characters began to come together, I swapped out a few models here and there, and eventually decided on the eight you see here. Of course, four of them were unpainted, so putting colors on them was the first thing I aimed to do.

That, and finish some technical-looking terrain I could use in gameplay!

I rolled a lot of explorers, four in total, and got lucky on my rolls for weapons, armor and events. When it came time to detail my settlement, I first thought I would name it Cinder Hill, and model it after the town of the same name from several novels I've written set in a post-apocalyptic wasteland. When it came time to figure out how I would present the settlement visually in order to make it feel more real, I ended up going in a completely different direction instead. I ended up going in a very Mad Max direction. 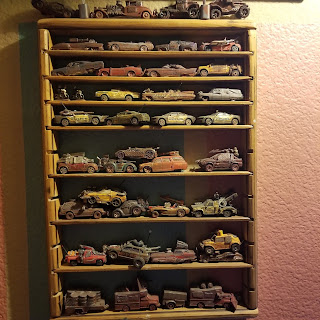 I have close to eighty Gaslands cars that I've customized myself (some of which are pictured above) and while I was thinking on how I was going to represent my settlement, it hit me that a settlement is just a home, and there's no reason why a home couldn't be a nomadic caravan making its way across the wastes in search of something better. What better way, then, to represent not only the settlement itself, but also its growth factors, than with a bevy of post-apocalyptic vehicles?

I'll be documenting the victories, struggles and growth of my convoy of post-apocalyptic survivors as I play through a campaign of Five Klicks, so feel free to follow along if you find the storytelling interesting. At the very least, it's already inspired me to create new miniatures and get some painting done on my tremendous pile of shame, so that alone is awesome. It's definitely a great system-- in fact, in many ways, it's exactly the system I've always been looking for without truly knowing it. Sure, it's a little rough and could use some polishing, but I'm excited to let the story tell itself through random events and the ways in which my squad interacts with them. I want the nature of the world, and of the apocalypse, to reveal itself to me through the experience of playing, so stick around to find out the secrets of this post-apocalyptic world as I discover them.