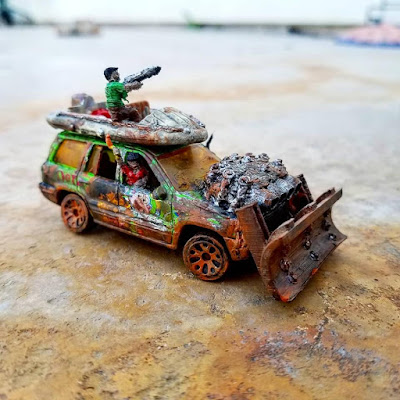 Why Am I Playing Five Klicks?

I still have personal issues with the idea of solo play games. I recognize that these are personal issues, and so I am challenging myself to work on those issues and overcome them through play. I actually loved building and playing my own solo play games as a kid, but somewhere along the way, I lost the magic and decided that anything that didn't involve me striving toward the creation of a marketable product was a waste of time. Why play a solo game that builds a story when I can just put my nose to the grindstone and write another book instead? That's the mentality in myself that I aim to change. Fun is important, and I'm doing this mostly because I want to embrace the idea of having fun freely, without any strings attached.

There are other reasons also why I am playing Five Klicks. I'm playing it because the process of creating and painting miniatures for use with the game is inspiring and exciting to me, and I've been painting like a madman since I discovered this game (and Five Parsecs.) I've organized the miniatures I've been collecting for the past 20+ years and I've made a huge dent in my unpainted collection.

And, I'm also playing because my wife is super excited about Five Parsecs, and I want to be ready, with firm knowledge of the system basics before we dive in for co-op play and run our own starship together.

What Are My Goals?

1. To have fun and keep a record of the experience so I can revisit it later, so others can enjoy it, and to help increase the visibility of Five Klicks and Nordic Weasel Games so that the material continues to grow and expand in fun ways as more people learn about the game and play it.

2. Grow Valkyrie Convoy to at least 5 in every Settlement Factor

3. Visit all of the locations published by Nordic Weasel (and maybe learn the system well enough to create new locations myself)

4. Create new miniatures through kitbashing and CAD, paint them, field them and get sweet pictures of them.