Lair Of The Skull (One Page Dungeon / MicroRPG) 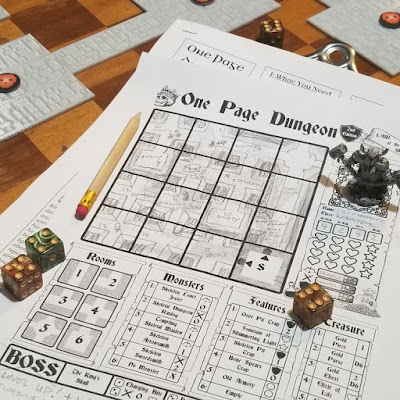 I picked up the One Page Dungeon book for Lair of the Skull a while ago, but remembered it the other day when I was thinking about expanding out into other solo games.

Playing the game, I played as Sigyn Hammeress, a Warrior with a hammer, leather armor and a sling. I don't know whether I just got really lucky, or if the game is way too easy, but I plowed through this dungeon in about an hour and a half, without losing a single point of health. Actually made me laugh a little when I got to the end of the book and it had tips for making the game easier.

That being said, I could see with lower statistics (like a lower defense score) the game could be a bit harder. The only time I almost got hurt was when I battled the boss and he pulled his death ray on me, but even then, my rolls were stellar and I got through it.

It was fun, though, and I love the cleverness of the system, the simplicity, the smoothness and the presentation. Maybe next time, I'll try a wizard. I think that would be a lot more difficult to own the skeletons with. I definitely recommend the game for a fun, simple, solo adventure. Can't go wrong-- it's free! I'm definitely considering picking up the full "Briarbun Campaign" book so I can play a full campaign in this system.

To summarize the adventure, Sigyn Hammeress, Warrior Maiden of the North, noticed that the castle of the fallen despotic King Briarbun was full of odd lights and undead activity. Readying her trusty hammer, she strode through the gates like she owned the place, and promptly, well, owned the place. Striding from room to room, she smashed skeletal swordsmiths, skeletal archers, tempting skeletal maidens, and strange, skeletal rat-dogs. The place was full of healing elixirs and fountains, none of which Sigyn needed as she calmly smashed all the skeletal warriors to dust. When she finally found the source of the evil, she wasn't surprised to find that it was the skull of the king himself. The skull moaned and howled, but Sigyn was unphased. She pulverized what was left of the undead king just as easily as she had pulverized his minions.

Unfortunately, there wasn't much treasure left to be had in the Lair of the Skull. In total, she only found 26 gold, but it was better than nothing. Not bad for a solid night's work hunting undead.