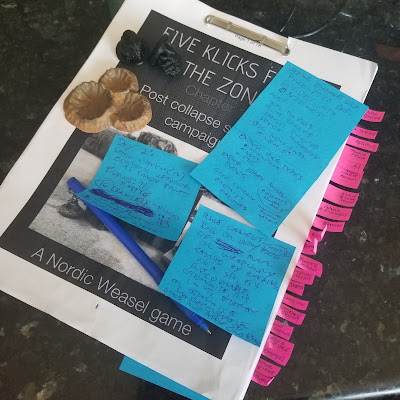 I feel like I learned a lot from my first game of Five Klicks, and it definitely helped kick me into gear and focus me in my creativity. I also feel like I'm getting my first tentative grip on the setting and the system, and I'm already playing with ideas about how it might be improved in future games.
To start, in preparing for Day 2, I made all the requisite rolls and ended up with Economic Upswing as my Settlement Event, giving me +1 trade point to work with after the skirmish. The event I rolled for the campaign turn was another battle, this time against "Crawlers." In reading this entry and in comparing it to some of the others, I figured that Crawlers would be things like mutated rats and/or snakes. For this encounter, I went with the former, and printed up 8 Diseased Giant Rats from Thingiverse which I dry-brushed and speckled in radioactive green, detailed in yellow and washed with red. All in all, they're a pretty gnarly bunch.
The battlefield rolled as having unstable footing, and we did not seize the initiative. 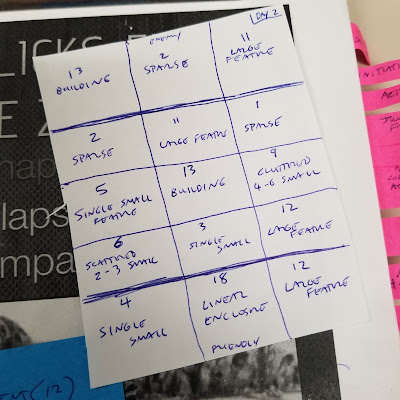 Terrain roll results for the table.
In preparation for the next game, I modified my copy of the rulebook by adding page numbers at the bottom of the pages, and also flagged the relevant reference tables from the ruleset for ease of use. In doing so, I, of course, re-skimmed the rules a bit in the process, and realized that I had actually added two additional enemies by accident last time, creating a bigger threat and lengthening the game by accident.
I also started tinkering with other ideas that seemed to fit the gameplay.
One rule I decided to introduce was a new loot rule. I get the mechanical reason behind not allowing characters to loot the bodies of the fallen, but at the same time, I felt the across-the-board no looting really closed off a wonderful opportunity for picking up specific special loot from certain encounters.
As such, I modified my ruleset to allow a 1d6 roll for every weapon or armor on a fallen enemy. If the result is a six, the item is recoverable. If it is anything else, the item was broken, lost or otherwise rendered unusable in the fray. My thinking is that this allows for a more organic progression, and also allows for special weapons and armor to be obtained in rare circumstances. This rule, of course, does not apply to things like teeth, claws, stingers and other parts integrated into the bodies of enemies.
After picking up copies of the Hazy Caves, Factory 17 and The Skull Taker Hideout, I can now see that there was a similar idea in the game creator's head, as he implemented a loot system allowing you to take the gear of one fallen enemy instead of leaving all bodies unlooted.
Another thing that I thought Five Klicks could use was an expanded enemy encounter table. In looking over the existing table, I realized that it was mostly just various forms of humans, and didn't have a lot of variety. Great for a game set in a world like Fury Road where the only monsters are those of us who have survived by becoming monsters, but I've always liked a little wackiness in my wasteland.
Thus was born the table I am working on which tacks right over top of the existing enemy encounter table, requiring you to roll a 1d30 instead of a 1d20 if you want to apply the new results. The idea is that, if you want the basic, raw, no-frills wasteland experience, just stick to the 1d20 table, but if you want some weirdness, tack on the expanded table by rolling a 1d30.
This is still a work in progress, of course, but it already adds some of the things that I think the wasteland of Five Klicks is missing. Namely, it adds different types of robots and the high-tech descendants of those who were rich enough to retreat to a safe haven before the world ended. I have some ideas for vaults or bases in strange locations (including the moon) that I'm exploring mechanically as potential locations that can be found and encountered by our ragtag bands of survivors, so stick around for future updates about those ideas as well. Heck, the ability to migrate characters from Bug Hunt to Five Parsecs has me thinking maybe an adventure at an old missile base would be a great way to migrate characters from Five Klicks to Five Parsecs, but there's still a bit of thinking I've got to do on how to implement that. First, I must play and learn Five Klicks and see what thoughts come while I'm doing so.
Also, I'd just like to re-iterate that I am just doing all this for fun, but on the off chance that someone from Nordic Weasel games reads all this and likes my ideas, I'm totally open to working together in expanding the game. I have a lot of ideas, so feel free to reach out and connect. 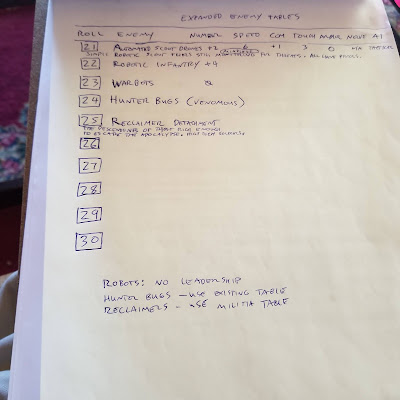