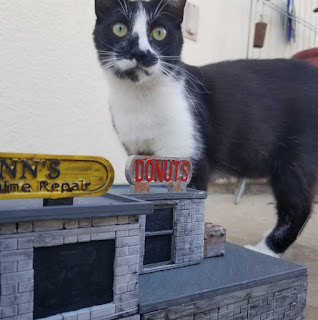 For me, finding the time to play (and blog about the play) has been difficult lately. Work is insanely busy, which means there's less energy at the end of the day for fun pursuits, but it helps that nothing about this process has felt like drudgery. I'm really loving this game, and I get antsy with the buildup that comes with preparing for each new campaign turn. I wish I had the time to play more than one new campaign turn per week, but with each turn taking about 4 hours, each blog post taking about 1-2 hours and additional prep taking additional time on top of that, well, it's hard to find the time. Ah, if only I'd had a system like this (and the miniatures) when I was in high school-- but isn't that the eternal lament of the aging gamer? (Insert laughter and big grin here.)

Streamlining the system so that it moves faster would provide more time to get into the combat, sure, but honestly, I think making everything faster would actually detract from the overall experience. The game seems to take exactly as much time as it should take, so I have no complaints.
In preparing for Day 3, I made all the requisite rolls and ended up with a Resource Shortage, meaning fewer activity points to work with after the skirmish. The event I rolled for the campaign turn was another battle, this time against "Scrags." This roll was a bit of a relief for me, as I'm shorthanded on my squad numbers this turn, and this enemy seems like a relatively minor threat. Here's hoping!
For battlefield conditions, I got "Bad Lighting" meaning visibility is reduced, but it shouldn't have much effect on my group. It'll actually do more to reduce the range of the Scrags, I think, as they won't be constantly firing at everything regardless of whether it's in range or not. Even better, I rolled a ten when attempting to seize the initiative, so we get a free action before the game starts.
With this in mind, I went to my miniatures collection and started looking for figures to represent the Scrags. Four of them have muskets, two have scrap rifles and two have pistols and melee weapons. Pistols and melee weapons are easy for me-- I have a bevy of figures I've created for Punkin' Figs which are equipped like that, but muskets are not something I've ever associated with post-apocalyptic fiction, so I figured it was time to make some new models to fit the bill. 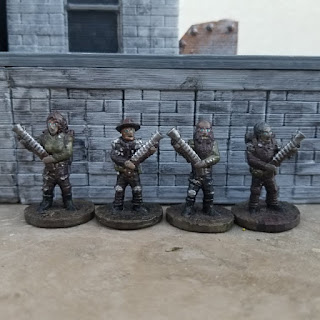 These guys were a pretty quick and simple mock-up, so I uploaded them to Thingiverse for others to enjoy as well.
After that, I decided that I needed a few other things to make my tabletop experience richer, so I proceeded to design, print and paint a series of "Suspicious Activity Markers" that more accurately reflect the nature of the world I'm building through this campaign. I figured most of the interesting things, (good or bad) that my squad might encounter would either be remnants of technology on the skeletal remains of a lost soul, or might alternatively be living in (or picking at) those remains. Building three base designs, I then painted them up in different ways that I felt would help to differentiate them from each other. These are also now up on Thingiverse. 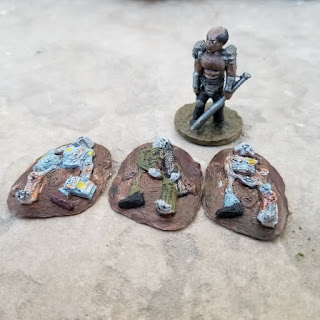 I also painted by generic "Petty Raider" and thought, man, this guy has so much character, maybe he'll be a future recruit for the group. Time will tell-- I have a lot of models I'd like to see join the squad down the line.
Oh! And the buildings! I needed more buildings for future games, and since I had some designs kicking around, I moved them to the front of the printing queue, got them painted and listed on Punkin' Figs.
Next step: Getting into the action of Day 3! 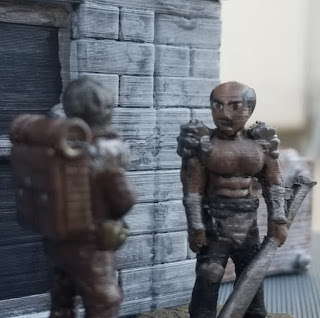