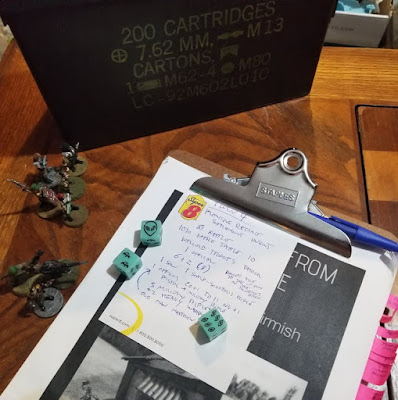 In preparing for Day 4, I'm starting to feel like everything really does happen for a reason. You see, here I am referring to "Old Man Matthews" in prior write-ups, enough so that he starts to become a recurring character. Then, I'm painting miniatures by shades (hitting as many with a single color as I can to save paint) and I end up finishing a wealthy-looking cyborg guy that I immediately decide is Old Man Matthews. Then, when I gather my week's worth of painting together, I decide to take a picture of Old Man Matthews and list him as a notable personage. After this, I decide that maybe since I have a miniature, he can be like a boss that my squad can face down the line. I tell myself that when I eventually roll for "Warlord Troops" on the enemy encounter table, I'll use Old Man Matthews as an officer. Seemingly against all odds, I then proceed to roll Warlord Troops for the enemy encounter, and realize I'm not even getting a break to prepare. Valkyrie Convoy is four days out of Cinder Hill and they're already going to be facing Old Man Matthews as their first boss. 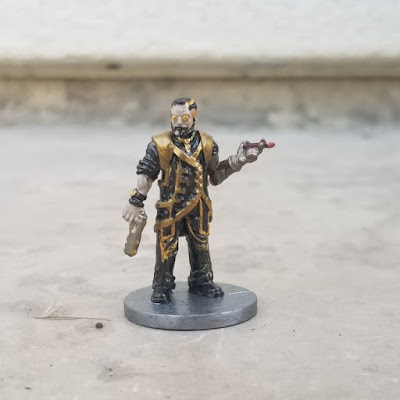 I'm nervous about this one. For the number of troops, I rolled a 1 and a 6, so the total number of people my squad will be facing is 8. They've got a sniper, they've got a SAW, they've got military rifles, and they've got Old Man Matthews. It's going to be a cause for celebration if we survive instead of TPK again. 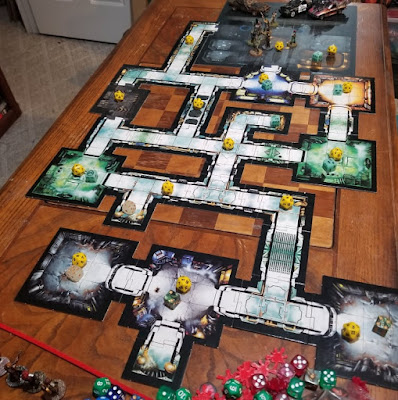 I've been on vacation for my third wedding anniversary this past week, so I've been throwing around a lot of ideas in my head about how to take this next encounter. I've been wanting to break out the Space Hulk tiles again for a while now, so this seemed like the perfect opportunity to do so. Definitely easier than starting a whole Bug Hunt campaign from scratch would be, though that's also on the agenda for some point down the road. I'm not sure if I'm the only person yet to do Five Klicks with Space Hulk tiles, but if so, here goes! Stay tuned for the next update! Basically, I used dice to partially generate a random layout, then rolled for suspicious events in every room (some using the neat UFO dice I got at the Alien Cathouse in Amargosa, Nevada, lol!) I see this encounter kind of as an "escape the bunker" scenario, with Old Man Matthews and his band of bungholes guarding the only way out.

Oh, and the ammo box is my dice collection. I've been carrying that thing around to game nights since I was sixteen, hehe.