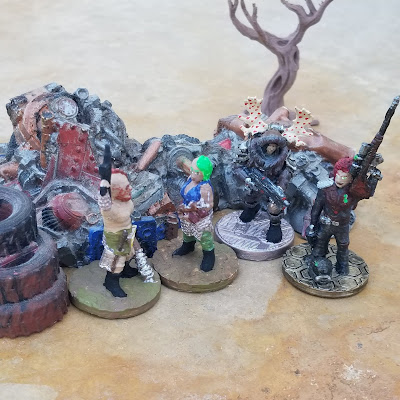 From the Journal of Maya Ceros, Day 5.

Maybe this world isn't all bad. Maybe there's hope for us, for Valkyrie Convoy, or hell, maybe even for humanity.

Getting out from under Old Man Matthews' wrath did something for us. I think everyone feels more free, and more hopeful about the future. For the first day since we left Cinder Hill, we got to rest, really rest, without worrying about finding bandits around the next corner. Worst thing that happened was something going wrong in Polybius's metal guts*, but it cleared up easily enough. Daedalus knew just which wires to reconnect to set him right again, and so we rolled on without a care in the world.

We used the quiet day to finally fix Dora's old scrap rifle and to give Sally a little extra firearms practice to make sure she doesn't get rusty in recovery.

I think it was around mid-day when we met The Outlaw.** He waved us down near a pile of junk and a pair of dead trees, asked us what we were doing so far from any settlements. Sally and I decided there was no harm in being honest with him. Have to admit, even when she's being honest, Sally can talk her way into the heart of anyone if she tries hard enough. He started out wary, eyes shifting as he talked to us, but Sally's way with words put him at ease enough that by the time he'd had enough jawing, we'd gotten him to a good, cordial place. As luck would have it, he pointed us to a small camp nearby where junk traders had set up shop. I think it was near dusk when we made it there and started to trade, but the results we left with were pretty good. With quick dealing, Sally managed to score us some kind of cybernetic booster implant that looks terrifying to me, but probably would give one of us a hell of a kick in combat, if we could afford to put anyone in a bed long enough to recover from the surgery that something like that would require.

Maybe it was fortunate that we weren't the only ones trading at the camp that day. While Sally did the wheeling and dealing, I got to talking with the stranger, got to trading names and talking about past mistakes and ideas. Turns out the stranger's name is Peregrine, and she drives a well-stocked truck she calls "Ol' Tweatus." Didn't take any convincing at all to get her to join us, and at the end of the day, Valkyrie Convoy is stronger for it. We can always use more hopeful souls, people who believe in something better out there beyond the wastes.

At least, I hope we're stronger for having her. She's well equipped, sure, has military training and doesn't talk much about her past. Come to think of it, I wouldn't be surprised if she's running from something.***

Hell, aren't we all?

*The Settlement Event I rolled was "Accident," where a random squadmember becomes worn. Rolling for the squad, I got Polybius as the one, but since we didn't go into battle this turn, he heals up before the next turn.

**I rolled absurdly low on my Outlands Encounter (03) and got Wanderer - Outlaw. He started as "Suspicious" but Sally talked to the Outlaw and got a solid nat 6, so the outlaw became Cordial. Sally keeps talking to the Outlaw and gets a 3+1(4), so we left on good terms, but didn't win him over enough to pick him up.

*** Peregrine is the result of a high roll on the recruitment table combined with the heavy machinegun that was one of the items acquired in trading. She's definitely a beast, skills wise, and so I think I'll be fielding her immediately. Plus, it was fun to have an excuse to use my old kitbash assassin from my 40k days when I was 15. 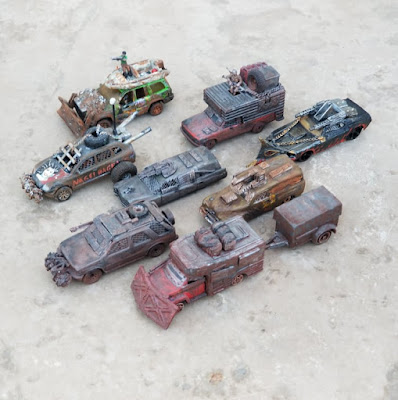