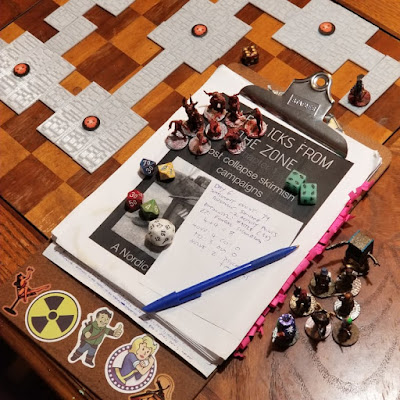 I've come to realize that the chance of rolling something other than a battle seems to be unlikely in Five Klicks. Sure, it's a strong 30%, and I don't think it should be higher, I just wish my die rolls were more inclined to follow statistics, lol.
That being said, I think that this next battle is going to be very interesting and very fun.
After Day 1, I started working on a custom encounter table that basically uses a 1d30 when rolling for enemies instead of a 1d20, adding ten new entries to make the world of Five Klicks bigger and more interesting. For the first time since that point, I got a result higher than 20, and so in Day 6, I face my first custom threat: Encounter #27: Fungal Shamblers.
Hilariously enough, these guys are based off the Shatter-Forms of Bug Hunt that completely wiped the floor with me on my first play of that game. They're only a +4 in number on my custom sheet, and already, I'm thinking that the 8 I rolled aren't going to be much of a threat.
So I upped the ante. 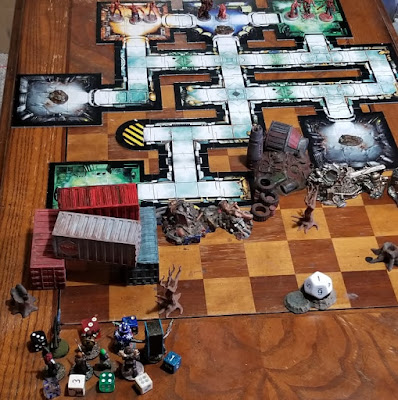 Shatter-Forms are brutal up close, so what better place to encounter them than in the labyrinthine tunnels of an old scavenger hide-out. For gameplay purposes, I made them Psycho, Mindless, Penetration 1, Damage 1, Toughness 3 and speed 4. When killed, these Fungal Shamblers explode and do a damage zero hit to any squadmembers within 2 inches (meaning no chain reaction kills) so we might get slaughtered. I'm willing to embrace that possibility. 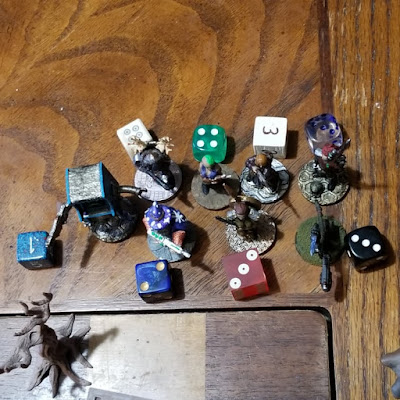 I also set aside custom initiative dice for each of my Squad members so I can roll them all at once and know which one corresponds to which character. Good old Polybius gets the numeral die, Merlin gets the cosmic die, Maya gets the elk-bone die, Sally gets the neon green die, Nike gets the pirate die, Kate gets the invisible die, Peregrine gets the black die, and Kassandra gets the retro Sands Casino die.
Other notes: I rolled two suspicious locations, one that ended up being closer to the Fungal Shamblers and one that ended up being closer to Squad. If the Shamblers reach one (or both) before the squad, things could get even more interesting.
Labels: Five Klicks