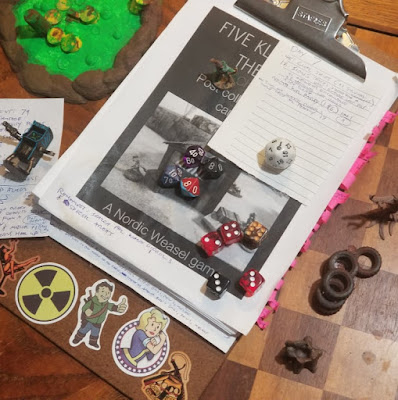 This time, I completely threw out the terrain generation rules for Five Klicks. Actually, I've kind of been doing that for the past few games, half-heartedly taking cues from the die rolls for the placement of classic Space Hulk tiles, but otherwise ignoring the rules. It's not that I don't like the rules, it's just that they only make great wasteland terrain, and I want a little more variety in my table sometimes. I'll definitely be using them again in the future, but for now, I broke out the serious terrain and built a genuine compound. 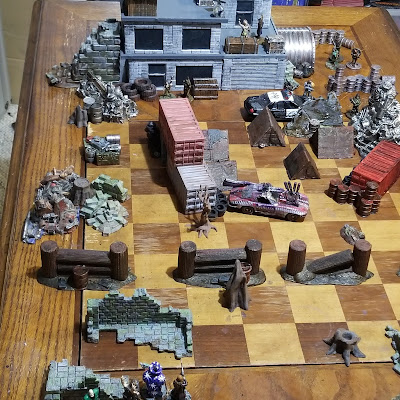 The big buildings and the log barricades are, of course, from Punkin' Figs,  but there are also quite a few Thingiverse ruins and plaster junkpiles mixed in there that I've been carrying around for a while. I used a sort of blanket system for placing Suspicious Activity markers, rolling D6 for the left side and D6 for the right side 5 times each to see were (vaguely,) within an 8 inch square, I should place a marker. Worked out really good-- for the enemies. We'll see if they trounce my squad or not next game.
I'm also working on ideas and ways that I can mesh some of the mechanics for Five Parsecs: Bug Hunt with Five Klicks From The Zone to make for quick urban raids into dense, crumbling, post-apocalyptic cityscapes. I've got a rough work-up of the rules for a whole "region" that's city-themed, but testing it may have to wait at least a week for my printer to crank out all the modular skyscrapers I'm going to need to really make it shine.
My goal with fleshing out rules for a whole region? To have fun, to inspire others, and maybe, if I'm fortunate, either create something that the creator of Five Klicks might see as having potential to be an official release, or that, at least, might be a fun homebrew region that people can seek out when they get a little bored with the official stuff. We'll see. I'm open to feedback!
Labels: Five Klicks