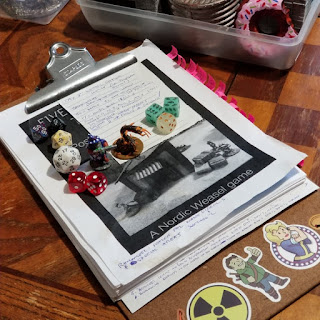 Every day that I play this game, I learn a new rule that I thought I understood but actually didn't read close enough. Case in point, after speed-reading copies of Hazy Cave and Factory 17 at work, I thought that I had to roll 3d6 and get all sixes in one roll in order to find the locations. Of course, I balked at this because it's so statistically improbable that it might as well be impossible in 10-30 campaign turns. What I didn't realize until this morning is that it's actually cumulative, like a search over time, which is much more reasonable, and actually pretty cunning and cool, design-wise.
So of course, once I realized this, I thought, better wait until my squad is tougher before I seek these places out, so I stopped rolling for them every turn.
I was also pleasantly surprised by my rolls for the upcoming mission. Not only did I manage to tame a Waste Digger, but I also rolled low for the number of enemies in my next encounter. Thank goodness too, as we'll be facing Hunter Bugs, and they look brutal. 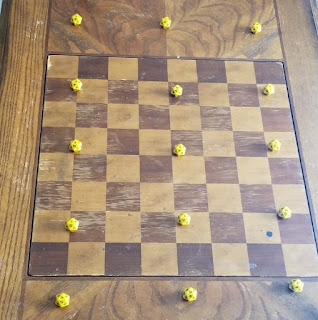 As such, I went back to my take on the classic terrain generation, figuring it might keep the game from potentially becoming unbalanced in one way or another. 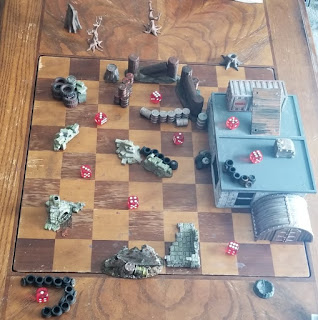 I was a little generous with the Suspicious Activity Markers, though, rolling one for every spot that looked like it should have one. I was pleased that the building with the survivor nest-type thing on the roof generated two, giving me an excuse to put two corpses on the roof.
I later added one more, because the battlefield conditions told me to put one in the center of the table. 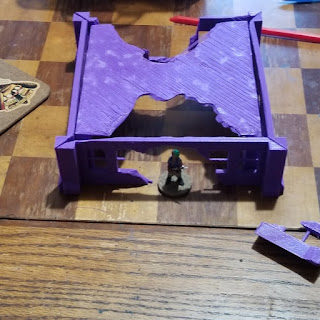 As part of my upcoming test of mixing Five Klicks rules with Bug Hunt rules in order to create raids in a crumbling urban cityscape, I designed and started test printing the materials for some modular skyscrapers. So far, I've only got one floor done, and it represents about 10 hours of printing, but I'm persistent, patient and eager to print up an intense tabletop for some awesome future missions.

And of course, once these designs are printed, proven, painted and in-play, I'll be uploading them to Thingiverse for free printing for anyone who also wants to make their own crumbling cityscape.
I also decided (today) that I'm going to start a page just for the "mods" I'm creating and using for my campaign. It'll be updated periodically with new content.
Labels: Five Klicks