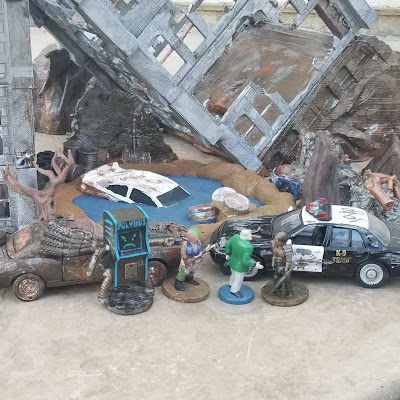 From the Journal of Maya Ceros, Day 10.

After we broke from the fungus-infested chunk of sprawl where we got stuck yesterday, we followed Thallo Greene out to a little watering hole where he's had good luck fishing before. I had my gun ready when we arrived, but blessedly, it was a quiet day where everyone got a chance to relax a little.

There were a few stragglers crowded around the watering hole when we arrived. Probably the most interesting one was this greenhorn named Larry Rollins who'd gotten a hold of an old cop car someone else had welded a dangerous-looking flamethrower onto. With Greene and Sally's help, we managed to give the new rookie a few pointers on how to tune the flamer so that it would be more likely to set his enemies on fire than it would be to set his own car on fire. That and some canned goods, and we had a new car in our convoy with some fun firepower for taking on the fungal horrors that seem to be getting more and more common the closer we get to the sprawl.* Even better, he paid for his meals in guns, and now we have a SAW and a really nice hand cannon to keep the squad alive in the wasteland.
While my squad took care of the trucks and spent our strength checking over all our gear, Daedalus went fishing, Henrietta went looking for hogs and Big Jimmy went looking for plants. When we got closer to the end of the day, I took a few of the squad out for target practice. You never know when you're going to need that edge to save the day. Hopefully never, but that day might also come a whole lot sooner than you'd like.
Henrietta:
Finds a single hog to wrassle. (St: 3 Sp: 5) Didn't find any trouble on the way there. She chases it down and catches it (Hog: 6, Henrietta: 10) She tries to wrestle it and hog-tie it, but it bucks her off (Hog: 8, Henrietta: 5) and gets away. Henrietta is unharmed.
Daedalus:
The watering hole turns out to be a good place to fish. Daedalus takes the time to go after four fish. Fish 1: 4,4; Fish 2: 5,1; Fish 3: 5,6; Fish 4: 3,4. Goes after Fish 4: Tries to catch it four times, then finally lands the hook. The two battle, but the fish gets away and does not return. Daedalus goes after Fish 1: Lands the hook on the first try, then battles. The battle starts with a draw, and then the fish gets away and does not return. Daedalus then goes after Fish 2, which he catches. Daedalus then goes after Fish 3: He waits a long time, and finally lands the hook, then makes a couple of strong wins, dragging the fish in. The fish gets right to the shore, then breaks away and doesn't return. Disheartened, Daedalus looks at his one catch (Strength 1) and is too embarrassed to show it off, so he throws it back. (+1AP) He doesn't run into trouble.
Big Jimmy:
Rolls a 1 and finds out he has no skill for Brewing, so he tries Herbalism instead and finds he has a bit of a knack for it. He sets out to find an herb patch and doesn't find one. What he does find is trouble. A member of a trained militia with a civilian carbine crosses his path and takes aim. 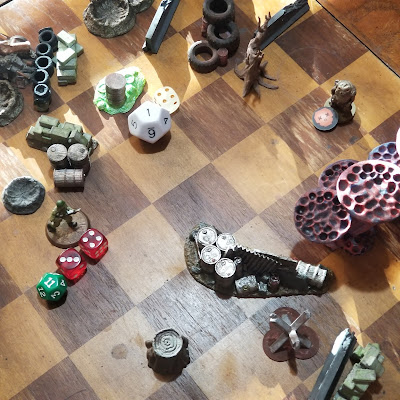 The soldier gets the drop on Big Jimmy and grazes him with a bullet. 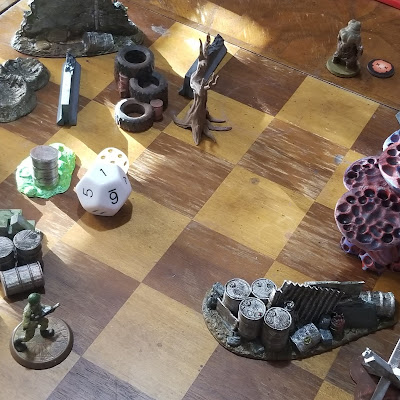 Big Jimmy calculates the distance between himself and the soldier and decides to bug out before he ends up dead.
*
No XP gained. No MVP.
4 AP spent on training.
Trade: SAW and Fine Quality Hand Cannon
Convoy levelled up! +1 to SECURITY!
Kassandra leveled up! +1 to Nerve!
New recruit: Larry Rollins, a Rookie. 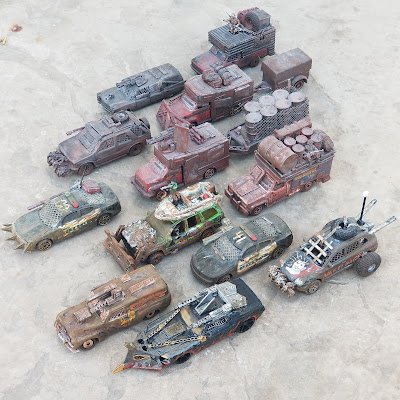 * In my rolls, I got "Find Resources" as the encounter (a chance to get a +1 to security, which we got!) and "Busy Market" as the Settlement Event. For my recruitment roll, I got a rookie and for the trade roll, I got a couple of weapons, so I just mashed them all together. 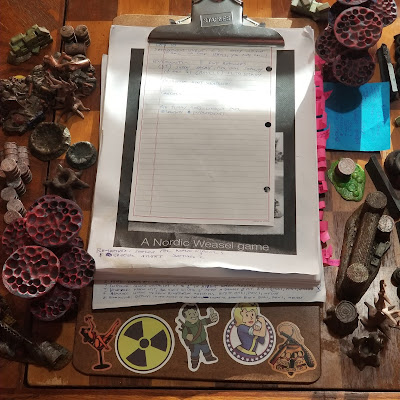