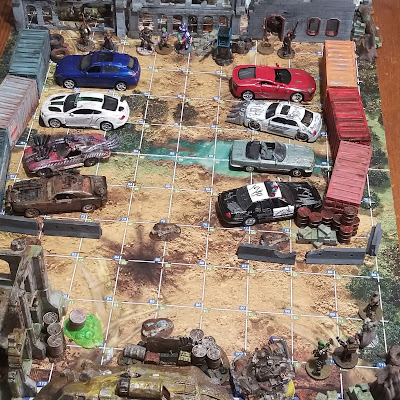 From the Journal of Maya Ceros, Day 13.

Greene has some interesting stories. Last night, he started telling us about a place somewhere nearby that locals call "The Hazy Cave." Apparently, the place is some kind of cavern complex that hides ruins of the old world. It's said there's tech out there, and maybe even a haul big enough to make braving the dangers worthwhile. We listened to Greene's stories in awe, and the next morning, I organized patrols to seek out this place. We found a nice chunk of sprawl to settle into until our people come back with news and a location for the caves.

Of course, if you stay parked too long in one place in the wasteland, you're bound to run into trouble. 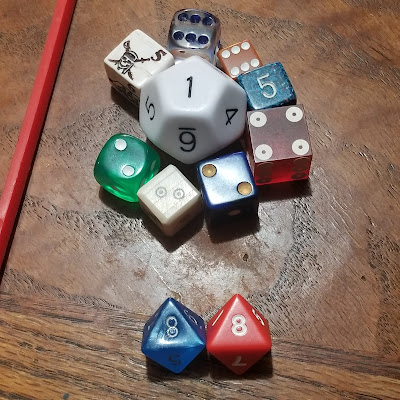 Sally, Merlin and I heard the rabble of desperates before we saw them, and with some quick gestures, I got the squad in line. 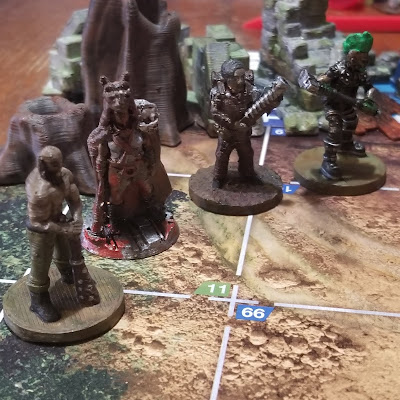 There weren't many-- just the four, and they looked pretty ragged.* 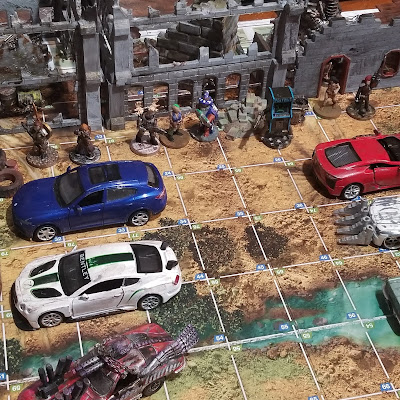 The spot we'd picked was open and narrow, just the ruins of an old parking lot turned kill-zone. 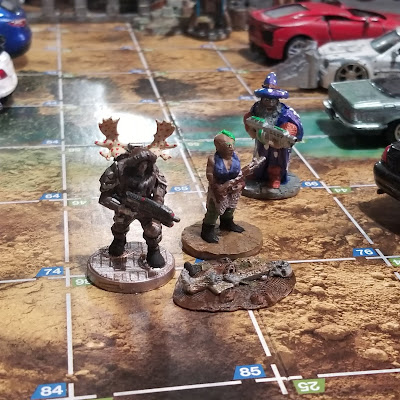 Merlin, Sally and I were the first to advance, closing on a corpse in the open. 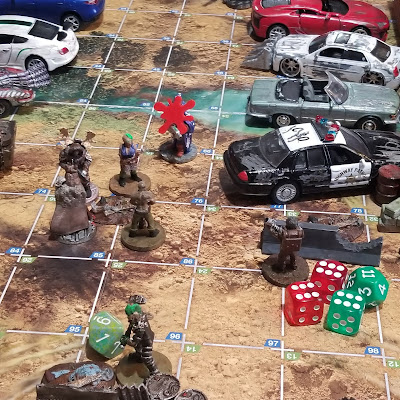 Rushing in, I was confident, figured that the desperates would be little more than an annoyance.
And then the guy with the musket fired and dropped Merlin cleanly. 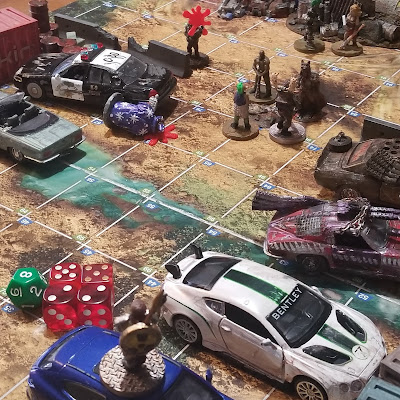 I saw the crazed grin on the face of the guy with the musket, and I saw it drop as the laser-sight of Kassandra's Needle Rifle lit up his chest. In the space of a breath, he was down, face-first in the dirt. 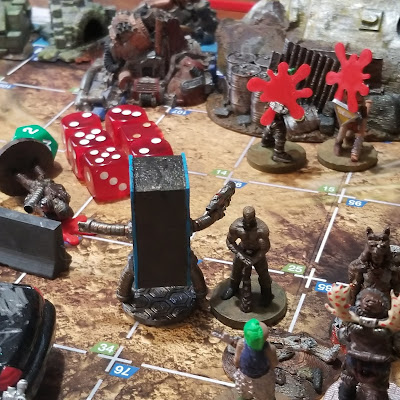 Another desperate appeared, shouting at us, and then I heard the whirr of Polybius's booster implant kicking into gear. When his heavy machine gun started chattering, I saw two of the thugs fall to the fire. 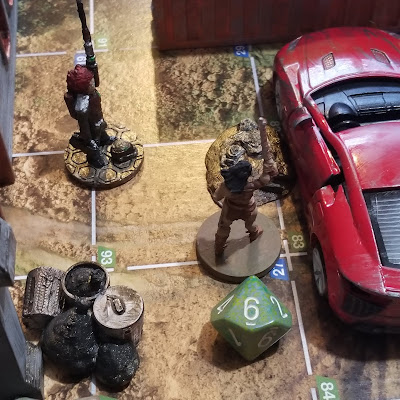 Dora closed on one of the corpses, but found nothing interesting. 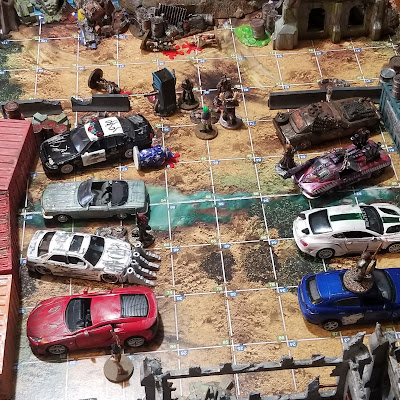 Kate was the last to move, closing in on another corpse. 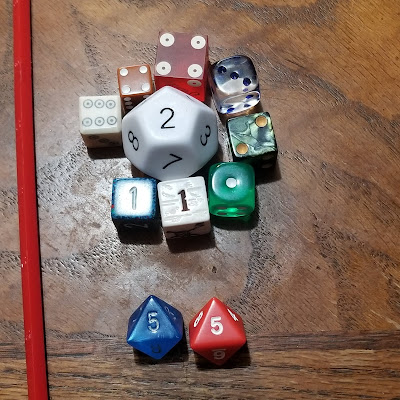 I think the desperates were taken aback by having half their number cut down in seconds. We got a solid jump on them before the dust could even start to settle. 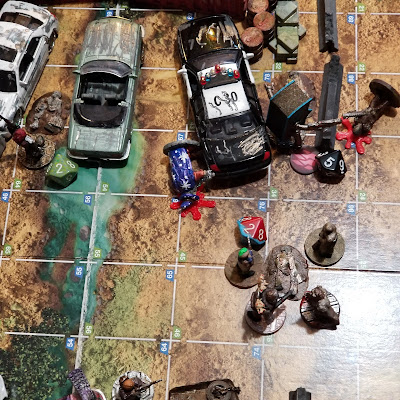 Sally, Kate and Polybius quickly closed on the closest corpses and searched them for anything useful, but unfortunately found nothing. 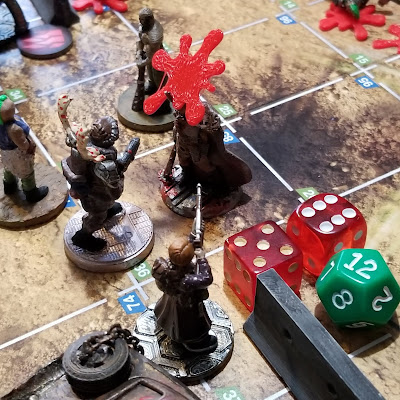 I heard the clack of Nike's shotgun, and then the desperate closest to me dropped like a sack of potatoes. 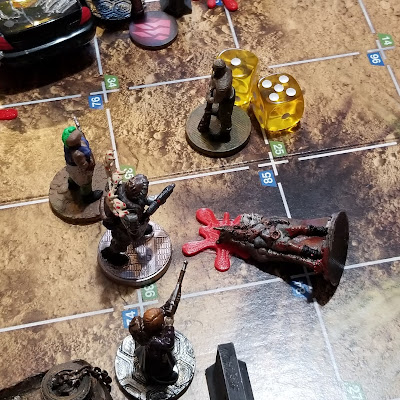 The last of the desperates seemed to panic then, sprinting back into cover. 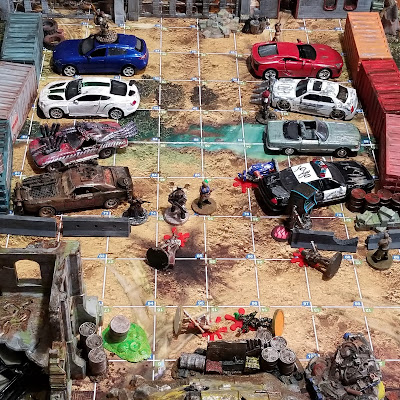 We started closing in on him, ready to drive him off or take him down. 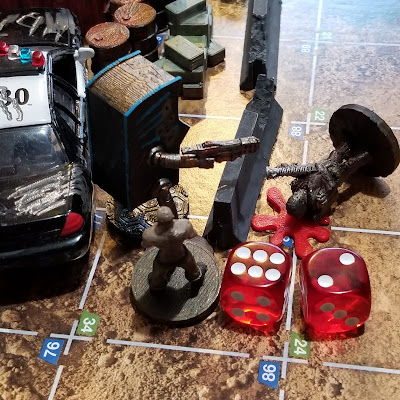 Instead, he whipped around the corner and took a swing at Polybius. His club arced in, only to be caught by one of Polybius's huge metal hands. 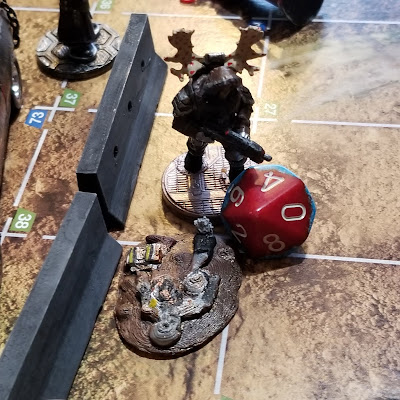 I knew Kassandra had him in her sights, so I closed in on the closest corpse and started picking through it, finding nothing. 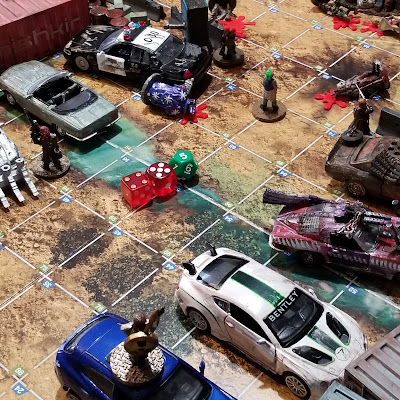 And when Kassandra's Sharp Shooter Rifle barked, the round cut down the last of the thugs with terrifying accuracy. 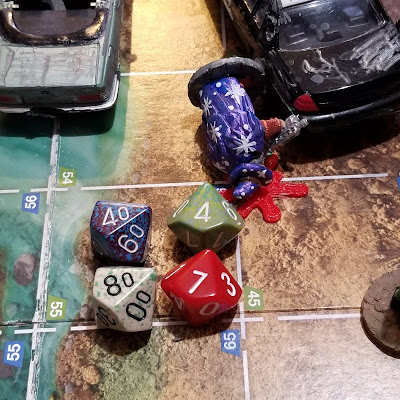 Kate whipped out her Diagnoser and hurried over to check on Merlin. Fortunately, his wounds were superficial and won't be enough to slow him down any. 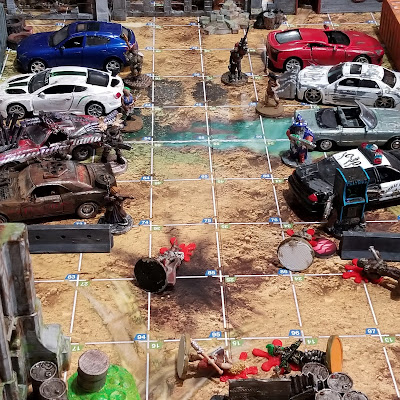 With the latest threat cleared, we settled back in and waited for the patrol to return. 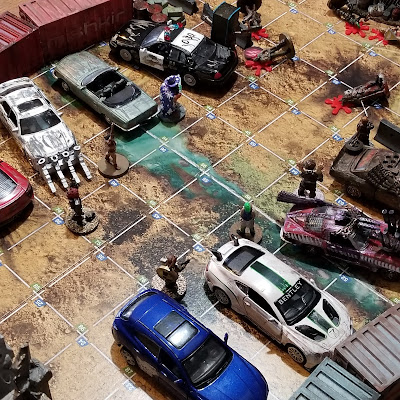 Kassandra is MVP
All others gain +1 XP
3 AP spent on Scout Patrol, 2 AP spent on training.
Loot: Stim-Pack
Trade: Med-Kit & Military Armor
Convoy did not level up.
Merlin leveled up! +1 to Speed!
Maya leveled up! Gains Talent "Busy Beaver"
New Recruit: A Caravan Guard From A Tiny Settlement
Progress Toward finding The Hazy Caves: +1 (1 of 3)
Daedalus goes fishing and finds a "Pretty Decent Spot" with three fish. Fish 1: 5/5, Fish 2: 6/2, Fish 3: 6/2. Daedalus goes after Fish 1, trying to catch it until it swims away. Fish 2 and 3 are too cunning for Daedalus to hook with his current fishing level, so he packs up and goes home. (+1 AP)
Big Jimmy goes in search of herbs and finds a patch with a single herb in it. He does not run into trouble, but instead harvests some sprawlwort to add to his garden.
Henrietta goes in search of hogs to wrestle and finds a pair of them to wrassle. She does not run into trouble. Hog 1: 5/2, Hog 2: 6/3. She attempts to catch Hog 1, but it outruns her and the hogs get away.
*Post Play Notes: So, this was amazingly lucky, getting this few enemies. Basically, I sent out a patrol, rolled one for number of encountered enemies, and then got the settlement event that knocked one enemy off the amount encountered. I was surprised by the lucky rolls, but it was nice to have an easy encounter.