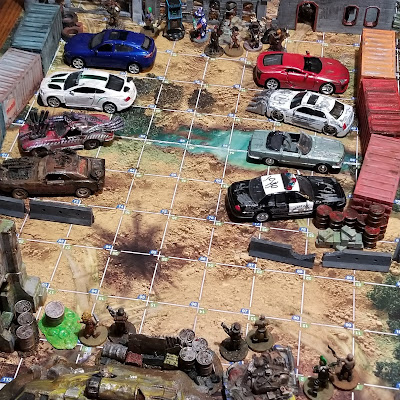 From the Journal of Maya Ceros, Day 14.

If you stay parked too long in one place in the wasteland, you're bound to run into trouble. Yesterday, it was just a pack of four desperates. Today, it was eight petty bandits, and they were more heavily armed.

I sent out scouts this morning to look for Greene's Hazy Caves and to check the area nearby for trouble. At one point, they spotted a nasty-looking pack of fungus-infected dogs heading toward the spot we've staked out, but they managed to lead that group away.* What they missed, however, was the pack of bandits stalking them, watching them lead the bigger threat away.

All I can figure is that their greed got the best of them. They must have seen our lights and smoke, heard our laughter and music in the night and figured we weren't likely to be well prepared this far out from any settlements or caravan routes. Maybe they thought our pack of scouts was our only protection. They probably thought they'd found a ripe haul just waiting to be picked. What they found instead was death, swift and terrible. 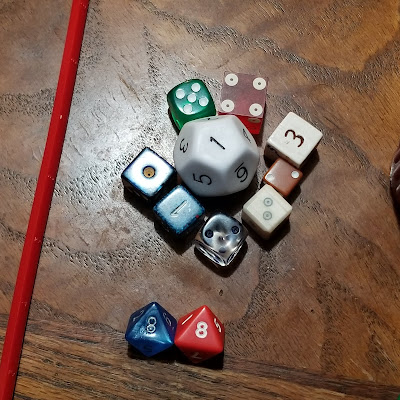 They entered the same way that the desperates did, coming in through the crumbling sprawl and into the parking lot just beyond where we've circled the wagons. Merlin and Polybius were watching the ruins, spotted the bandits before they even entered our killzone. Silent gestures passed, and then there were five of us with boots in the dirt, rifles ready. 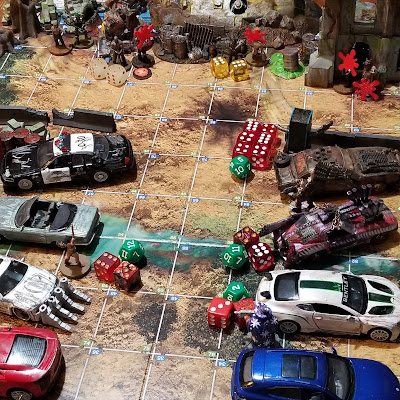 I heard the whirr of Polybius's booster kicking in, and as we all stepped out into the open, I heard the chatter of his machinegun and of military rifles. Four of the bandits were cut down before they even realized they'd been spotted. 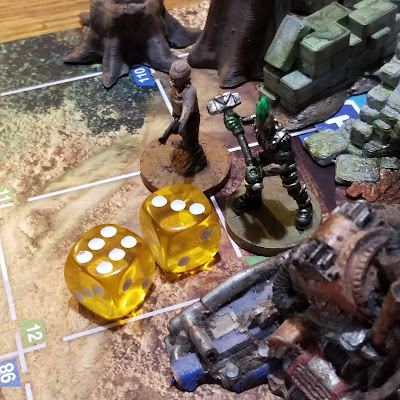 Two of the bandits turned and fled immediately, and then a third bailed after he realized almost his entire pack of neer-do-wells was gone. 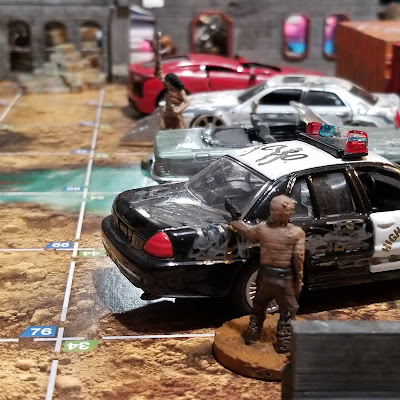 The last of the eight must have been the most desperate (or crazy) of the group, because he dashed for cover, waving his pistol, and tried to take aim at Dora. 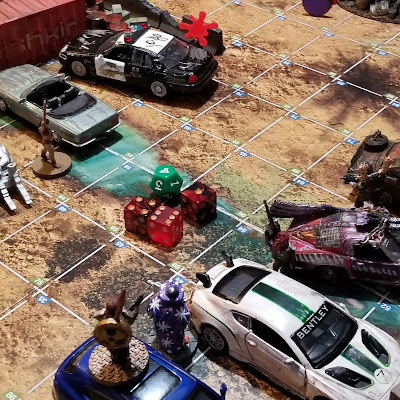 Kassandra, climbing onto the roof of a nearby car, took aim with her needle rifle and dropped the last bandit with a clear shot before he could even steady his hand and fire. 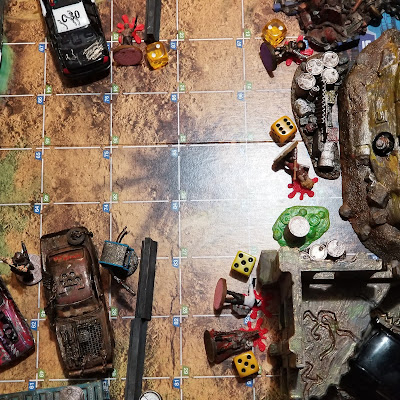 We checked the bodies for anything useful, but the equipment we did find wasn't worth salvaging. 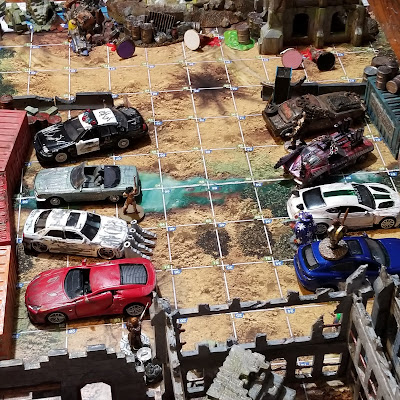 As soon as the patrols came back, I called for the Convoy to start rolling again. This area's getting too hot. Time to pack it in, make tracks, and start looking for The Hazy Caves somewhere else. Also, thinking about how we might have had trouble with those fungus-infested dogs if luck hadn't been with us got me thinking-- maybe we should wait a little before we rush out to find Greene's Hazy Caves. My squad could use some grit, and I'd like to see them tougher before we take on some of the stuff Greene talks about that might be stalking the caves. We've reached a good groove as a team, and I think if we can hit it hard on the training every day, I can bootcamp my squad into top form in no time.
*
Polybius is MVP
All others gain +1 XP
3 AP spent on Scout Patrol, 1 AP spent on training.
Loot: Hand Cannon
Trade: Scrap Armor, Ever-Cell, Schematics (Scrap Rifle) Needle Rifle
Convoy did not level up.
Polybius leveled up! Gains the Talent "Careful Deployment"
New Recruit: An unnamed Rookie
Progress Toward finding The Hazy Caves: +0 (1 of 3)
Big Jimmy prepares a dose of Sprawlwort to give Daedalus an advantage in fighting fish. He then goes in search of herbs and finds a patch with two useful herbs in it. The two herbs he relocates to his garden are Wasteland Henbane and Nuclear Chicory. This puts his herb garden at 6 herbs, so it now adds +1 to the SUPPORT factor of the Settlement. He does not run into trouble.
Daedalus goes fishing and finds a Pretty Decent Spot with three fish he can try to catch. Fish 1: 1/2; Fish 2: 2/4; Fish 3: 6/5. He attempts to catch Fish 1 and quickly hooks it, immediately reeling it in. He then attempts to catch Fish 2 and hooks it. He battles it, but it gets away. Fish 3 is too cunning for Daedalus to catch at his current fishing level, so he makes his way home. Fish 1 is too small to be worth much to Greene, but it tastes great on the fryer.
Henrietta goes in search of hogs to wrestle and finds a whole passel (5) of hogs to wrassle. Hog 1: 4/6, Hog 2: 5/3, Hog 3: 6/5, Hog 4: 2/3, Hog 5: 5/2. She decides to try to wrassle Hog 4 and easily catches it. Unfortunately, the hog bucks her off and kicks her. Henrietta is now Worn. She does not run into trouble. 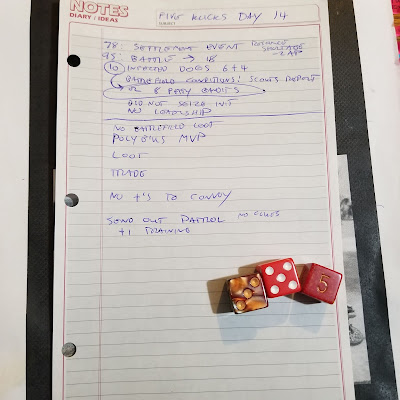 *Post-Play notes: I have to admit, I was nervous when I rolled up TEN "infected dogs" to face on this map, but then was pleasantly surprised when I rolled a "Scouts Report" battle condition, allowing me to roll up a second force and pick one to fight. The petty bandits were no match for my hardened wasteland survivors, and with the help of some good rolls, I managed to obliterate the opposing force before the first round was even complete. Definitely a feather in my cap, feels like.
Also, check out this roll for the next Campaign turn. What are the odds of that? Best part is, I designated colors before I rolled (one set for Settlement Event and one set for Encounter) and rolled them together! 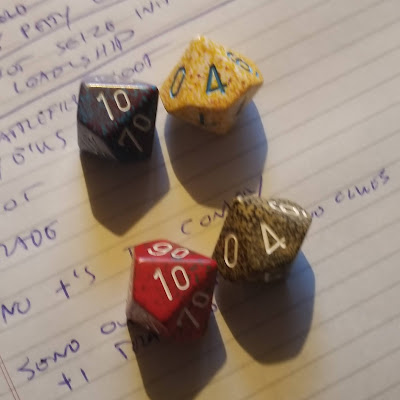