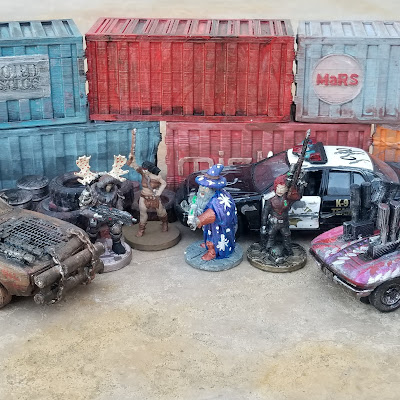 From the Journal of Maya Ceros, Day 15.

I talked more with Greene last night about his Hazy Caves. He doesn't know where they are exactly, but he has an idea, and there are certain landmarks he remembers that should lead us to them eventually. We kibitzed a little on the details, and talked about how to best get prepared for what we might find inside. Personally, I'm hoping that there's some secret in there which might reveal how everything ended, but the extra tech that might be in there would be a nice bonus as well.

Today, though-- well, today was uneventful. We found a new spot to park and cool the wheels and I used the opportunity to push Kate and Merlin through some intensive training. Greene was feeling generous with the trading (it's probably all the fish that Daedaelus has brought back for the fryer)* so we were able to turn some salvage we rooted out of the nearby ruins in for a nice SAW and a Med-Kit. There isn't a day that goes by that I'm not grateful for having Greene on my B-Team.

Convoy did not level up.

A recruit joins the Convoy: An Explorer From A Pre-Collapse Military Base

Big Jimmy prepares a dose of Sprawlwort to give Daedalus an advantage in fighting fish. He then goes in search of herbs and finds a patch with two useful herbs in it (Mourningberry and Blistering Nettle). He adds these to the garden. He does not run into trouble.

Daedalus goes fishing and finds a "Pretty Decent Spot" with three fish available to be caught. Fish 1: 2/2; Fish 2: 3/5; Fish 3: 2/5. He starts by attempting to catch Fish 1, hooks it after a little noodling, then easily reels it in. He then goes for Fish 2, but it gets wise and he has to do a little work to finally hook it. He battles the fish and almost brings it in, but it ultimately gets away and his rod breaks. Disheartened, Daedalus returns to the Convoy with his single Strength 2 fish and gives it to Greene for the fryer. (+1AP)

Henrietta recovers from being Worn.

*Post-Play Notes: ah, another easy day. Settlement event: Economic Upswing. Encounter: Find Resources: Security. For better or worse, Security is already at maximum, so no effect. I guess we found an ammo dump to keep our guns firing? Sounds good to me.