Day 16: Into The Mouth of Fungus (Five Klicks) 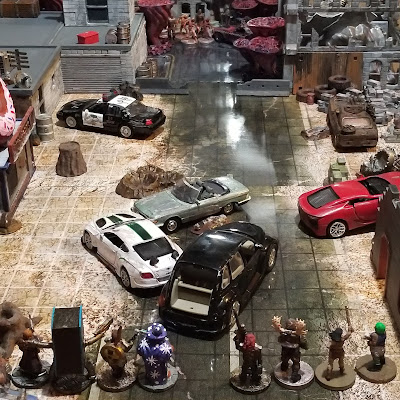 From the Journal of Maya Ceros, Day 16.

I have a theory. I think I know why things fell apart.

We've been haunting the edges of the crumbling sprawl for days. First it was a few scattered holes packed with sickly nests of fungal-infected horrors. Now, it's almost every day. Even in that last group of bandits, a few of the guys had pock marks, sores and growths mottled with fungus. Why we haven't been infected, I don't know. Maybe we're immune. I hope we're immune.

Talking to Greene, I found a spot nearby where I thought we might find some parts for our convoy or something else to give us an edge. When we hit the dirt, it became clear that we weren't alone, that the ruins were alive with the infected. 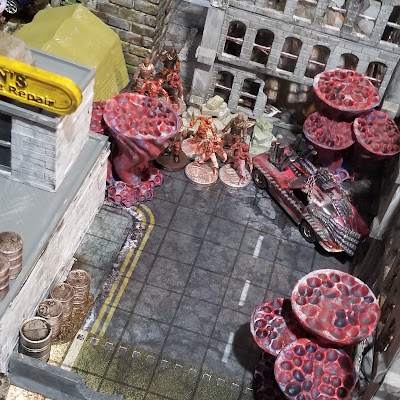 These horrors were different from what we've seen before though. They were slower, juicier, buzzing with flies, and with nothing but the fungus holding them together.* 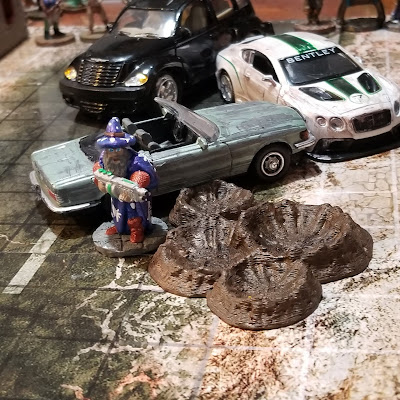 Merlin used his talents with infiltration to get a lot closer to the enemies than the rest of us. 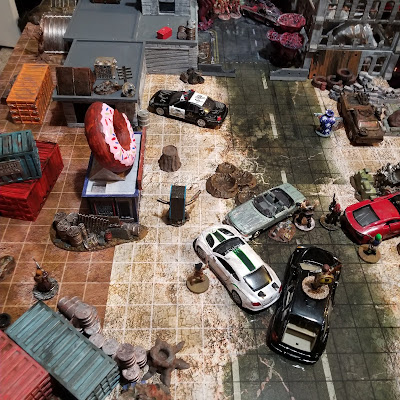 Even still, these things were slow, really slow, slow enough that we got the jump on them and were able to close with them and spread out into a good firing line. 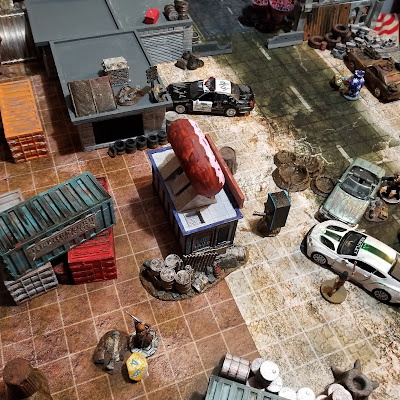 Merlin and Nike picked through the remains of a couple of people who looked like they'd been chewed on, but they found nothing. 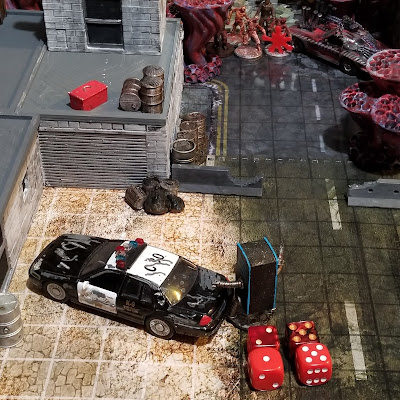 Polybius stepped up and fired with his newly-recovered needle rifle, dropping one of the horrors immediately. 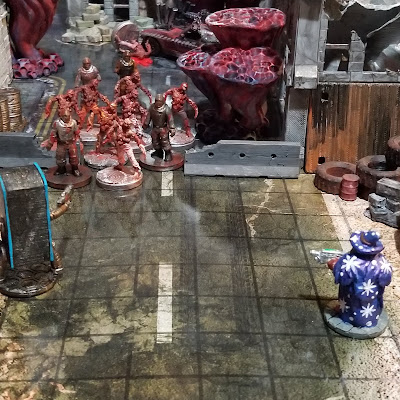 But the horrors kept coming. 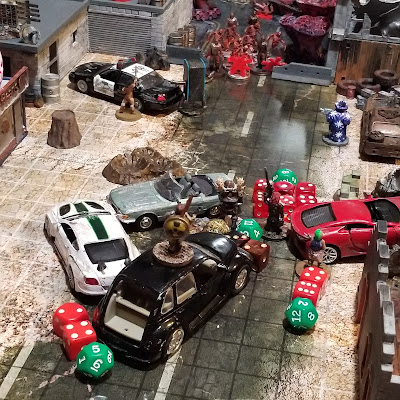 Kate, Sally, Kassandra and I fired from our positions and dropped some of the horrors, but it wasn't enough. We sprayed bullets, but the wall of hungry meat kept coming. 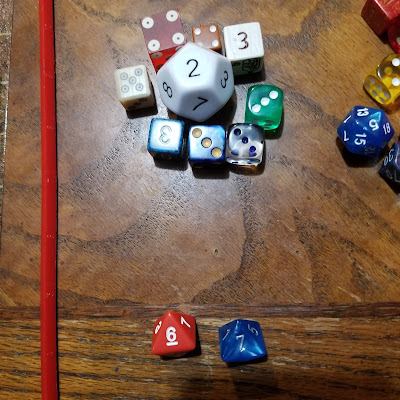 Polybius, Merlin, Kate and Sally were quick on the draw. 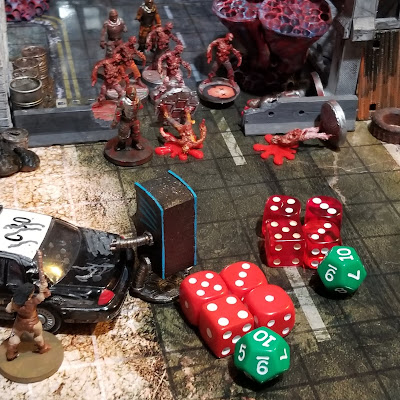 I heard the whirr of Polybius's booster implant coming online, but even spraying multiple bursts from his needle rifle wasn't enough to drop the horrors. 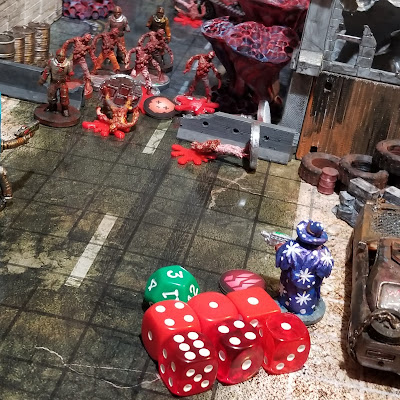 Merlin's heavy machine gun chattered, but couldn't drop more than one of the horrors. 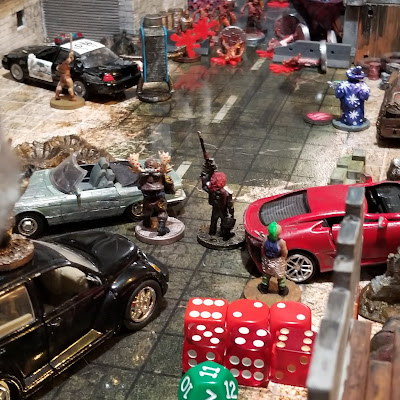 Sally's shots were much more precise, though, cutting a sharp line through the head-meats of a pair of shamblers. 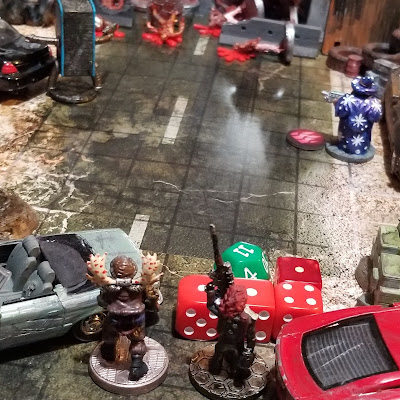 While Kate's gun mostly just made a lot of noise. 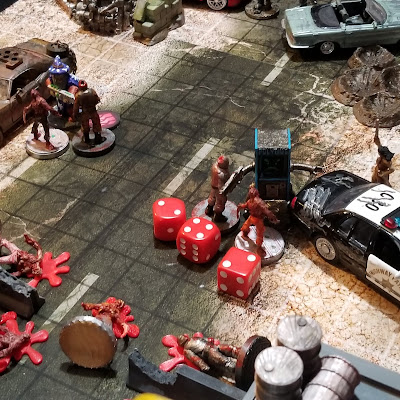 The horrors closed and started clawing at Polybius. 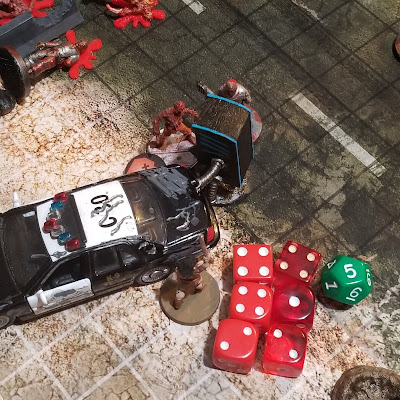 Dora wasn't having it, but she also wasn't able to stop it. 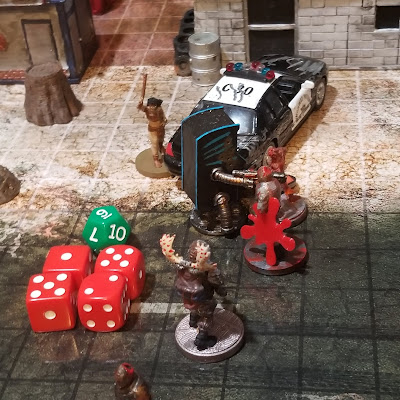 Seeing my best squadmate in trouble, I rushed in and squeezed off a burst from my machine pistol, dropping one of the horrors, but missing the other. 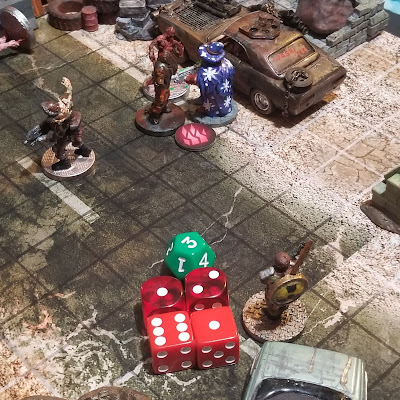 Kassandra moved in to try to get some of the horrors off Merlin, but the shots went wide. 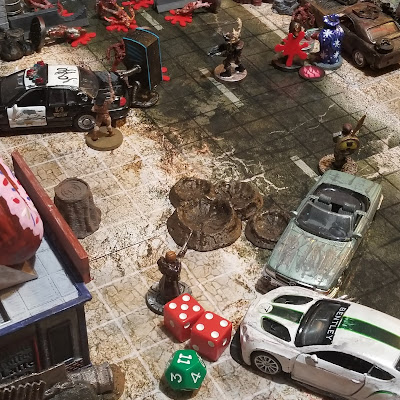 But Nike's shot was clear and precise, cleanly blasting the closest of the horrors. 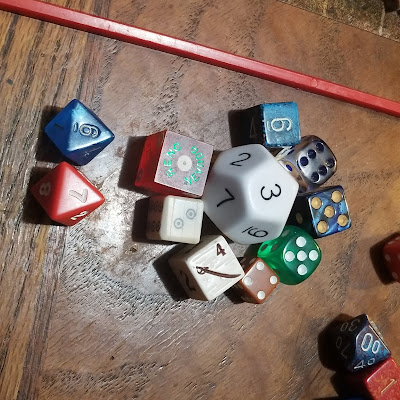 Motivated to save our friends, Kassandra and I moved fast. 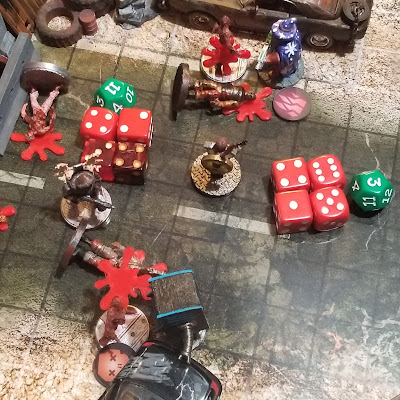 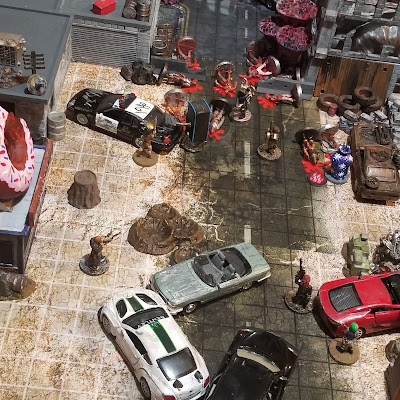 Clean-up was going to be a mess, I could tell that much, but I also wasn't inclined to move out of the area quite yet. We still had clues to search for, and I had a vain hope that maybe, maybe, we could find a lead on Greene's Hazy Caves.
I just hope those caves aren't full of more infected.
Who am I kidding? I'm sure they will be.
*
Sally is MVP
All others gain +1 XP
6 AP spent on training.
Loot: None
Scrap found! (Event): +1 Scrap
Trade: Scrap Armor, Camo-Cloak, Defusing Tools Needle Rifle
Convoy did not level up.
Sally leveled up! Gains Talent: "Recruiting!"
Kassandra leveled up! +1 to Toughness!
Polybius leveled up! +1 to Toughness!
New Recruit: A Military Serviceman from a Stable Settlement
Progress Toward finding The Hazy Caves: +0 (1 of 3)
Big Jimmy prepares a dose of Sprawlwort to give Daedalus an advantage in fighting fish. He then goes in search of herbs but finds none. He does not run into trouble.
Daedalus goes fishing and finds a Pretty Decent Spot with three fish he can try to catch. Fish 1: 2/3; Fish 2: 4/2; Fish 3: 5/2. He attempts to catch Fish 1 and it gets pretty cunning before he hooks it. Unfortunately, it gets away almost immediately. He then attempts to catch Fish 2 and easily does so. He then easily reels it in. Bravely, he tries to catch Fish 3 and easily hooks it, then easily reels it in. For his catches, Greene rewards him with 1 Scrap, which he proudly adds to the stash. He levels up his fishing ability and is now FISHING (1).
Henrietta goes in search of hogs to wrestle, but finds none. She runs into trouble. 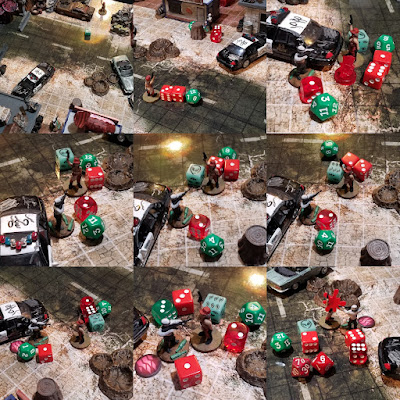 She runs into a scrag and decides to engage. They go about nine rounds before the scrag beats her down with his rifle and runs away. In the end, she's okay and will be ready to wrestle hogs again tomorrow.
* Post-Play notes: Blanks are fun. I like how they come in hordes.