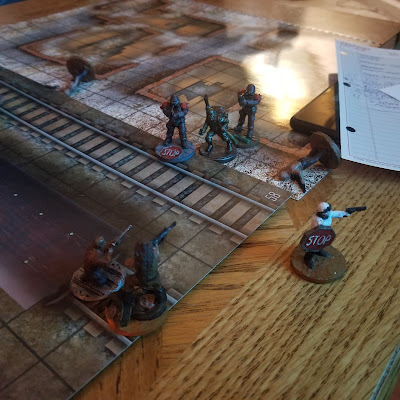 I'm honestly the luckiest man in the world. Wednesday, my wife expressed interest in getting into Five Klicks and so yesterday after work we rolled up a Squad to split and I taught her how to play. Our first campaign turn lasted about an hour and ended pretty good-- we faced off against 6 Prepared Bandits and, after picking up an extra loot roll from a Suspicious Circumstances marker, ended up holding the field. The prize of the day? A SAW, as loot for Campaign Turn 1! 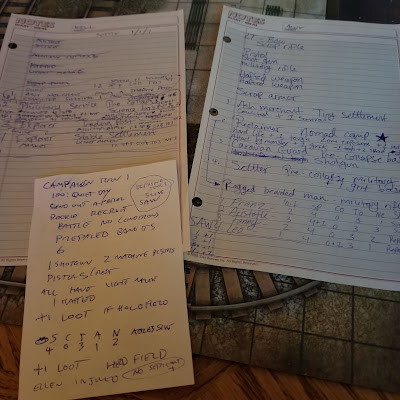 As an introductory session, it was pretty comprehensive. We faced off against enemies carrying several different types of weapons, got to see one of the bandits bail from a failed morale check and ended up with four casualties. Of those four casualties, we ended up with no deaths or broken equipment, only one injury (the leader of my half of the squad can only shrug off so much machine pistol fire) and my wife's leader actually got a point of grit out of the casualty roll. 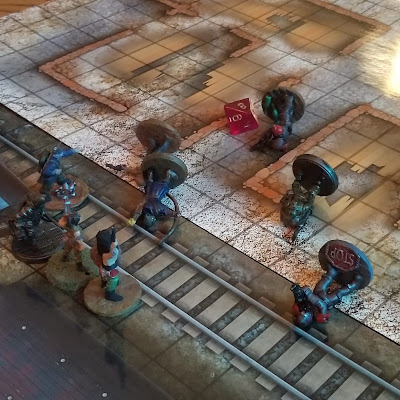 Mechanically, Five Klicks has no official Co-op mode that I've seen, so I adapted the instructions from Five Parsecs (3rd Edition) and changed a few things on the initial character creation. The biggest change was giving the squad two Leaders, each one leading three other characters. The Leaders got the usual 3 Events rolls, while we each gave one of our characters a single Event roll. It gave us a little advantage, but it wasn't too much of a boost. We then divided up the rolls for gear right down the middle, but rolled one extra melee weapon to make the number of melee weapons even.
We played on a board of Loke Battle Mats (I cut the coil-binding for more versatility) with minimal preparation and just went for it, having a blast in the process.
I'll post more about the campaign as it develops. The adventures of Franz, Fanny, Aristotle, Leo, Ellen, Loise, Gary and Duke will continue! 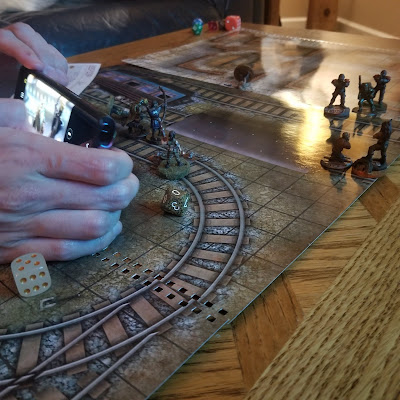