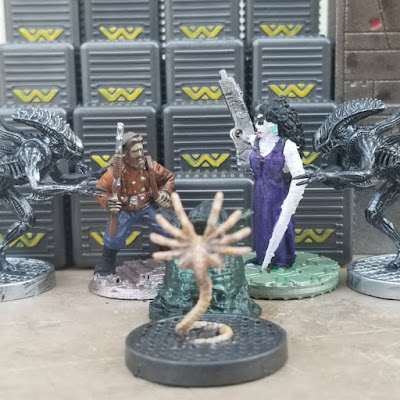 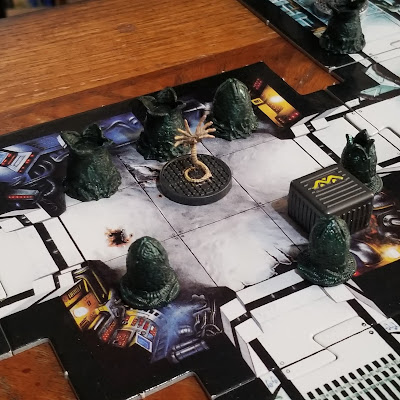 The Story So Far:
From the personal log of Station Security Officer Ellen Schwarzschild,
When The Company bought Tulloch Station, I thought it was a joke. Seegson had been running the place into the ground for years, was talking about closing the whole thing down and letting it fall into the gas giant LV-3940, which the station orbits. When Weyland-Yutani moved in, I thought maybe our fortunes had changed, like maybe the whole place was about to go hi-lux, VIP and classy as hell. When people started disappearing, I started snooping, and that's how I ended up with a front-row seat to a horror show unlike anything I ever dreamed was possible.
Xenomorphs. That's what the company stooge called them. Aliens. The perfect organism, the perfect weapon, and Weyland-Yutani had been breeding them in a lab on Tulloch Station, feeding the queen colonists and prisoners redirected from ships bound to other worlds. Problem is, the queen turned out to be a lot smarter than any of the suits from the bio-weapons division realized. Well, at least until it was too late. When they found the eggs one of her drones had been stashing in the tunnels near the reactor core, they didn't realize it was just one of many stashes. Within hours, the station was crawling with huggers, and instead of mounting a defense, The Company turned around and pulled out completely, evacuating key personnel and leaving the station to the bugs.
We weren't evacuated. We were left here to fend for ourselves against the aliens.
We can't leave. The station is quarantined and any ships that try to escape get nuked into oblivion.
All we can do is fight. Fight, and hope it's enough that we survive.
But hey, Tulloch Station's been home for a long time, and if the people left behind here with the bugs have any chance at survival, it'll only be because we did something. Me, and the squad I've gathered to stand against the hive.
The Roster:
There are currently no squads in play.
Unused Roster:
Everyone is currently in the field.
The Settlement:
Hiding in a sealed-off section of the station, The Settlement is currently a 1/1/2 Settlement.
Unused Inventory:
2 Scrap
Military Rations
Damaged Scout Armor
Those Who Have Been Lost: 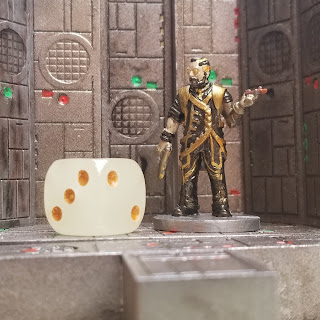 Darius Tyson came to Tulloch Station to meet a friend and pick up an order for a shipment of very expensive cigars. Shortly after he arrived, the station locked down and he got stuck. Good thing he's no stranger to using a gun.
Statistics: Settler; Trading Post; I (1) SP(4), CO(0), TO (3), NE (1); Speech +1; Lvl 0; EXP 0.
Model: From the New Angeles Board Game.
Infected by Facehugger on Day 1 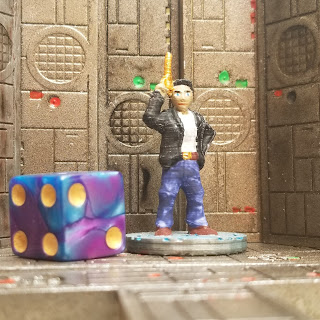 Ellen Schwarzschild was born to spacer parents running freighters for The Company. Before she came to Tulloch Station, she saw how corporate negligence could cost lives first-hand when a shipment of engineered plague got loose and infected the entire crew of her freighter. The plague ripped through the ship and killed everyone except Ellen, including her parents. When The Company tried to blame the leak on Ellen, she fought The Company in court until a settlement and a gag-order was reached. After that, she started working security on Tulloch Station, but couldn't keep her nose out of Weyland-Yutani's business when people started disappearing. By the time she discovered their dirty secret (that they were breeding xenomorphs on the station) it was too late. The shuttles packed with researchers took off, and Ellen was left to gather the survivors for a last stand against the alien hordes.
Statistics: Enforcer; Roaming Survivors; Leader; Lost Family; Accused; Got Revenge; I(3), SP(5), CO(+2), TO (4), NE (3); Pistol; Hafted Weapon; Smoke Grenade (x5), Field Armor; Lvl 0; EXP 2.
Model: 3D Printed Supportless model from Punkin' Figs.
Lost on Day 3. Officially listed as "Missing." 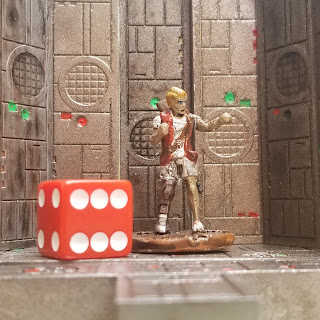 Chett Murphy is a bounty hunter who got caught up at Tulloch Station when a mark disappeared suddenly there. He lost his leg to a mark a while ago, but the mechanical replacement works well enough. When the station became overrun with bugs, he was one of the few able-bodied folks tough enough to stand with Ellen and her squad.
Statistics: Hunter; Isolated Enclave; Accident; I(3), SP(5), CO(0), TO (4), NE (2); Survival +1, Military Rifle; Field Armor; Lvl 0; EXP 2.
Model: 3D Printed model from Ill Gotten Games kitbashed with other elements.
Lost on Day 3. Officially listed as "Missing." 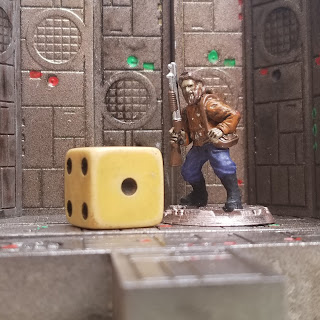 Henry MacReady is part of the old Seegson decommissioning staff that was in the process of scrapping Tulloch Station for valuable metals before Weyland-Yutani moved in. He knows all the little crawlways where the Aliens might hide, and he knows the ones that they're too big to fit into.
Statistics: Scavenger; Isolated Enclave; Accident; I(3), SP(4), CO(0), TO (5), NE (2); Shotgun, Bow; Lvl 0; EXP 2.
Model: Kitbashed Mantic and Bolt Action elements.
Lost on Day 3. Officially listed as "Missing." 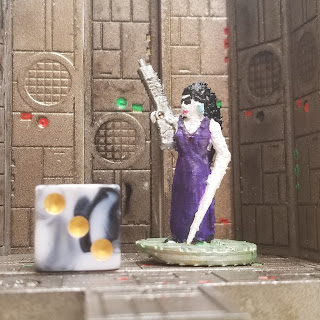 Angel is a combat synthetic, an artificial person designed to look like the women in the art of iconic 1980's artist Patrick Nagel. No one really knows why she's on the station, but she's been on Tulloch longer than Weyland-Yutani, so folks have found it easy enough to trust her against the bugs.
Statistics: Caravan Guard; Safe City; Accused, I (2) SP(4), CO(+1), TO (3), NE (2); Scout Armor, Military Rifle; Hafted Weapon; Burner Ammo (+1 Damage for 1 CT) Lvl 1; EXP 2.
Model: 3D Printed Supportless model from Punkin' Figs.
Lost on Day 3. Officially listed as "Missing." 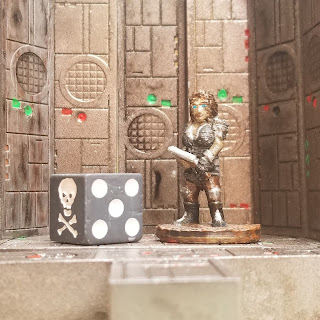 Joanne Winters has run her own hauler independent of The Company for years, despite their attempts to drive her out of business. Most of her cargo has been less than legal, and there are a lot of rumors around her ship and what she might have been hauling to Tulloch Station when all hell broke loose.
Statistics: Merchant; Science Base; Accused, I (2) SP(4), CO(0), TO (3), NE (1); Scrap Cannon; Speech +1; Lvl 0; EXP 2.
Model: 3D Printed Supportless model from Punkin' Figs.
Lost on Day 3. Officially listed as "Missing." 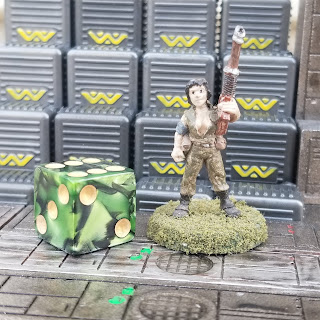 Louise Weaver was part of the station security team that tried to hold cooling array seventeen before they were overrun and scattered. She joined the settlement on Day 2.
Statistics: Enforcer; Science Base; I(2), SP(4), CO(+1), TO (3), NE (3); Repair +1; Military Armor, Scrap Cannon; Heavy Melee, Lvl 0; EXP 2. Grit +1
Model: Unknown metal miniature labeled as "Not-Ripley" which I purchased on Ebay 20 years ago.
Lost on Day 3. Officially listed as "Missing." 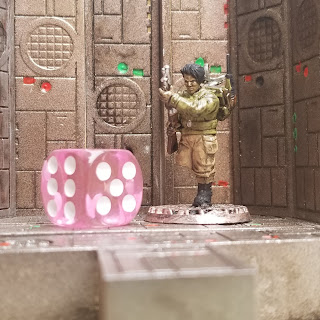 Ashley Thiessen is part of a survey team that was on a resupply run at Tulloch Station when everything went to hell. She's pretty sure her whole crew is dead, and she's pretty pissed about it.
Statistics: Explorer; Nomad Camp; I (2) SP(6), CO(0), TO (3), NE (2); Bow, Shotgun, Medical +1; Lvl 0; EXP 2.
Model: Kitbashed Mantic and Bolt Action elements.
Lost on Day 3. Officially listed as "Missing." 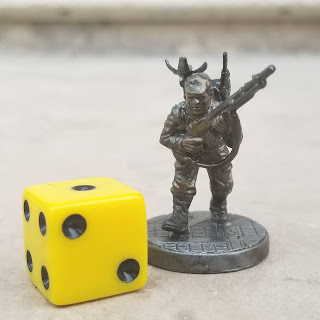 Abraham Fitzgerald was a junior technician on Tulloch Station who loved to tinker with the station tool fabricators. When all hell broke loose, he built himself a simple coilgun out of scrap capable of taking down Xenomorphs. He joined at the end of Day 2 as part of the rescue team led by Angel to recover the hived members of the Squad.
Statistics: Rookie; I (1) SP(4), CO(0), TO (3), NE (1); Scrap Rifle; Lvl 0; EXP 0.
Model: Kitbashed Mantic and Bolt Action elements.
Lost on Day 3. Officially listed as "Missing." 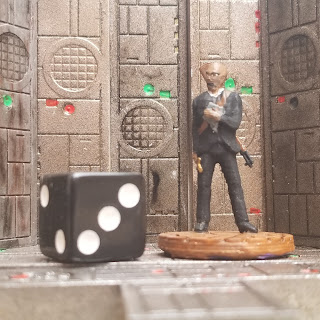 Father Constantine is on a mission from God, or so he says. I guess we'll just have to take his word for it, as he hasn't shared what exactly that mission is. Some folks say he came to the station after the evacuation order, and that he's got a personal vendetta against the bugs, but he's never confirmed or denied that's the case.
Statistics: Hunter; Stable Settlement; I(2), SP(5), CO(0), TO (3), NE (3); Survival +1, Civilian Carbine; Lvl 0; EXP 1.
Model: 3D Printed model from Ill Gotten Games kitbashed with other elements.
Lost on Day 3. Officially listed as "Missing."
Labels: Xenomorphs