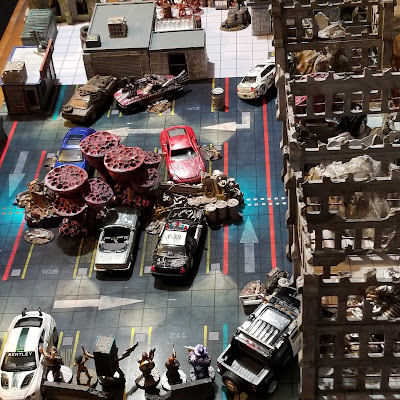 We've found it. Between Greene's knowledge and the search teams, we've found the entrance to The Hazy Caves. Somehow, I knew it was going to be surrounded by those fungal towers and a horde of infected. Somehow, I knew that all this was tied together. I have no idea what we're going to find inside. I just hope we're ready for it.

When we found the entrance, it was in a dead part of town with more bodies on the ground than you usually see. No signs of any recent habitation, but the infected were thick enough on the ground. 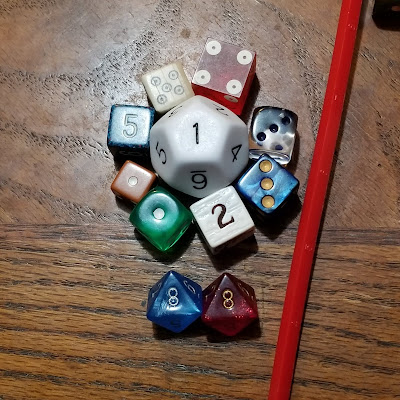 We were ready for the push. We've faced these horrors enough times that no one seemed to hesitate to move in and clear the place out. 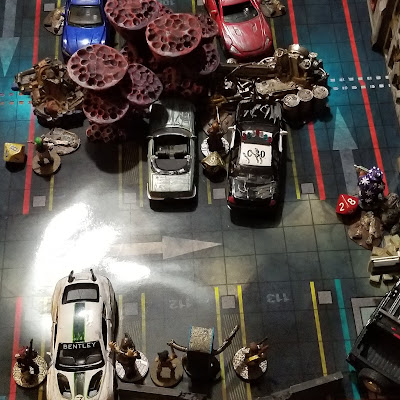 Merlin, Nike and Sally moved up to check some of the closest bodies. Two of the corpses yielded some useful scrap, and as Sally was picking through hers, she noticed another couple of them tangled up outside a car a few meters away. 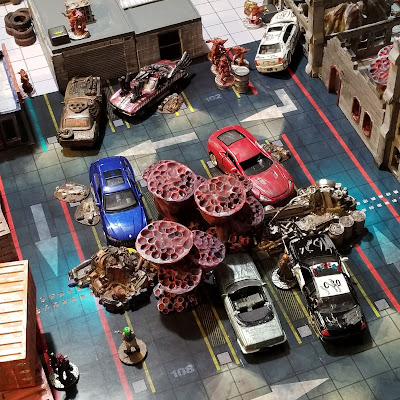 I heard the snarls, spitting shrieks and howls of the fungal horrors as they rushed at us, making enough noise that if there were others nearby, it wouldn't be long before they too were drawn into the fight. 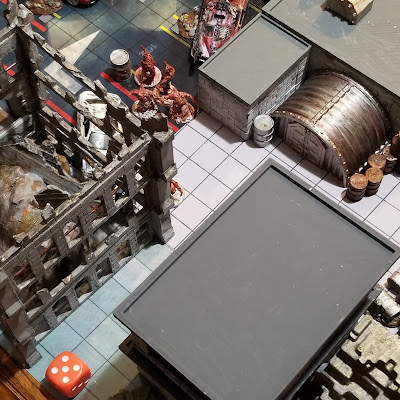 I've gotten used to fighting these things, but the longer we stay on the battlefield, the greater the chance that I could lose one of my people. 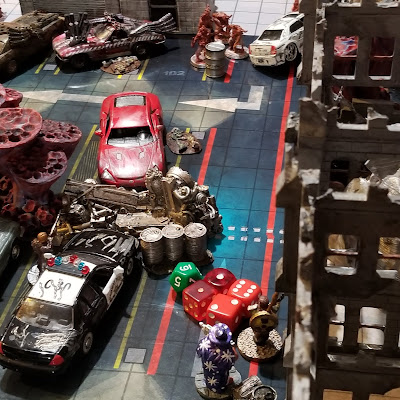 I heard Kassandra's needle rifle hammer out a swarm of rounds, but none of them found their mark. 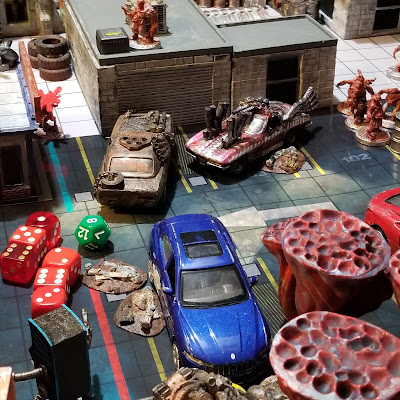 Polybius rushed up, kicking his Booster Implant into gear, and laid down a hail of heavy machine gun fire that dropped the closest horror to him. 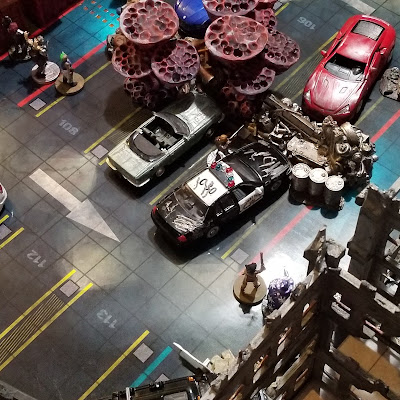 Dora, Kate and I closed ranks. Our eyes were on the closest corpses, wide with the hope that they might be clutching something useful. 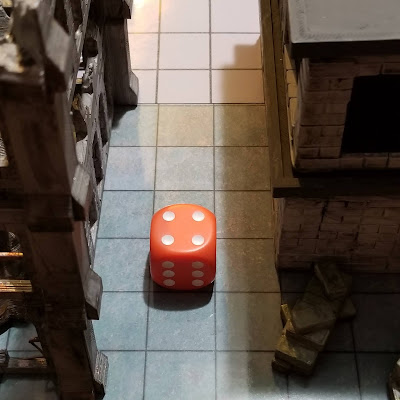 There were snarls in the distant ruins, but no more horrors lurched out of the shadows to come after us. 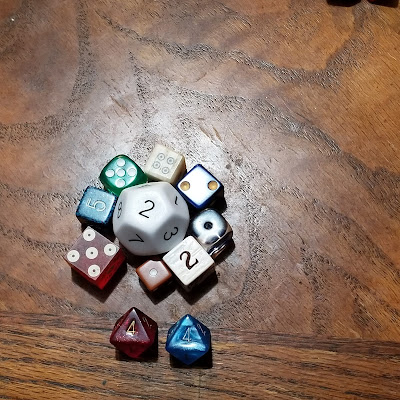 Dora, Nike, Kate and Merlin were quickest on their feet as the horrors advanced. 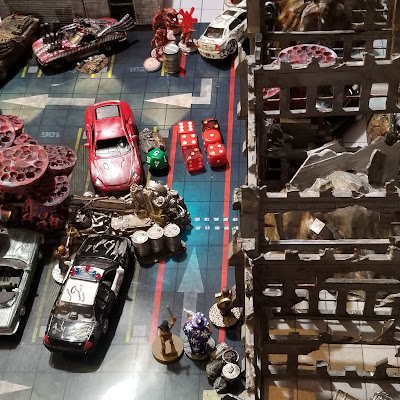 Merlin was the first to fill the air with lead, dropping one horror and wounding another. 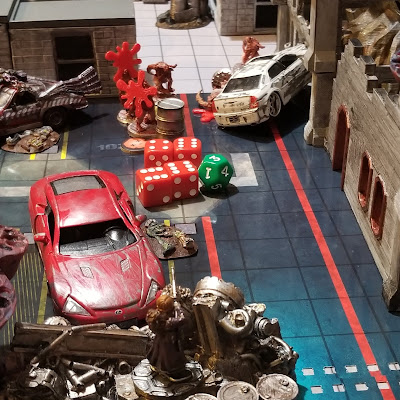 Mounting the closest pile of junk, Nike turned her needle rifle on the horrors and cut two of them down. 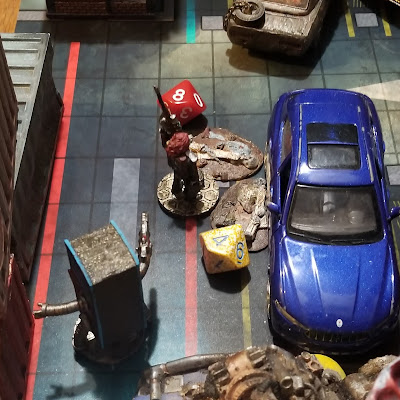 Kate searched a pair of corpses that were tangled pretty much one on top of the other, but only found a little scrap between them. 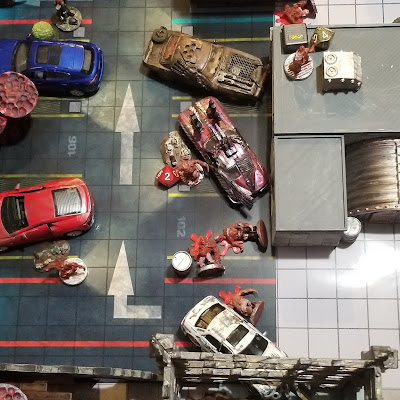 The remaining fungal horrors sprinted through the ruins toward us, stopping only to stir up the dust and howl. 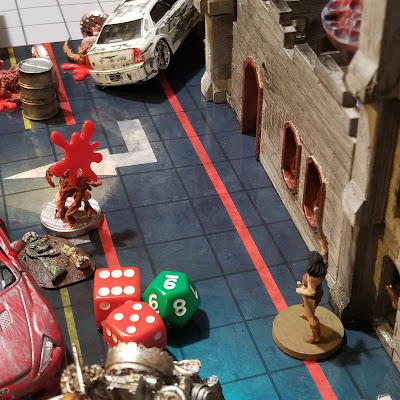 Seeing one of the horrors closing in on a nearby corpse, Dora stepped up and gibbed him with her shotgun. 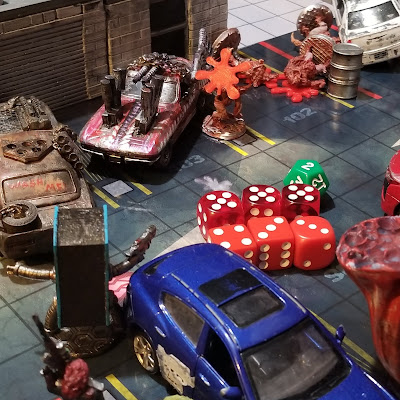 Polybius was quick to get more lead in the air, cutting down his closest horror. 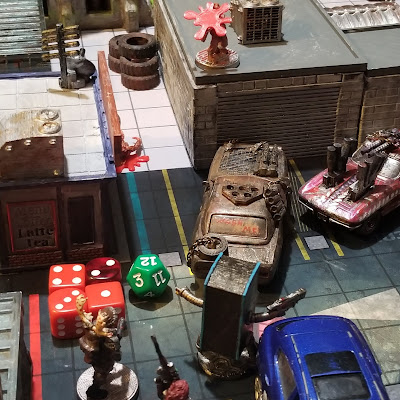 That was when I moved in. Eager to finish the fight, I laid into the last of the horrors with a spray of machine pistol fire. 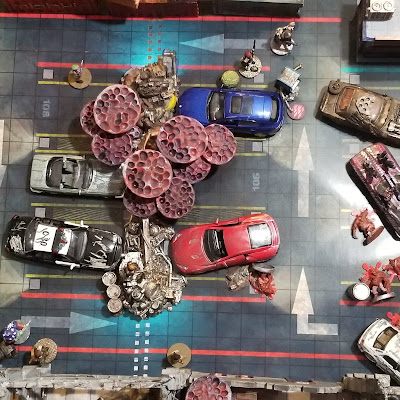 All-in-all, we cleaned out the horrors around the entrance to the caves pretty easily. Once we got the area secure, we settled in and got ready for the trip into the depths. Preparations would take the rest of the day, and a day besides, but the decision was final. Day 23, we'd be in the caves, for better or worse. 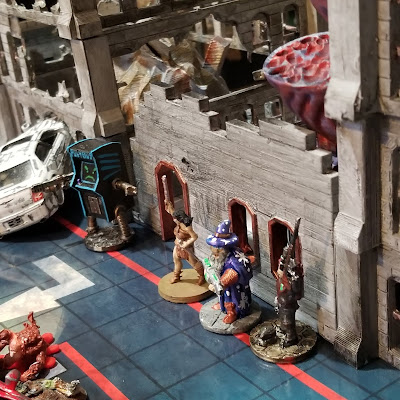 *
Polybius is MVP
All others gain +1 XP
6 AP spent on training.
3 Scrap collected from the board.
Loot: Submachine Gun
Trade: Multi-Tool, Med-Kit Smoke Grenade (1), Med-Kit
Convoy does not level up
Polybius leveled up! +1 to Combat Skill!
Kate leveled up! +1 to Toughness! +1 to Grit!
Sally leveled up! +1 to Toughness! +1 to Grit!
No new recruits this turn (Manpower Shortage):
Progress Toward finding The Hazy Caves: +1 (3 of 3)
Hazy Caves found!
Big Jimmy prepares a dose of Sprawlwort to give Daedalus an advantage in fighting fish. He then goes in search of herbs and finds a patch of Rust-Leaf Mint. He adds it to his garden, giving him a total of 7 different herbs in his garden.
Daedalus goes fishing and finds a Pretty Decent Spot with three fish he could potentially catch. Fish 1: 1/6, Fish 2: 6/4, Fish 3: 2/3. He attempts to hook Fish 1 and easily hooks it. Once he hooks it, though, he's in for a ride. Luckily, he drags it in relatively quickly and ends up with a large catch! He then goes after Fish 2 and after some protracted noodling, just before the fish can escape, Daedalus hooks it, battles it and eventually drags it in. He then goes after Fish 3, hooking it immediately, then losing it quickly as it breaks free and swims away. Still, Daedalus is pretty impressed with his catch and brings it back to show to everyone at the Convoy. A newcomer there for trading sees proof of Daedalus's wasteland fishing skill and is so impressed, he offers to join the Convoy. All in all, Daedalus gains +2 AP, earns 3 Scrap for the Convoy and manages to impress someone enough that he recruits an Ash Merchant from a pre-collapse military base (with Fishing skill +1) to the group. He does not run into trouble.
Henrietta goes in search of hogs to wrestle, but finds none. She does not run into trouble. 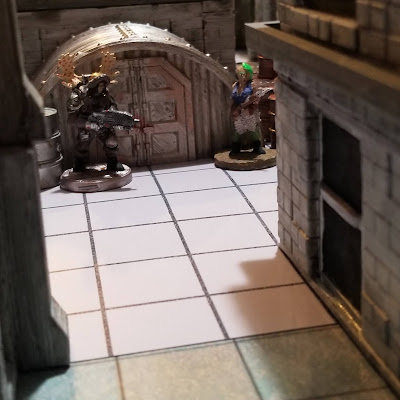 Day 22
Day 22 was pretty uneventful. One of the squad got too close to one of the fungal towers and nearly got munched when it opened and shot tentacles at us. Hostile flora is no joke. I can't imagine what is waiting for us inside if things like this are thriving out here.
*
No Battle XP
No Loot.
6 AP spent on training.
Trade (Spent 1 Scrap): Scrap Armor, Diagnoser, Stimpack, Med-Kit
Merlin leveled up! +1 to Combat Skill and +1 Grit!
Maya leveled up! +1 to Toughness and +1 Grit!
Dora leveled up! +1 to Combat Skill!
New Recruit: A Reclaimer from a pack of roaming survivors and a Settler from an isolated enclave (Fresh Recruits settlement event.)
Big Jimmy prepares a dose of Sprawlwort to give Daedalus an advantage in fighting fish. He then goes in search of herbs and finds a patch of Nuclear Chicory, but since he already has some in his garden, he returns to the convoy empty-handed. He does not run into trouble.
Daedalus goes fishing and finds a Great Spot with four fish he can try to catch. Fish 1: 2/6; Fish 2: 2/6; Fish 3: 1/1. Fish 4: 2/5; He hooks the fish relatively easily, but it breaks away. Fortunately, it stays nearby and he is able to hook it again. His rod holds and he starts to drag the fish in, but it breaks away again. His rod holds, and the fish returns, so he attempts to hook it again. He hooks it easily, and steadily drags the exhausted fish in. Score! He then goes after Fish 2, hooks it and steadily drags it in. He decides that Fish 3 isn't worth it, but Fish 4 is. He easily hooks Fish 4 and nearly drags it in, but it breaks away at the last instant. His rod holds, but the fish swims away. Grinning, Daedalus returns from fishing feeling quite triumphant and shows his catches off to the caravan. Everyone is impressed, and when he sells the fish to Greene, he contributes 4 Scrap to the community pile. He does not run into trouble. +1AP +1 Fishing Ability!
Henrietta goes in search of hogs to wrestle, and finds a single 4/4 hog. She sneaks up on it and catches it, but it bucks her off and kicks her. She is now Worn. She does not run into trouble.