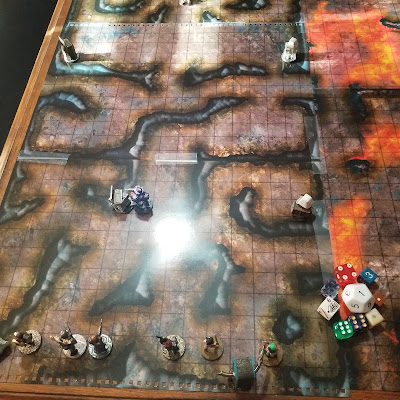 From the Journal of Maya Ceros, Day 26.

Might as well call it Maya's first rule of the wasteland. Stay in one place long enough, and once the raiders find you, they'll never stop coming. They'll get bolder and bolder until you move or until you are dead. Thankfully, we're still here. For now.

I knew something was off the moment we stepped foot into this part of the cavern complex. There were piles of stone rubble everywhere, and it all looked recent, fresh. I heard the tumble of rocks coming loose from the ceiling and knew-- our heaviest ordinance was going to be our biggest liability. 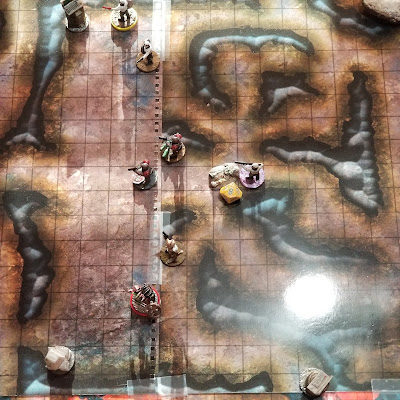 The raiders that came were tougher this time, louder, and better equipped. They rushed in, probably looking to salvage the same consoles that we had our eyes on. 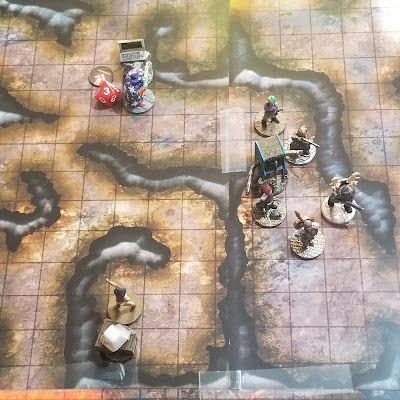 I got everyone in the tunnels, got us all staggered so we could split up if needed and move evenly the moment the first threat came. 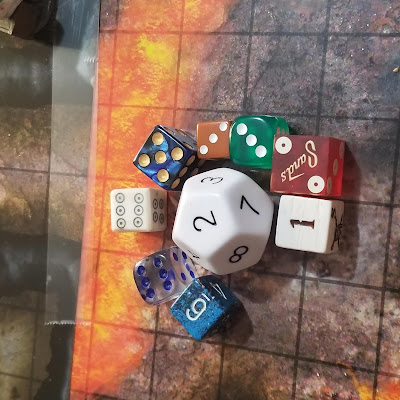 Nike and Kassandra were eager to rush in, but I held them back. Pistols would be our greatest asset with the unstable ceiling. Pistols, and I was eager to see what Polybius would do with the pair of them that he's started carrying. 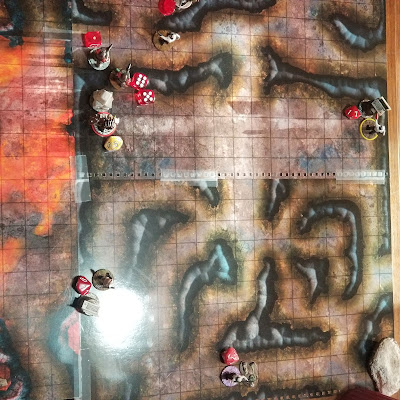 The raiders closed with the terminals in their half of the tunnels quickly, and then I saw the muzzle of a pistol as three of the crazies rushed us suddenly. 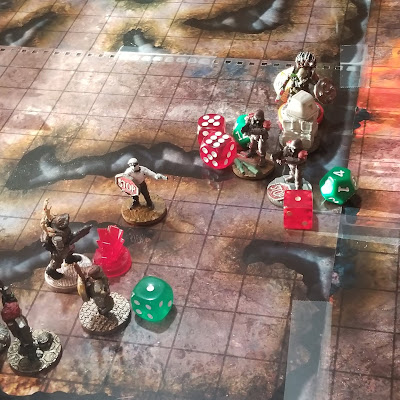 Shots rang out. I ducked back, pinned by pistol fire while one of the raiders put a few more dents in Kassandra's armor. 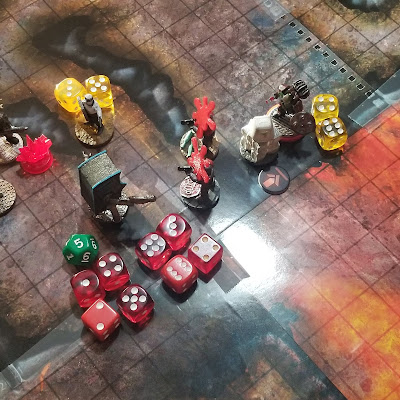 And then I saw Polybius step up with machine pistols in both hands, cutting down the two closest raiders before they could even scream. He was fast, blindingly fast, and his flurry of fire was enough to send two of the raiders running out of the cavern complex the instant they saw what they were dealing with. 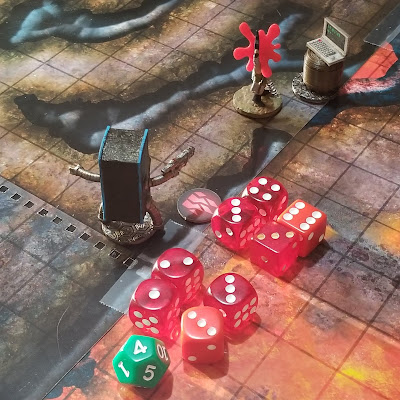 I heard the whirr of Polybius's booster implant, watched him dash out and rattle off enough lead to drop another one of the raiders. His clips ran dry immediately, but the damage was done. Five raiders running or dead in the space of seconds. 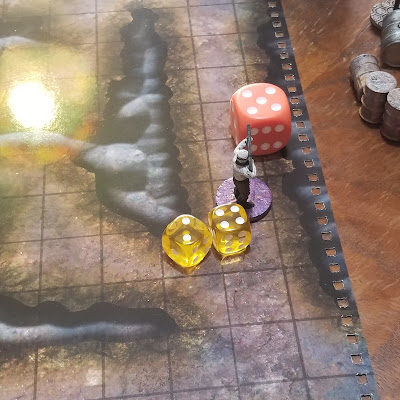 There was a terrified squeak further into the cave system. 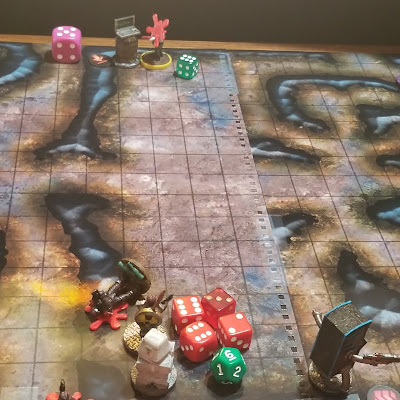 And then Kassandra let fly with her Needle Rifle, obliterating one of the raiders at extreme range. 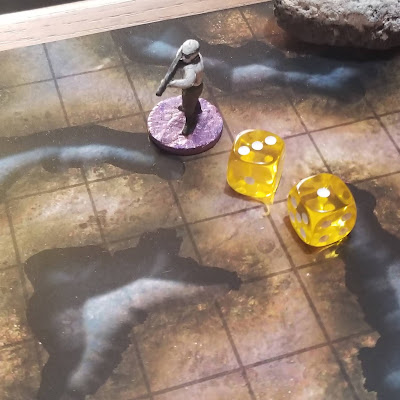 The last of the raiders bugged out then, rushing out of the skirmish area and disappearing off into a deeper darkness. 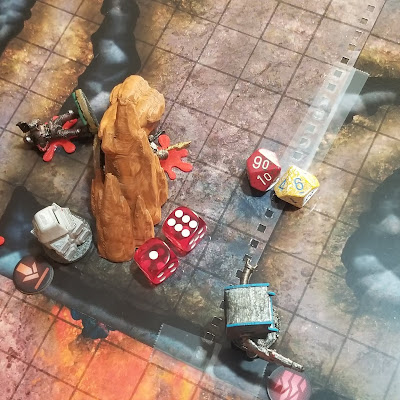 Unfortunately, the bark of Kassandra's rifle was enough to cause a cave-in that trapped her.
Fortunately, Polybius was close enough to dig her out without too much trouble. She counts herself lucky, and I absolutely believe this near-miss proves it. 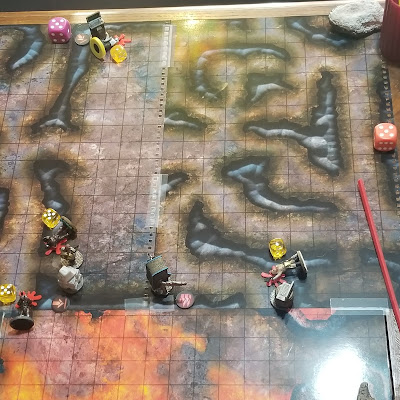 *
Polybius is MVP
All others gain +1 XP
6 AP spent on training.
+1 to Grit for Kassandra
Salvage (Loot Mod): Pistol and Machine Pistol
Loot (1): Powered Gauntlet
Special Module Loot: Auto-Fire Civilian Carbine
Trade (5): Stim-Pack, Stim-Pack, Wasteland Currency, Schematics: Well-Crafted Musket, Wasteland Currency.
Convoy does not level up
Polybius leveled up! +1 to Nerve and +1 to Grit!
Sally leveled up! +1 to Speed!
Kate leveled up! +1 to Initiative!
Maya leveled up! +1 to Initiative!
Nike leveled up! Gains Talent: "First Aid!"
Recruit: A Rookie
Progress Toward finding Factory 17: 0 (1 of 3)
Big Jimmy prepares a dose of Sprawlwort to give Daedalus an advantage in fighting fish. He then goes in search of herbs but doesn't find any. He does not run into trouble.
Daedalus goes fishing and finds a Secret Spot with four fish he can try to catch. Fish 1: 5/3; Fish 2: 5/1; Fish 3: 3/1. Fish 4: 5/3; He attempts to catch Fish 1 and he easily hooks it and brings it in. He decides to forego trying to catch Fish 2 and Fish 3, but decides to go for Fish 4. He hooks it, but it breaks away almost immediately. It then flees, leaving Daedalus to bring home only the single caught fish. It's okay, though, as Greene gives him a small pile of useful scrap for it. He does not run into trouble.
Henrietta goes in search of hogs to wrestle and finds a whole pack! Hog 1: 2/1, Hog 2: 5/4, Hog 3: 6/2, Hog 4: 1/1, Hog 5: 6/6. This pack is led by the legendary radioactive hog Big Bubbadiah! Being totally nuts, she decides to try to wrassle him, but he's so fast that she can't even catch him. Excited by the experience, she returns to camp empty-handed, but with a new story to tell. She does not run into trouble.
*

Post-Play Notes: This was a fast one. Polybius's sharp-shooter Talent with the Booster Implant, and with twin machine pistols is all kinds of ridiculous, in a good way. He has a 1/3rd chance of jamming every time he lets loose, but if you can trigger the booster and avoid the jam, he can throw a mind-boggling EIGHT DICE in a turn at anything within 6 inches. No wonder the raiders ran away.

For my settlement event, I got increased patrols (1 less enemy) and ended up facing seven raiders with one brute and one officer in a cavern with an unsafe ceiling. We did not seize initiative, but honestly, it doesn't look like we needed to.