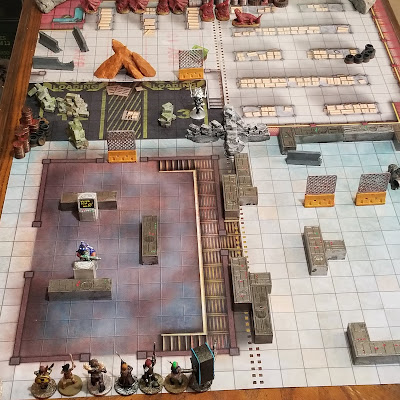 From the Journal of Maya Ceros, Day 27.

These caves-- I think some of the passages were carved out after the fall, like someone or something dug tunnels to bridge together a series of basements and bunkers. When we emerged from the natural caverns past the tech cultist bunker, we found ourselves in some kind of warehouse. A warehouse full of strangely huge and hungry lizard-things.

Greene was excited about this place, said it might have clues to another destination, another buried treasure trove of tech, something called Factory 17. For me, it was the boxes-- rows and rows of boxes, waiting to be picked over and turned out. 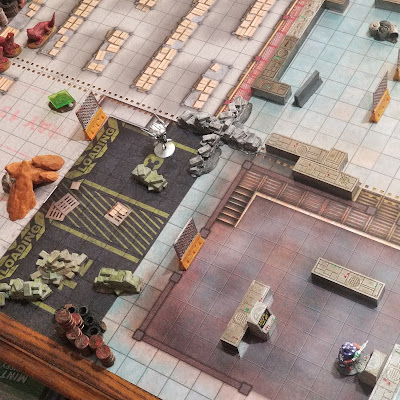 Merlin and Polybius were the first to move, our resident rifle-wizard infiltrating to the nearest console while Polybius used his talent at careful deployment to zero out the potential on a suspicious map marker. 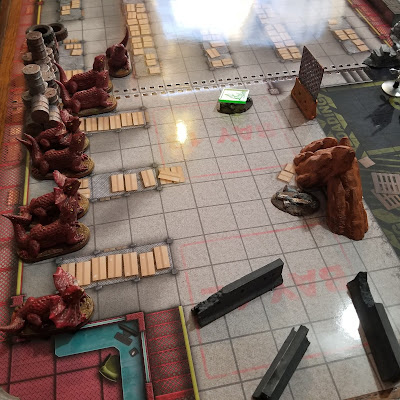 In the darkness, something stirred. A lot of somethings. Hissing, reptilian somethings. 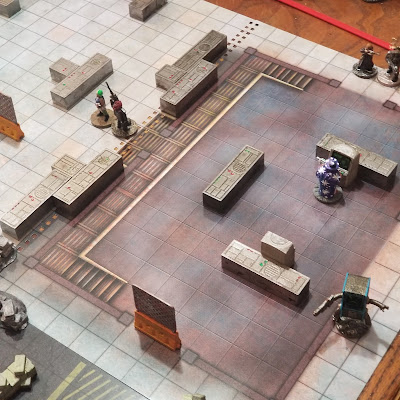 Polybius, Kate and Sally were the first to move into position. 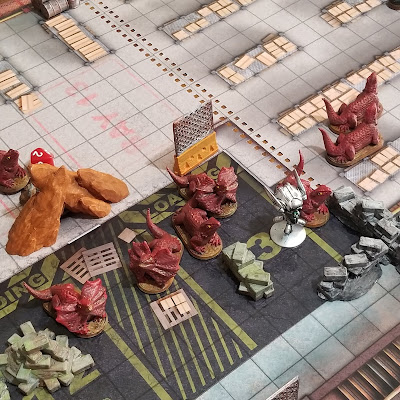 While the lizard things rushed into the debris field between us and them. 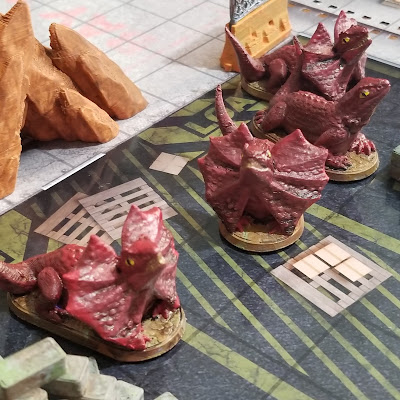 I could hear their hissing, their chittering, their hungry grumbling. 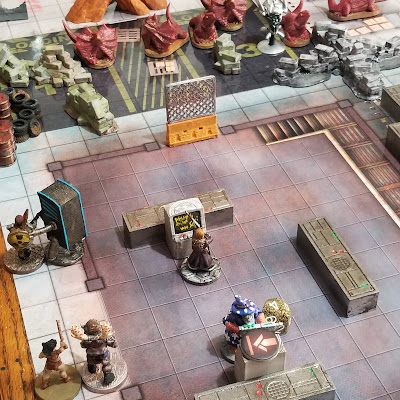 The rest of us moved into position quickly, readying our rifles. 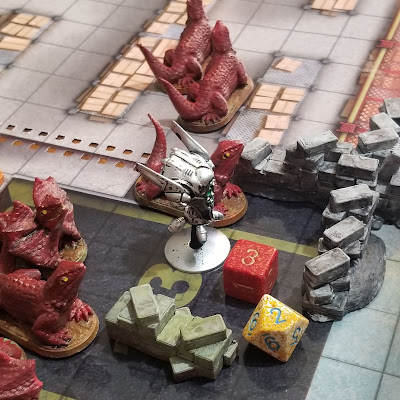 But the lizards weren't the only thing in the darkness. Something else was moving. A drone of some kind, maybe once used to stock the warehouse before the fall. 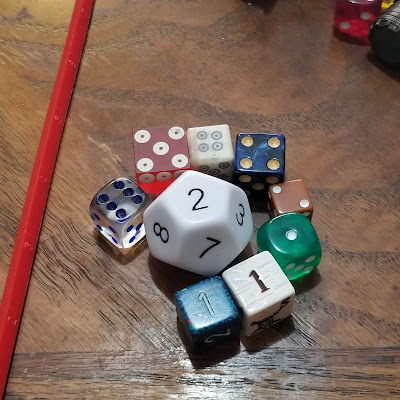 Nike, Sally and Polybius were quickest on their feet. 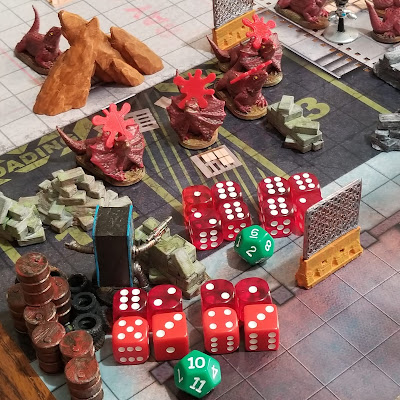 True to form, Polybius carried the team in a way that still blows my mind. Whipping out his machine pistols and winding up his booster implant, he sprayed lead until the debris-choked cargo bay was nothing but red-mist. 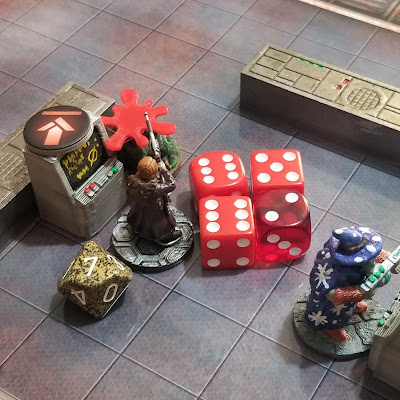 Nike tried to get data out of the console she'd already closed on, but the drive blanked itself and she found herself face to face with a vicious critter. Rounding on the thing, she let fly with her needle rifle and dropped it solidly with a single burst. 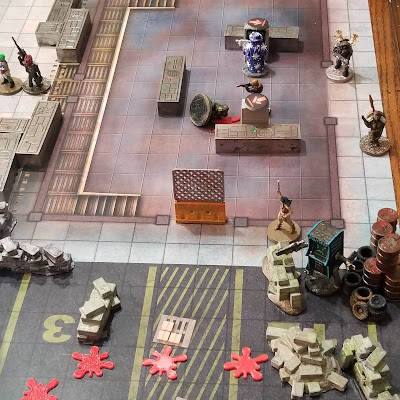 The rest of us closed with Polybius, ready to back him up against the coming onslaught. 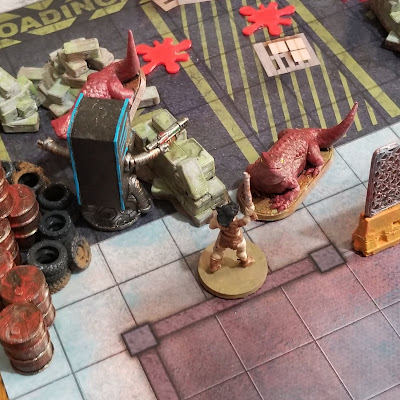 In seconds, they were on us. 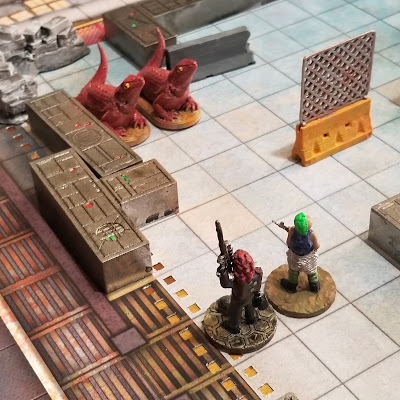 Hungry, flapping along as quickly as their meaty feet could carry them. 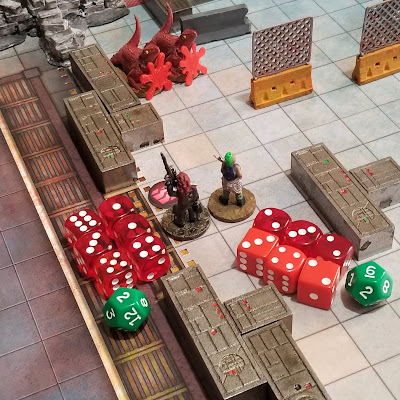 Sally and Kate were quick on the draw, unloading their heavy machineguns with enough lead to drop the massive lizards closest to them. 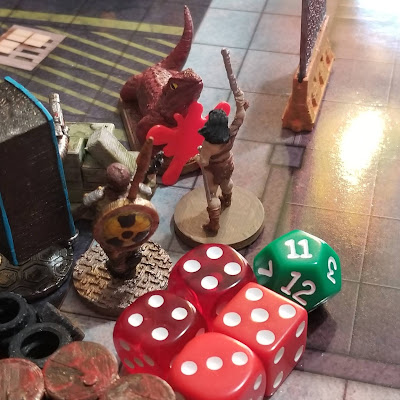 Dora took aim at the closest lizard to her, dropped it with a burst of submachinegun fire. 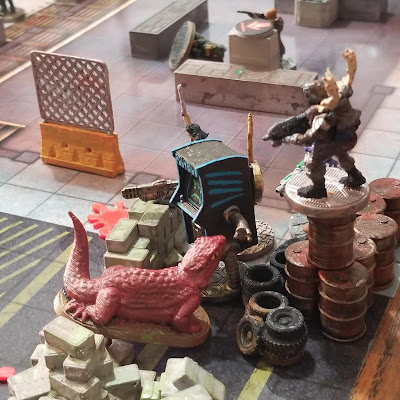 Unwilling to risk letting one of my best people get munched, I clambered over some rusty drums to get a bead on the closest of the lizards. 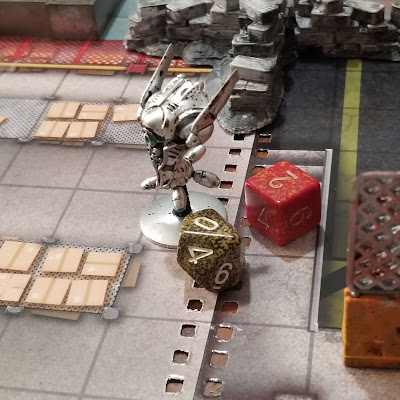 And in the darkness, the warehouse drone moved again. 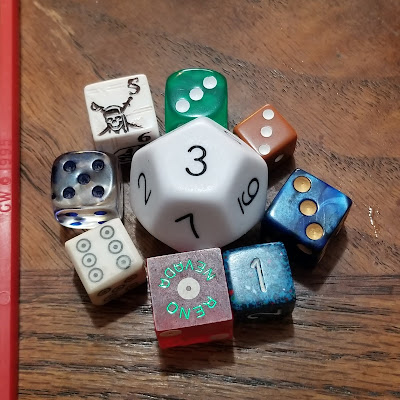 Blessedly, Polybius was quick on the draw. 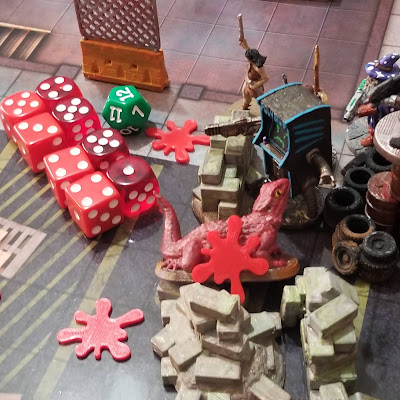 Completely unloading his pair of machine pistols may have been overkill, but it saved him and it saved us all, leaving the warehouse clear for pickings.
Later, I found out that Greene managed to pull some data out of one of the terminals that we thought had blanked itself. A new lead, a direction, and a vague idea of where to find Factory 17. 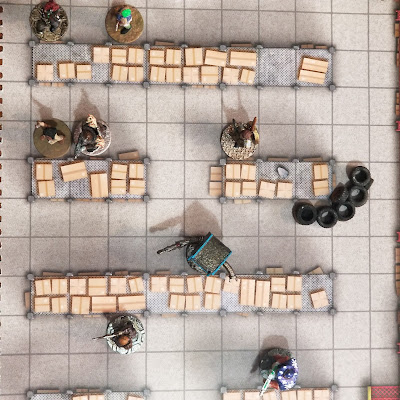 *
Polybius is MVP
All others gain +1 XP
4 AP spent on training.
Loot (2): Hot Pack and Filtration Implant
Special Module Loot: Enhanced Field Armor
Trade (3 + 1 from Scrap): Field Armor, Fine Quality Hand Cannon, Scrap Armor, Scanner.
Convoy does not level up
Kassandra leveled up! Gains talent: "Treasure Hunter!"
Merlin leveled up! Gains talent: "Fortunate!"
Recruit: A Caravan Guard From A Trading Post
Progress Toward finding Factory 17: 1 (2 of 3)
Big Jimmy prepares a dose of Sprawlwort to give Daedalus an advantage in fighting fish. He then goes in search of herbs and finds a big patch with three herbs in it. Abbot's Thyme, Ditch Tobacco and Clary Sage. Two of these are new, bringing his herb garden to a total of 12 useful plants. He does not run into trouble.
Daedalus goes fishing and finds a Pretty Decent Spot with three fish he can try to catch. Fish 1: 1/6; Fish 2: 4/4; Fish 3: 2/4. He attempts to catch Fish 1 and he easily hooks it and brings it in after three good succesful pulls on the rod. It's a big one! He then goes for Fish 2, which is so wily it almost gets away for being too cunning. He starts to drag it in, but halfway to the shore the line snaps and the fish gets away for good. Frustrated, but still willing to keep trying, Daedalus goes after Fish 3, hooking it easily and drawing it in to shore. With 10 Strength worth of fish caught this run, he is able to trade his catches in to Greene for a nice pile of three scrap.
Henrietta goes in search of hogs to wrestle, but doesn't find any. She does not run into trouble.
*