Day 28: Gone Too Deep and Too Greedily (Five Klicks) 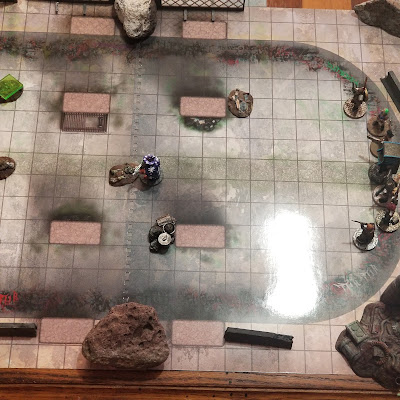 From the Journal of Maya Ceros, Day 28.

The last area of the Hazy Caves was huge and bowl-like. A massive run-off canal or sewer or something where water from all the upper cavern areas would collect and run off into some unknowable darkness. We had flashlights, but the air was so thick with spores and haze that we couldn't see more than about six meters into the soup. There were bodies everywhere, bodies gripping glinting objects that might be valuable, and so we spread out, searching the area for anything useful.

And that's when they came. Horrors. Horrors unlike anything I could ever have imagined possible. 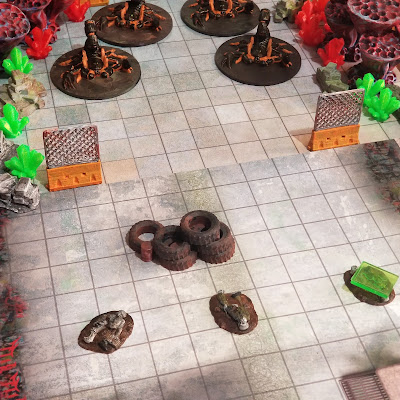 At a distance, all I could see was black, was the glitter of light off chitinous skeletons. They were huge, chittering and hissing in the thick fungal morass. 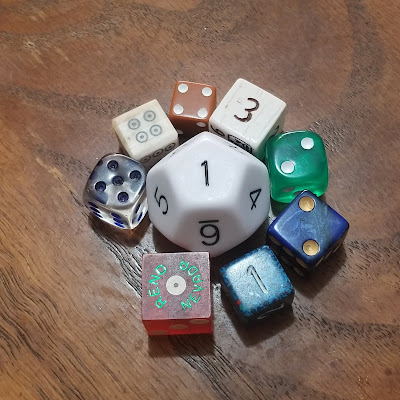 I remember being terrified. I remember feeling like coming here to these dark depths was the worst choice I'd ever made in my short life. I could see the same fear in Kate and Dora's eyes. 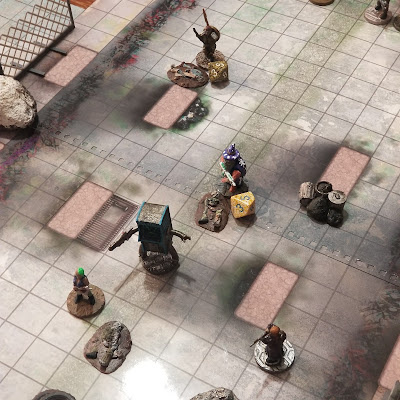 But true to form, Polybius, Kassandra, Merlin and Nike showed no fear, instead rushing in to meet the enemy head-first. 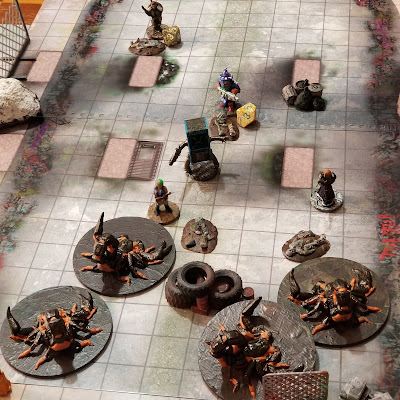 And that's when the horrors came. Massive, terrifying, their arching tails dripping with viscous poison. Claws raised and open, they converged on us, closing ranks with Sally almost immediately. 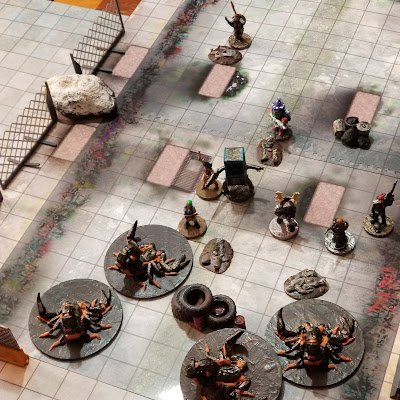 Terrified, the rest of us rushed forward, into the jaws of death. 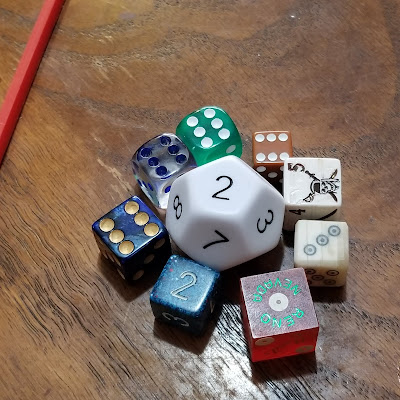 Polybius, Kassandra and I were the first to take the fight to the horrors. Everyone else seemed shocked to their core at the sight of the things. 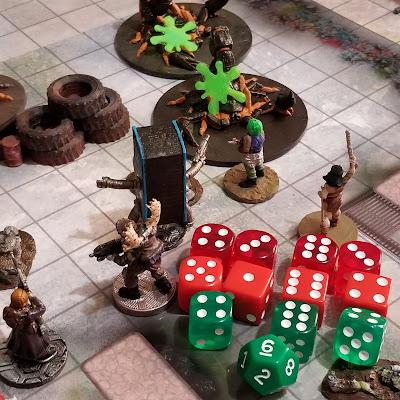 I heard Polybius's machine pistols chatter and bark, and in seconds two of the horrors went down. 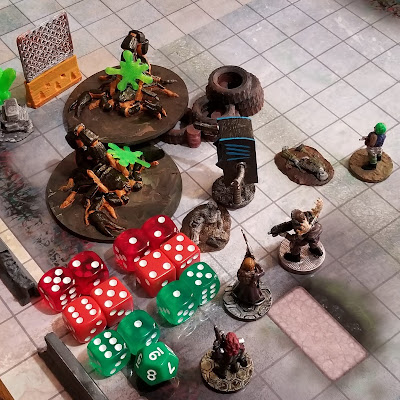 With a the whirr of his Booster Implant coming online, he then turned and cut down the other two in the space of a breath. 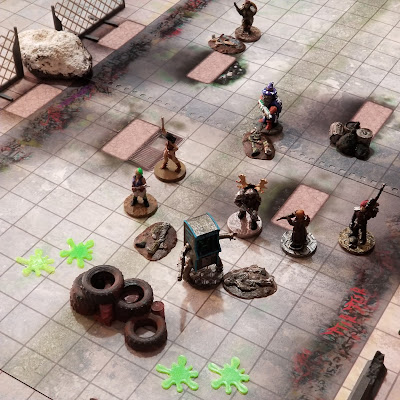 I was in awe. How could I not be? Before anyone else'd had time to react, Polybius had reduced the most terrifying threat we'd ever faced to little more than piles of goo on the floor. The only shots fired had been his, and they had been devastating.
In the darkness, more horrors chittered. Hordes upon hordes. Instead of sticking around to face them, I gestured quickly and directed everyone to the exit. There's nothing left in these hazy caves that would make it worthwhile to stick around any longer.
*
Polybius is MVP
All others gain +1 XP
4 AP spent on training.
Loot (2): Pistol, Burner Ammo
Special Module Loot: Laser-Sighted Hand Cannon
Trade (3 +2 from Scrap): Battle Plate, Water Tablets, Nomad Armor, Smoke Grenades, Shotgun.
Back home, traded Water Tablets for +3 Loot Rolls and got:
Hunting Rifle, Scrap Cannon, Scrap Rifle
Convoy does not level up
Dora leveled up! +1 to Initiative!
Polybius leveled up! +1 to Speed!
Sally leveled up! Gains Talent: "Fearsome"!
Recruit: Ash Merchant From a Pre-Collapse Military Base
Progress Toward finding Factory 17: 0 (2 of 3)
Polybius receives a Filtration Implant, and is out of play for Day 29.
Big Jimmy prepares a dose of Sprawlwort to give Daedalus an advantage in fighting fish. He then goes in search of herbs and finds only one useful one, catnip, which he adds to his garden. He does not run into trouble.
Daedalus goes fishing and finds a Pretty Decent Spot with three fish he can try to catch. Fish 1: 3/1; Fish 2: 3/1; Fish 3: 1/2. Daedalus watches the fish with his careful, discerning eye and decides that none of these fish is worth the effort to try to catch. Instead, he turns back for home. He'll be needed to work on Polybius come the morning anyway. He does not run into trouble.
Henrietta goes in search of hogs to wrestle and finds a whole pack! Hog 1: 1/3, Hog 2: 2/3, Hog 3: 5/4, Hog 4: 5/2, Hog 5: 3/4. Eager to catch a hog, she selects Hog 2 and goes in fast. She catches him, then proceeds to wrestle. Working fast, she tries to hog tie him and nearly does, but he gets away. She's getting better, but the hog still kicks her in the head, making her Worn. She does not run into trouble.
*

I have to admit, this was the encounter I was dreading most. Rad-Scorpions are strong, armored and have a hard-hitting ability. Add Impenetrable Gloom to that (it being the only "unusual thing" left in the chart) and suddenly you can't plink these guys at range. You've gotta get right up, toe-to-toe with them. I thought for sure we were going to get massacred.

Then Polybius does what Polybius does best. He gets enough lucky rolls to one-shot all four in the same turn and absolutely carries the team yet again. It'll be interesting to see how the team does next turn when I bench him to install the Filtration Implant.