Day 29: At The Edge of Everywhere 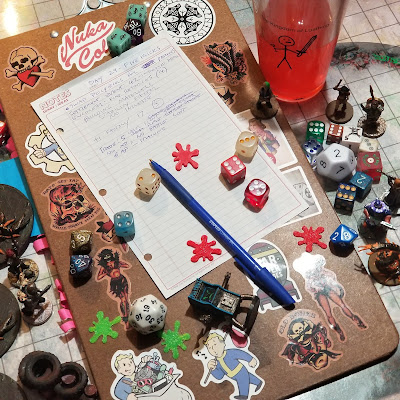 From the Journal of Maya Ceros, Day 29.

As soon as we linked up with the Convoy again, we were off in search of Factory 17. Greene had a hunch, a scrap of a map and some coordinates to point us in the right direction. With some luck, I figured, we'd reach it before nightfall.

For better or worse, we did.

In truth, the day was pretty uneventful. We bumped along on rutted roads, keeping a vigilant eye out for any sign of the factory or anything else of note. About halfway through the day, we found the remains of another convoy, another group that had struck out this far, though they hadn't been so lucky as we have been. There were enough scraps and building supplies left that we could have probably reinforced everything we have if we'd found it earlier in our journey. In the end, though, there was almost nothing of value to anyone but Greene. I'm just glad he was willing to pay us in trade for everything we pulled out of the wreckage for him.

I guess I'll know what it is soon enough. We go in tomorrow, scope the place out and see what's what. With a little luck, it'll be abandoned, full of tech, with nothing haunting the hallways but canned goods and ammunition.

Well, one can hope, at least.

*
No MVP
No battle XP.
6 AP spent on training.
No battle loot.
Trade (5): Beam Rifle, Laser Sight, Cloud Grenades, Camo Cloak, Civilian Carbine.
Convoy does not level up
Maya leveled up! Gains talent "Nimble"!
Kate leveled up! Gains talent "Dirty Fighting"!
Recruit: Rookie
Progress Toward finding Factory 17: 1 (3 of 3)
FACTORY 17 FOUND!
Polybius is fully healed and returns to the team.
Big Jimmy prepares a dose of Sprawlwort to give Daedalus an advantage in fighting fish. He then goes in search of herbs but doesn't find any. He does not run into trouble.
Daedalus goes fishing and finds a "Not Great" Spot with two fish he can try to catch. Fish 1: 1/1; Fish 2: 3/2. Daedalus watches the fish with his careful, discerning eye and decides that none of these fish is worth the effort to try to catch. Instead, he turns back for home. Polybius still needs some care if he's going to be ready to be a whirlwind force for the initial foray into Factory 17 tomorrow. He does not run into trouble.
Henrietta goes in search of hogs to wrestle and finds a whole pack! Hog 1: 1/3, Hog 2: 2/5, Hog 3: 2/3, Hog 4: 6/3, Hog 5: 5/1. Eager to catch a hog, she selects Hog 5 and goes in fast. She tries to catch him, but he's too fast and the whole pack gets away. She does not run into trouble.
*