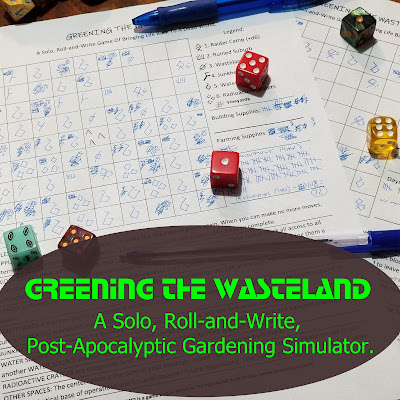 So here I am, playing all these amazing solo games, and because I am a creative type, I get a lot of cool ideas while I play that I just have to write down. One of those ideas became this game, Greening The Wasteland. 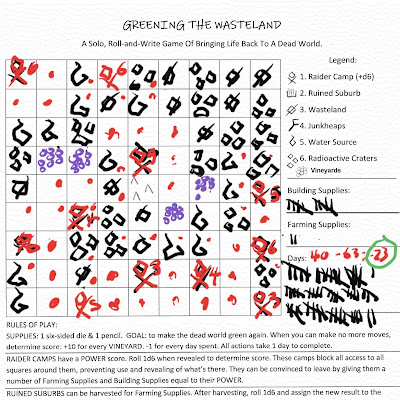 Greening The Wasteland is a solo, roll-and-write game with all the rules and play area condensed into one sheet. It's pretty smooth (I'm not into crunch) but there's an optional set of deluxe rules that make the game more crunchy and give it more replay value that I've made to go along with it as well.
These pictures are the play results of my own final tests of the system, after I worked out all the bugs. The basic premise is that you get to explore the post-apocalyptic wilderness, scavenge supplies, plant vineyards and feed raiders until you can convince them to leave and raid somewhere else. You can also plant other crops with the deluxe version, and hire vigilantes to drive off the raiders, etc. 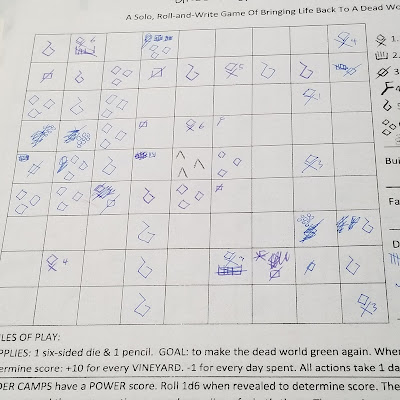 So far, I've played the game mostly with pen and paper, but I've also played a few games on my phone as well, using the stylus to mark up the board with the symbols that denote what is found in the wasteland.
The standard, one-page edition is pay-what-you-want (so, basically free,) but the deluxe edition brings a ton of extra optional rules to bear that you can drop into your game as you see fit.
Standard Edition: Itch.io
Deluxe Edition: Itch.io
Post your high score in the comments! 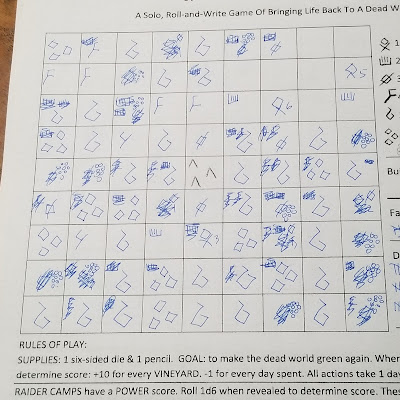