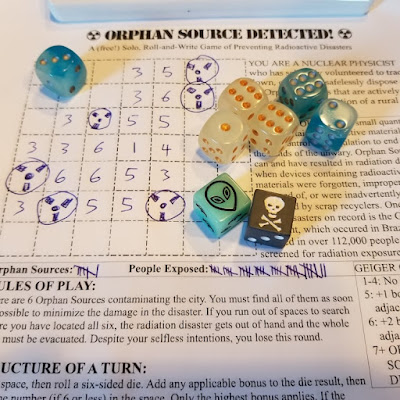 YOU ARE A NUCLEAR PHYSICIST who has selflessly volunteered to track down, gather and dispose of six Orphan Sources that are actively poisoning the population of a rural community.
ORPHAN SOURCES are small quantities of self-contained radioactive material that escape control and regulation to end up in the hands of the unwary. Orphan Sources can and have resulted in radiation disasters when devices containing radioactive materials were forgotten, improperly disposed of, or were inadvertently processed by scrap recyclers. One of the worst disasters on record is the Goiânia Accident, which occurred in Brazil, and resulted in over 112,000 people being screened for radiation exposure.
This (technically free, but donations are appreciated) solo, one page, roll-and-write game has everything you need (except a pen or pencil and a die to roll) to play the game. The rules, the play area, the optional game modes- everything is on one page. Help spread the word about Orphan Source related disasters, and post your score in the comments!
Get your copy here.
- - -
Labels: Ellie Valkyrie