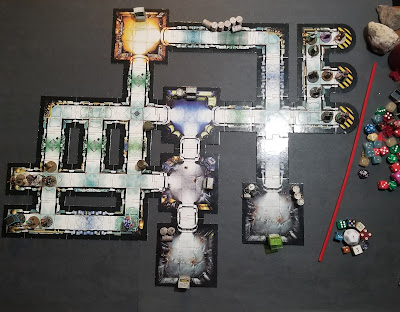 From the Journal of Maya Ceros, Day 32.

I've discovered that each of the five labs of Factory 17 (Alpha, Beta, Gamma, Delta and Epsilon) is like a self-contained module, all built along the same pattern, but each with its own quirks. Alpha looked like it had never been breached, while Beta had clear signs of entry. I heard the shouting and crazy laughter the instant we blew open the doors and made to move inside. 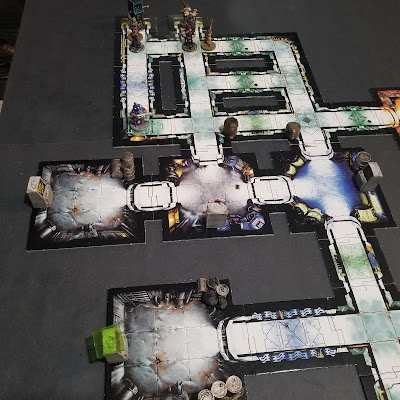 Merlin was the first inside, as is his way, and Kassandra was able to access the power grid just inside to mess with the lights and probably some of the computer systems as well. 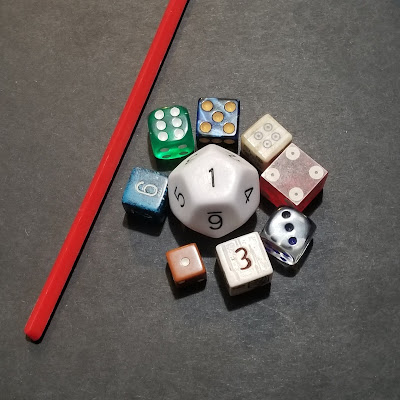 Dora, Nike and Kate were quick on their feet. 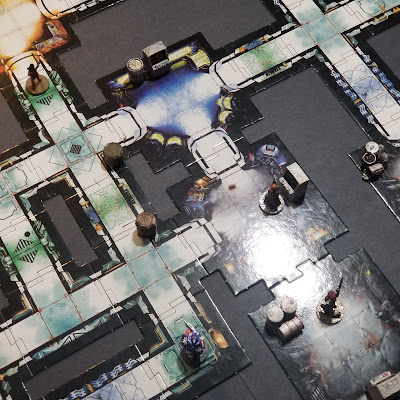 Before the occupants of Beta Labs could even come out to meet us, we had staked out all of the consoles that might hold useful information. 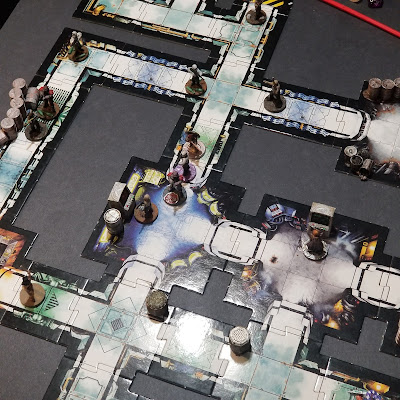 But they didn't wait long. In seconds, they were among us. 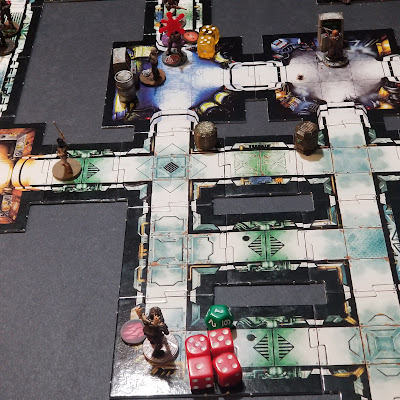 But I was ready for them. I made the first kill, and scared off the scavenger behind him. 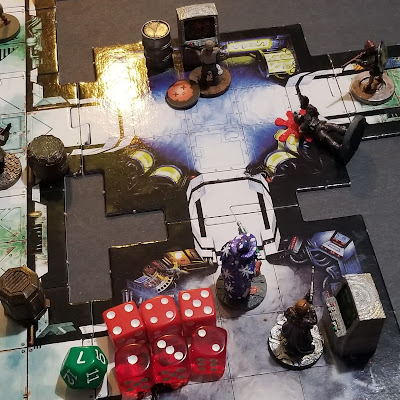 One of the Scavengers rushed to a console, presumably to lock it down or call in reinforcements. Merlin tried to catch the wastelander from behind with his heavy machine gun, but the rounds did little more than wound the bandit. 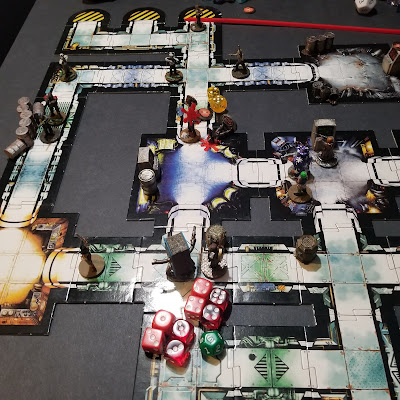 Yelping like a terrified dog, the wastelander ran for cover, only to get hosed down with lead by Polybius. 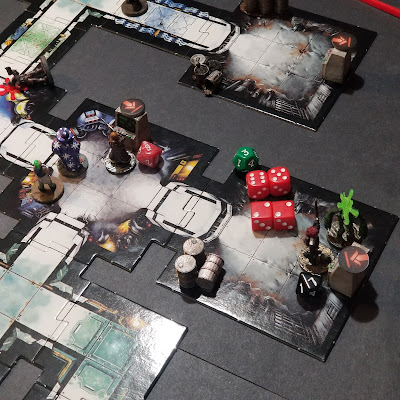 Kate frantically tried to log-in to the computer she'd been homing in on, but the thing blipped and a horrifying amalgam of flesh and insect rose out of the shadows to confront her. Luckily, she was able to turn her gun on the horror and obliterate it before it could reach her. 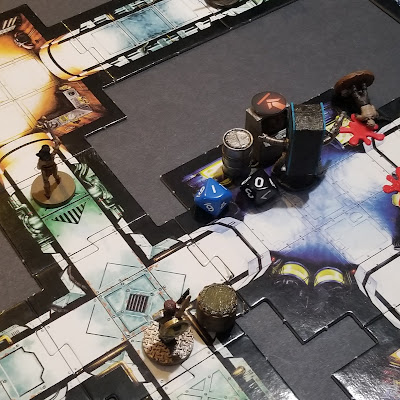 Polybius homed in on the nearest console and quickly interfaced with it. His first try was a bust, but Dora's "Sense of Adventure" inspired him to try again. Luck was with him! The console revealed the location of a suit of truly impressive combat armor. 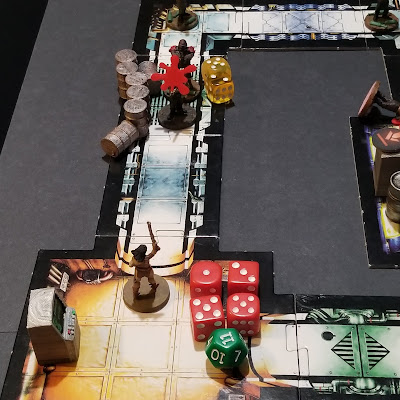 Dora went on to splatter one of the ruffians. 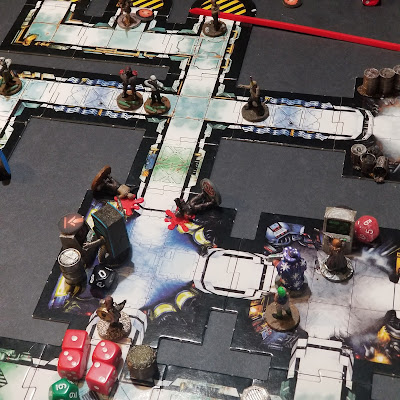 Kassandra sprinted up and tried to catch one of the scavengers at extreme range, but the shots all missed. 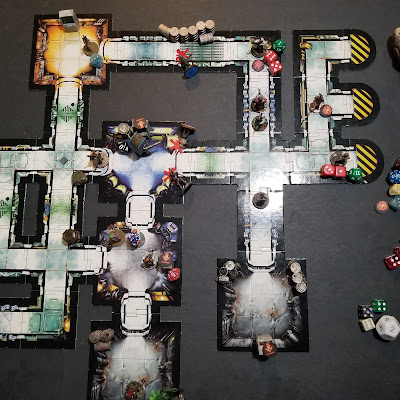 Pulling back, the scavengers all tried to hide further inside the labs. A few took shots, but none of those shots found their intended marks. 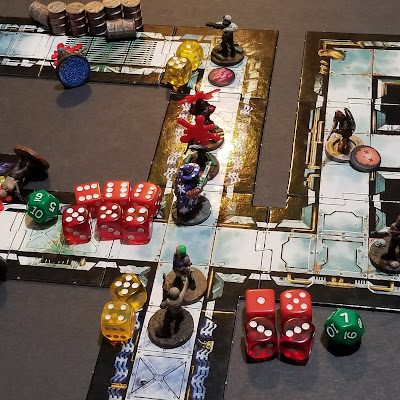 With the scavengers pulling back, combat was about to turn into a waiting game, and Merlin and Sally were having none of that. Rushing in, they slew two of the raiders and drove away a third in a single lightning strike. 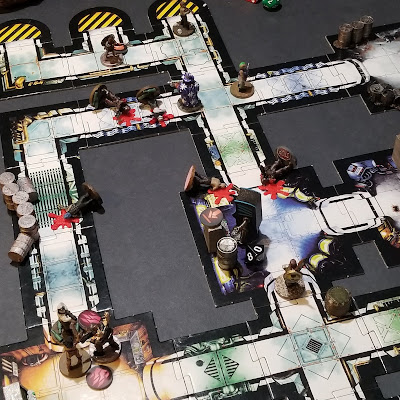 Mad with fear, one of the bandits ran away from the carnage and went sprinting right at Dora and I. 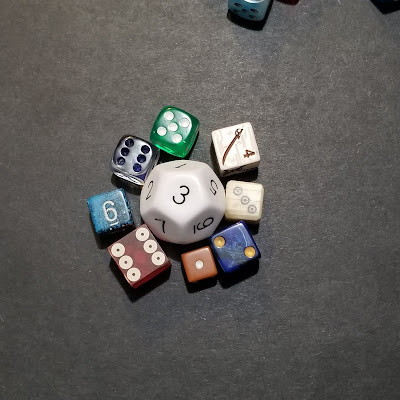 I felt like I was burning alive, like I could just push and yell and gnash my teeth and drive my squad right over the scavengers. I knew it was the injection making me crazy, but maybe the worst part was not so much the rage-- it was the fact that I liked it. 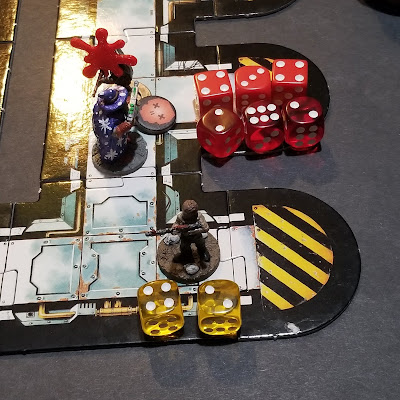 Meanwhile, Merlin was calmly and patiently doing all the hard work. 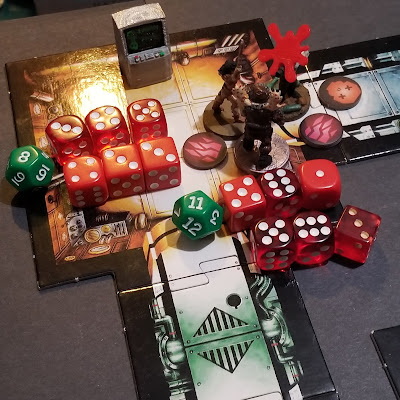 Well, maybe not ALL of the hard work. 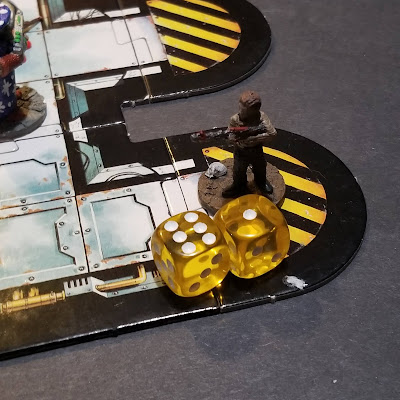 Huddling against an elevator door, the last of the bandits still stuck with us. 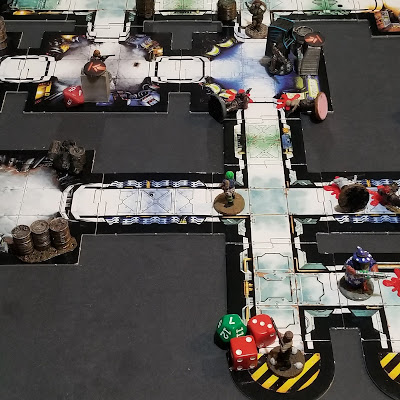 He took a shot at Kassandra, but the shot went wide. 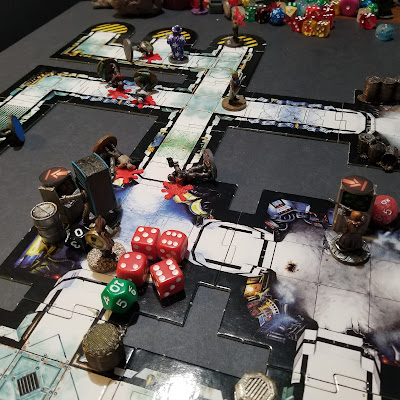 Kassandra's shot, on the other hand, was graceful, practiced, and true. 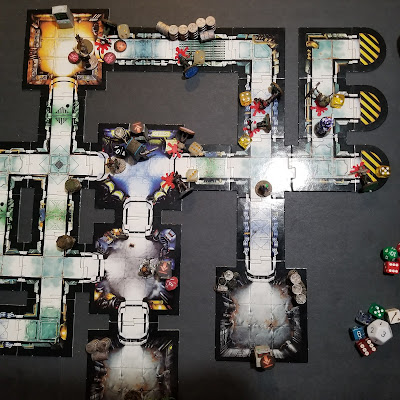 Clean-up of Beta Labs was slow and methodical. I excused myself almost the instant it was declared secure and went for a run to try to get some of the rage out of my system. When I came back, Greene was practically leaping up and down with excitement.
"I've found it!" he said. "Area Sigma IV! I've found it! I know where it is!"
I couldn't help but grin a little at the news. Sure, we still have half of Factory 17 to clear out, but our next stop after that is going to be a government base full of god-only-knows what kind of tech.
*
Merlin is MVP (+1xp)
All others gain +1xp
6 AP spent on training.
*
Loot (1 + 1 Found): Battle Plate, Fine Quality Pistol.
Salvage (per Loot Mod): None
Special Module Loot: Industrial Generator
Trade (5 + 1 From Scrap): Frag Grenade (1), Sharp-Shooter's Rifle, Hunting Rifle, Wasteland Currency, Hafted Weapon, Scout Armor.
Convoy does not level up
Maya leveled up! +1 to Speed!
Merlin leveled up! +1 to Speed!
Sally leveled up! +1 to Initiative!
Recruit: A Rookie
Progress Toward finding Area Sigma IV: 1 (3 of 3)
AREA SIGMA IV FOUND!
*
Big Jimmy prepares a dose of Sprawlwort to give Daedalus an advantage in fighting fish. He then goes in search of herbs and finds a big patch of three herbs (Rust-Leaf Mint, Asafetida and Blistering Nettle.) Only the Blistering Nettle is new to him, so he collects it and adds it to his garden. He does not run into trouble.
Daedalus goes fishing and finds a Great Spot with four fish he can try to catch. Fish 1: 3/5; Fish 2: 3/4; Fish 3: 2/2; Fish 4: 2/5; He decides to go after Fish 1 and hooks it. He starts to drag it in, but it breaks away and does not return. He then goes for Fish 2, and after a protracted battle, drags it in. Going for Fish 3, he noodles a bit before he finally hooks it. It breaks away almost immediately, but returns for the hook again, getting wilier and wilier until it becomes uncatchable (I can't believe I rolled five 1's!) He then goes for Fish 4, hooks it immediately, then battles it until it breaks away and escapes. Trading his catch to Greene, Daedalus shares 1 Scrap with the rest of the Convoy. He does not run into trouble.
Henrietta goes in search of hogs to wrestle and finds none. She does not run into trouble.
*
Post-Play Notes:  Campaign Turn 32- Factory 17, 10 Renegade Scavengers. No Leadership. Settlement Event: Materials Shortage. Unusual: Disturbing Shadows.