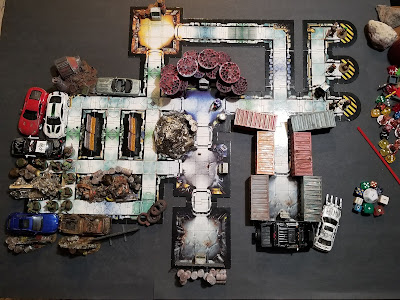 From the Journal of Maya Ceros, Day 35.

Last of the labs in Factory 17. We've pulled some good stuff out of the other labs, faced things I hope I never have to face again, and we've found the coordinates of Area Sigma IV. Tomorrow, we'll be at the gates of a government facility from before the fall. Tomorrow, we might be in the middle of ground zero, the place where all of this started.

Epsilon labs had a smell, seemed to radiate with a stink that tortured the nose even yards from the building. Sour sweat, musk and animal droppings. I knew going in that whatever the lab once had been, now, well, it wasn't so much a lab as a nest. 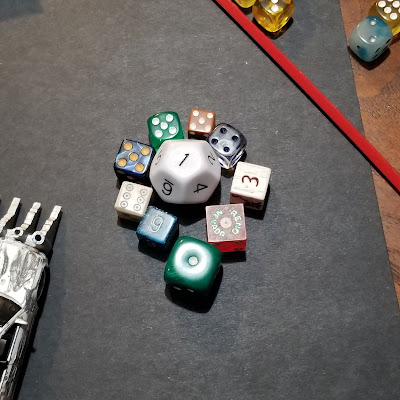 Kassandra was quickest on the draw, coming up close behind Merlin and he made a bee-line for the center of the facility. 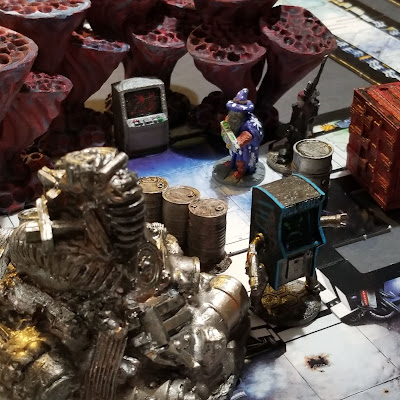 The place was a wreck, crammed to the ceiling with collected junk glued together with fungus and feces. A central terminal surrounded by shattered tanks that looked as if they had been burst by the fungal columns now towering out of them blinked at us with ominous red letters.
!!! CONTAINMENT BREACH !!! 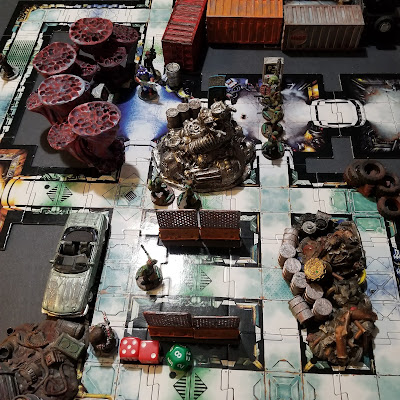 The warning was old, from before the fall.
And then the horrors came, half-fungal but confident, competent. 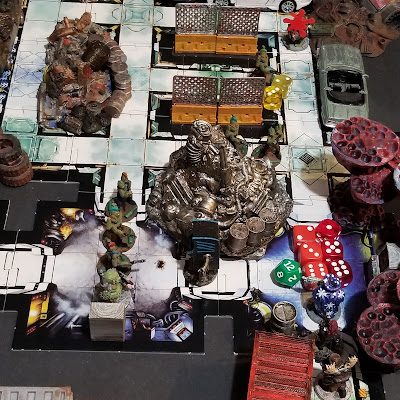 Merlin was the first to fire, obliterating one of the slimy green mutants with a volley of heavy machinegun fire. 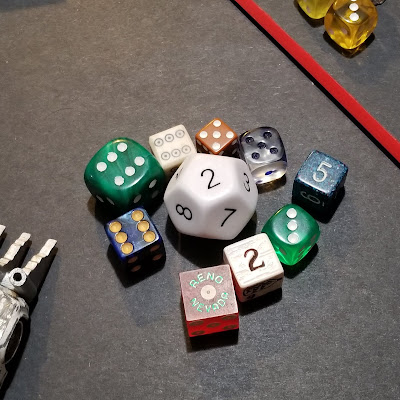 Kassandra, Nike and Sally were quickest on their feet as we engaged the mutants head-on. 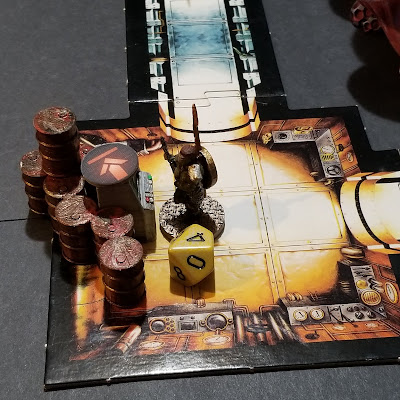 Rushing in, Kassandra hammered the keys of the nearest console, but pulled up nothing but code jibberish. 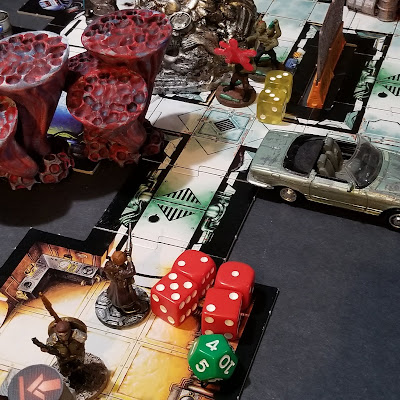 Nike leveled her needle rifle at the closest of the mutants and dropped him. The mutant that had been hot on his heels stopped, seeing Nike, then turned and ran off, screaming as he disappeared beyond the walls of the factory and into the wasteland. 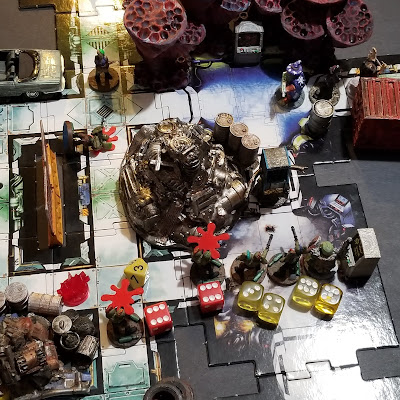 I heard Sally shout, marveled at the arc of her throw as she planted a grenade right between two of the mutants. The explosion was magnificent, blasting enough mutant chunks through the corridors to terrify and scare off two more of the freaks. 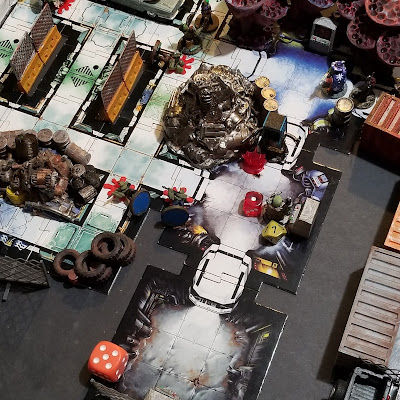 The last of the mutants in the main pack shouted and sprayed a wild volley of lead at Polybius as he tapped fingers against the closest console, opening a door somewhere further in. I never thought I'd see the big hulk hesitate, but the spray had been wild enough to make Polybius falter. 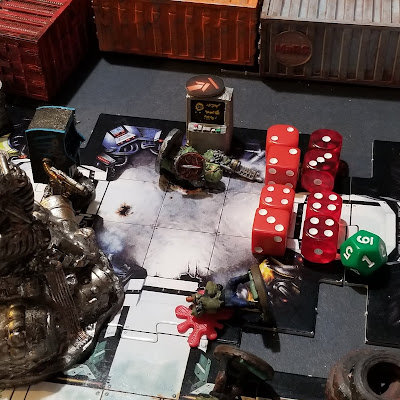 Not that he faltered for long. His twin machine pistols barked and tore into the mutant, knocking him to the ground. 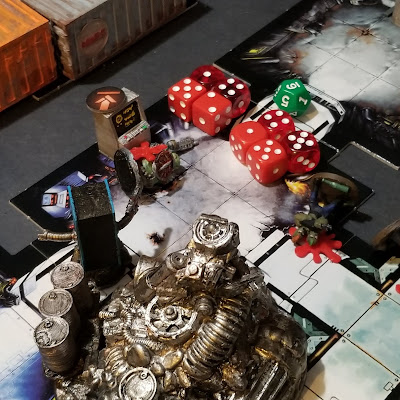 When it was clear the mutant was still alive, Polybius fired up his Booster Implant and gave the little bugger another spray of hot lead to put him down for good. 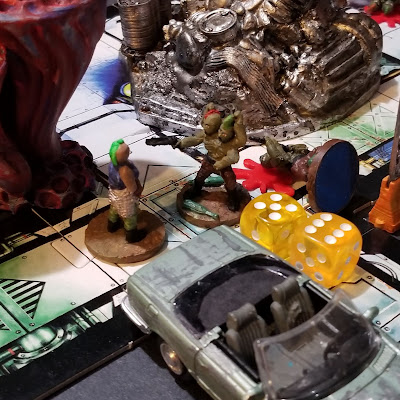 Hearing the booster and the sound of machine pistols utterly annihilating one of their number, the last mutant turned and fled then, disappearing into the wasteland. 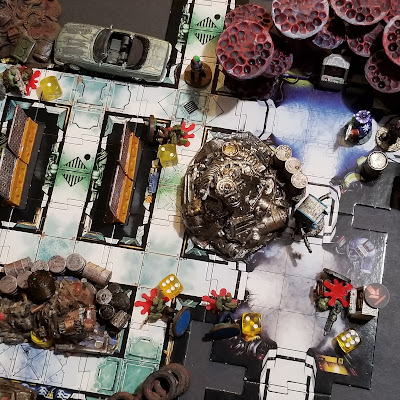 Once we secured the last lab of Factory 17 and picked through the place, we managed to find a scrap rifle on one of the mutants that was halfway decent. The consoles were less yielding to our poking and prodding, but Greene managed to pull enough data out of one of them to realize that this is where it all started. This lab was ground zero, where the first of the fungal horrors blossomed and escaped, heralding the terror, the wars, the collapse and the mass fire-bombings that came with the end of the world as it was. This place had been a mass breeding ground for every experimental bioweapon and supersoldier that had come out of the research at Sigma IV.
Only here, they had gotten out. Here, the horrors had gotten free.
God only knows what kind of horrors they were brewing up at Sigma IV.
God, and well, probably us too, soon.
*
Sally is MVP (+1xp)
All others gain +1xp
6 AP spent on training.
*
Loot (1 + 1 for mundane roll): Stimpack, Preserver Pack.
Salvage (per Loot Mod): Scrap Rifle
Special Module Loot: Industrial Protective Gear
Trade (5): Bipod, Bipod, Military Armor, Needle Rifle, Civilian Carbine.
Convoy does not level up
Merlin leveled up! Gains Talent "Tough As Scrap!"
Recruit: Rookie
*
Big Jimmy prepares a dose of Sprawlwort to give Daedalus an advantage in fighting fish. He then goes in search of herbs but doesn't find any. He does not run into trouble.
*
Daedalus goes fishing, but doesn't have any luck at all. He does not run into trouble.
*
Henrietta goes in search of hogs to wrestle and finds a pair. Hog 1: 3/2; Hog 2: 1/6. She goes after Hog 1 and catches it, but it gets away when she goes to hog tie it. She does not run into trouble.
*
Post-Play Notes:  Campaign Turn 35- Factory 17, 9 Class Three Mutants. No Leadership. Settlement Event: Manpower Shortage (No effect due to Purifier). Unusual: Crumbling Walls.