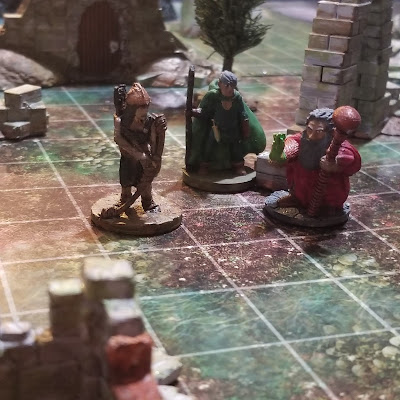 From the Journal of Sigrún Þórsdóttir, Second Skirmish.

In the tavern, people talk, and when people talk to us, they talk about things that stalk the villagers in the darkness.

We were following a lead when Fitztandalus found the tracks. They were deep, new, and decidedly humanoid. Following them led us to a trap-- a simple rope-snare trap that caught Fallah. When the Outlaw who had laid the trap emerged triumphantly from the trees, only to be confronted with the sight of us cutting Fallah out of the trap, all ideas of plunder immediately left her eyes.

In the end, she was cordial enough. Barbulax was able to soften her up with talk and camaraderie, enough so that she ended up giving us a few things. I can tell that she empathizes with our cause, and though she was not persuaded to join us for a life of thrilling heroics, she was willing to trade with us, offering us a few fine enchanted goods and taking almost nothing in compensation.