It may be surprising, that as someone who writes as much as I do, and as someone who has written a lot of writing prompts before, I'm not generally into journaling games. I tend to have more ideas than I can put to paper as it is, and games that lean heavy into prompting creativity can actually seem a bit boring to me. Give me a mindless, die-rolling dungeon crawler any day (for better or worse) and that'll get my blood pumping!

What grabbed me about Princess with a Cursed Sword though is that the game has certain mechanics to it which make it intriguing. On my first playthrough, I took one liberty (using the Tarot deck to determine my answers to the first four questions) and I feel like that really helped point me in the right direction. It gave the game a seeming randomness, but also an opportunity for the Tarot cards to really shine.

Now, I've been reading Tarot cards (and have used them for guidance) for my whole life. Tarot card divination practice actually goes back in my family at least four generations (maybe further, I don't know) but using them to play a game is a totally new concept for me. I found it refreshing, and unsurprisingly, actually a little illuminating as well. As you progress through the game, the cards become prompts, and the prompts guide you to explore "the ruins" that are central to the story you will build while playing this game. Who is this princess? What is the curse of the sword? Only you can decide that, but the cards are there to inspire you to find the story inside yourself.

My first playthrough (I'm sure there will be others in the future) follows below. 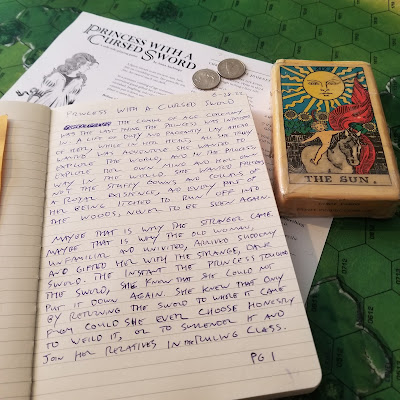 The coming of age ceremony was the last thing the princess was interested in. A life of duty and pageantry lay ahead of her, while in her heart, all she truly wanted was adventure. She wanted to explore the world, and in the process, explore her own mind and find her own way. She wanted freedom, not the stuffy gowns and collars of a royal existence, and every part of her being itched to run off into the woods, never to be seen again.
Maybe that's why the stranger came. Maybe that's why the old woman, unfamiliar and uninvited, arrived suddenly and gifted the princess with a strange, dark sword. The instant the princess touched the sword, she knew that she could not put it down again. She knew that only by returning the sword to where it came from could she ever choose honestly to wield it, or to surrender it and join her relatives in the ruling class. 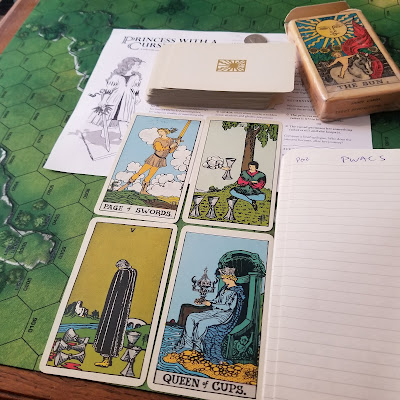 Fleeing the ceremony and running off into the woods, Princess Paige immediately found herself grateful for the warmth (and somewhat practical length) of her fine gown. The gown itself was a compromise she had made with her mother, something utilitarian enough to travel in, but fine enough to be suitable for the ceremony.
Almost as soon as she fled the ceremony, Princess Paige had abandoned her shoes though, figuring that she'd be quicker in her bare feet. At first, the shoes had seemed heavy, too tight and stifling, but now, running barefoot through the wilderness, she found herself starting to wish she hadn't left them behind. The shoes had been a gift, a gift she had ignored because she had been so focused on greater things, more exciting things.
As she ran, she found that she could feel something from the sword. Thoughts? Emotions? Yes, that was it. The sword was sad. Three times, it had led masters into the wilderness in search of themselves, and three times it had failed. Another two times, the result had been different, but the sword held all its stories tight and was not willing to hand over every detail just yet, for fear of how such stories might sway the princess in her own journey. 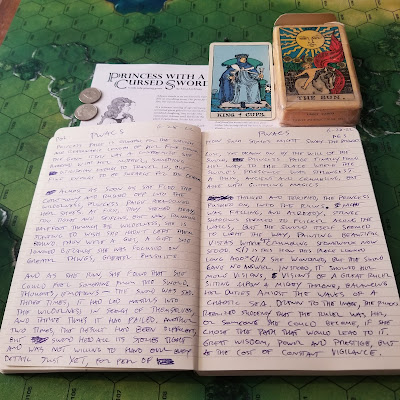 Lost, yet drawn on by the will of the sword, Princess Paige finally found her way to the place where the sword's presence was strongest. A ruin rose jagged into the sky at the end of her path, its broken walls ancient and crumbling, yet still alive with glittering magics.
Thrilled and terrified, the princess pushed on, into the ruins. Night was falling, and already, strange shadows seemed to flicker along the walls. The sword itself seemed to light the way, painting beautiful vistas where only decaying stonework now stood.
Is this how this place looked long ago? The princess wondered, but the sword gave no answer. Instead, it showed her more visions, visions of a great ruler sitting upon a mighty throne, balancing her duties amidst the waves of a chaotic sea. Drawn to the image, the princess realized suddenly that the ruler was actually herself, or rather someone she could become, if she chose the path that would lead to it. Great wisdom, power and prestige would come with that future, but all at the cost of constant vigilance and submission to her duty as ruler of the kingdom. 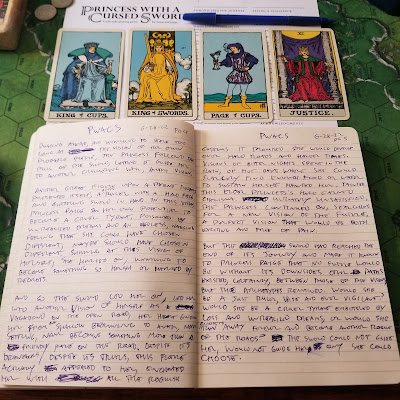 Pushing ahead, and unwilling to stare too long at the vision of her own probable future, the princess followed the pull of the sword, letting it guide her to another crumbling wall, another vision.
Another regal figure upon a throne suddenly presented itself, a bitter ruler with a hard face and a glittering sword in hand. In this vision, Princess Paige saw her own potential to become a cruel tyrant, poisoned by unrealized dreams and an endless, nagging feeling that she could have chosen differently, maybe should have chosen differently. Shivering at this vision of herself, she hurried on, unwilling to become something so harsh or harried by regrets.
And so the sword led her on, led her into another vision of herself as a vagabond on the open road, her heart guiding her freely from one shallow beginning to another, never settling, never becoming something more than a friendly face on the road. Despite its drawbacks, despite its trials, this future actually appealed to her, enchanted her with all of the roguish charms it promised she would develop over hard roads and harder times. Visions of bitter nights spent in the rain, of hot days where she could scarcely find enough food or water to sustain herself haunted her, tainted this elder princess's hard-earned charisma. Ultimately unsatisfied, the princess continued on, searching for a new vision of the future, a perfect vision that would be both exciting and free of pain. 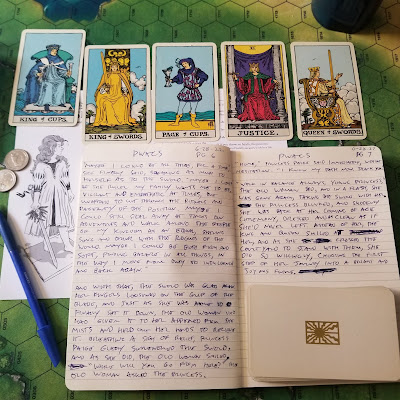 But the sword had reached the end of its journey and made it known to Princess Paige that no future would be without its downsides. Other paths existed, certainly, between those revealed in her visions, but the archetypes remained. Would she be a just ruler, wise and ever-vigilant? Would she be a cruel tyrant embittered by loss and unrealized dreams? Would she choose to turn away forever and become another rogue of the roads? The sword could not guide her, would not guide her. Only she could choose.
"Maybe I could be all three, for a time," she finally said, speaking as much to herself as she was to the sword. "Maybe I could be the ruler my family wants me to be, vigilant and empathetic at times, but unafraid to cut through the rituals and pageantry of the position. Maybe I could still steal away at times on adventures and walk among the people of my kingdom as an equal, sharing song and drink with the rogues of the world, anonymous, even if only for a day. Maybe I could be both firm and soft, finding balance in all things, in the way I move from duty to indulgence and back again."
And with that, the sword was glad again. Her fingers loosened on the grip of the blade, and just as she was about to finally set it down, the old woman who had given it to her appeared from the mists and held out her hands to receive it. Breathing a sigh of relief, Princess Paige gladly surrendered the sword, and as she did, the old woman smiled.
"Where will you go from here?" The old woman asked the princess.
"Home," Princess Paige said immediately, without hesitation. "I know my path now. Thank you."
"Walk in balance always, young princess," the old woman said, and in a flash, she was gone again, taking the sword with her. The princess blinked, and suddenly she was back at her coming of age ceremony, as clean and proper as if she'd never left. Ahead of her, the king and queen smiled at her, and as she crossed the courtyard to stand with them, she did so willingly, choosing the first step of her journey into a bright and balanced future.

Labels: Princess With A Cursed Sword