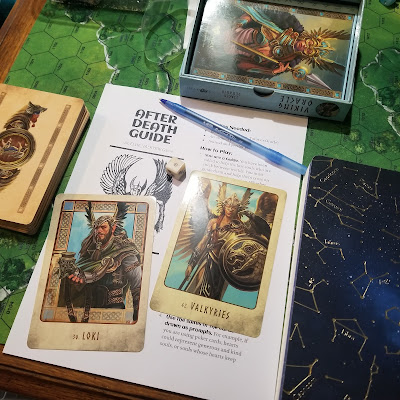 Whenever I release a new game, I like to show off examples of how the game is played. There's a lot more playtesting behind the scenes, sure, but final run-throughs with pretty dice, cards, etc. are always fun to do once the project is complete.

For this particular session, I decided to play only one "night," and to go with whatever the cards threw at me.

Using my Viking Oracle deck and a handmade bone die, I promptly rolled a 1 and drew some interesting cards. Drawing a card to represent my main character, I drew Loki, which already struck me as something that would be a bit of a challenge. Put myself in the shoes of Loki? Whew, man, but ok! Challenge accepted. For the one soul I was going to work with, I drew the card "Valkyries" which might have been easy for me if I'd drawn it first, but as a soul that's stuck? Yikes. I rolled a five for difficulty. Not too bad.

Again, though, challenge accepted. Maybe, I thought, this would present an opportunity to create a sort of fable, like a lost tale from the Eddas. In none of the stories does Loki interact with any valkyries, but in this story, it's going to be the whole focus.

Record of play begins below. 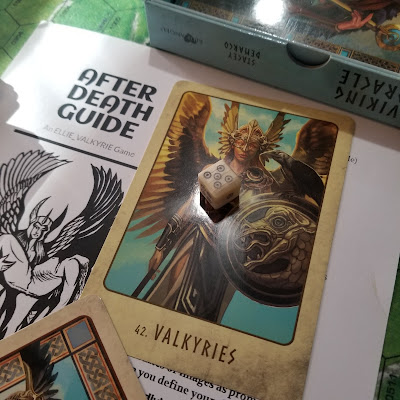 Loki was on one of his many jaunts along the outskirts of Jotunheim when he came across a pack of valkyries locked in an intense discussion about what to do with the spirit of an honored dead they had brought to the border between worlds. Being endlessly curious, Loki listened in on their conversation, and began to consider their plight.

"We can't take her to Hyrrokkin's hall," Hildr said, emphasizing her statement with a sharp motion. "She died in battle. Half the slain go to Odin and half to Freyja. Everyone else goes to Hela. That is the law."

"There are exceptions," Kára said. "I have ferried the honored dead to Frigg's hall and souls of strong laborers to Thor's hall. This one dedicated her life to Hyrrokkin and died with the giantess's name on her lips. It is only fitting that she be ferried to the hall of the one she served."

"That's exactly it, though," Gunnr spoke suddenly, offering her own opinion. "Hyrrokkin is a giantess. We are pledged to Freyja and Odin. If we deliver even one spirit to the hall of a giant, are we not betraying our own by making the giants stronger?"

"Might I offer an opinion?" Loki spoke up suddenly, inserting himself between the Valkyries, who watched him with wide-eyed uncertainty. Meeting each Valkyrie's stare, he smiled, trying to put them all back at ease. "Kára, you have delivered souls to Tyr's hall, have you not?"

"I have," Kára affirmed, nodding her head.

"The gathering of the cauldron large enough to brew ale for all of the gods," Gunnr said. "I have heard the story."

"It is said in that story that Hymir's son is none other than the one-handed god Tyr," Loki winked at Kára. "If Tyr is the son of a giant, does that not also make him a giant?"

Hildr and Gunnr looked at each other in the pause, but Loki continued.

"If Tyr is a giant, then delivering any kind of honored dead to his hall would be an act against Odin, would it not be?"

"It is different," Hildr stated flatly. "Tyr is allied with Odin. What makes his hall stronger makes us all stronger."

"And is Hyrrokkin at opposition to Odin?" Loki asked, feigning innocence. "Of all the stories that I have read and heard of the Aesir, the Vanir and their enemies, never once has there been any kind of animosity between Hyrrokkin and Odin. Rather the opposite, actually- she helps even though she is not entirely trusted by Thor. If I remember my stories correctly, many of the Aesir would actually willingly stand between her and Thor if it came to a disagreement."

Hildr swallowed then, and turned to Gunnr, who could only meet her stare for a moment before looking away again. When Hildr finally looked back to Loki, she found him smiling sweetly, expectantly.

"I suppose we could deliver this one honored dead to Hyrrokkin's hall," Hildr said, glancing back at the soul the Valkyries had carried to the divide between worlds. "Such spirits are rare enough, and your points are well taken, blood brother of Odin. Thank you for your wisdom."

And then, as Hildr scooped up the Valkyries' charge, the three rose into the sky as one and took wing upon the winds between the worlds. Loki smiled then, but what his thoughts were after such a meeting, no one but he could say.

Get your copy of After Death Guide here.