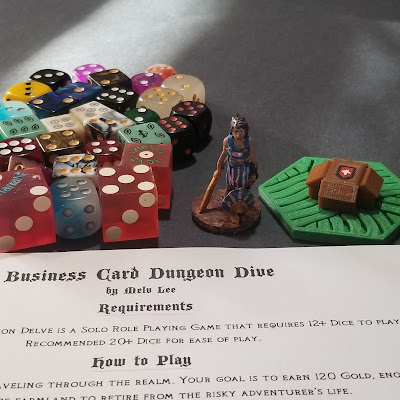 I really need to stop rolling so many ones, lol.
Recently, I returned to the world of Melv Lee's Business Card Dungeon Delve, which I discovered through Melv's own excellent YouTube channel. This is my second playthrough of the system, and this time I am fully embracing the hexcrawl play that I houseruled last time, using 3d printed Pocket Tactics tiles from Ill Gotten Games. I've always loved the idea of using these tiles for mapping out a land or a world, and they're literally perfect for flashy hexcrawling on a larger scale. 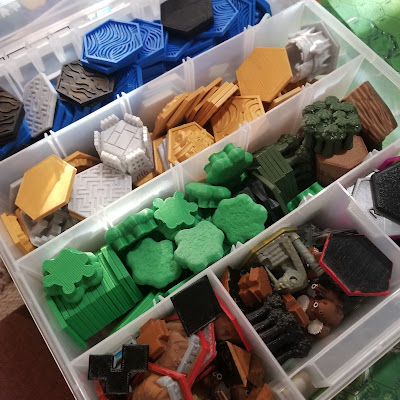 My hero this time is Helene, a weathered old veteran amazon from a distant place called Thracichaea who is just trying to get home after being stranded in this dark, northern land. To represent Helene, I'm using a 3d printed miniature of an Amazon Hoplite Veteran from Punkin' Figs.
A record of play follows. 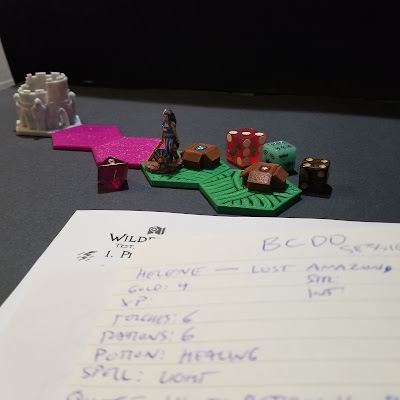 It has been many years since Helene has seen home. The shores of Thracichaea whisper only in her dreams, and these days, she has almost given up all hope of ever leaving the lands where she's come to live as a vagabond, a pariah, surviving only on what she can find through endless adventuring.
But there is hope. There is word of a ship willing to brave the tumultuous seas, but the price for passage is steep. No less than 120 gold pieces. To Helene, it seems almost like an insurmountable goal, but if she doesn't try, she'll never be able to live with herself. If it gets her home, then it's absolutely worth the cost.
And so begins her journey.
On day one, Helene sets out from the settlement of Redcross and heads northwest chasing rumors of a ruined tower that may hold riches she can put toward the cost of passage home. On the road, she travels across a great plain and passes through the neighboring settlement of Bluestars, though she does not stop. 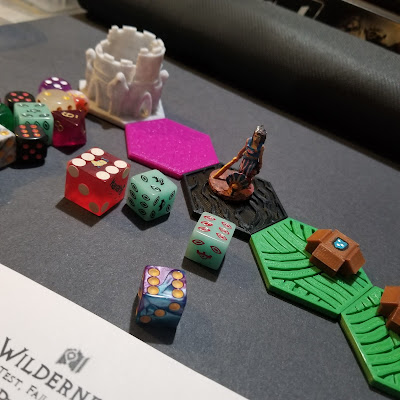 On her second day, she crosses from the peaceful, breeze-blown plains around Bluestars and trudges down into a swamp, encountering a thug. Soon, they are beset upon by a wyvern, which seems intent on catching and eating them both.
The battle with the thug is quick. Helene's sword is sharp, and though the thug cuts her once, she catches him in the throat with her kopis, seizing his money pouch and sprinting away from the wyvern as fast as her combat-toned legs can carry her. Four times, the wyvern swoops at her, and three times it snatches at her, tearing at her skin. When she escapes, it's only narrowly, clearing the swamp and hiding in a gully until the wyvern leaves in search of easier prey. Resting, catching her breath, Helene quickly bolts down the healing potion that she's been carrying, hoping that being harried by the wyvern ends up being the worst of her worries.
On day three, Helene continues through the swamp, fighting off the despair that is slowly eating away at her. Grimacing, but determined to push on, she finds herself ambushed by a vagabond who makes the mistake of believing she might be an easy mark. Tired from trudging through the swamp, she gives him the opportunity to run away, but when he doesn't take it, she shows him how the amazons of Thracichaea fight. Leaving him to rot in the swamp, she takes his single measly gold coin and continues on to the ruined tower she has come seeking. 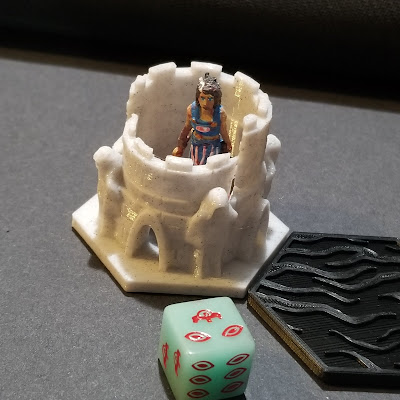 Entering the tower, she sees that it is little more than a scaffold of stone over three subfloors. lifting her torch, she descends to the first level, which appears to be the remains of a library. Not much is left, not with the two barbarians who have made a bonfire out of most of the remaining books. The corpse of the librarian rests nearby, dagger still in hand.
Unfortunately for Helene, though she greets the two barbarians and smiles, they don't understand her language and they decide to make a game of beating her up instead. When they finally leave, chuckling to themselves, Helene crawls over to what is left of the librarian and recovers the dagger, immediately recognizing the radiance of magic on the blade. Grinning at her luck, she picks herself up and proceeds deeper into the dungeon.
On the next floor, Helene finds herself crossing an ancient stone floor amidst an ominous series of crypts. The first trap, a pit, is easy to avoid, but the spike trap on the other side proves more difficult. In the end, Helene takes two damage when the spikes dart out and nearly impale her against the wall. Dusting herself off, she suddenly finds herself face to face with an assassin. Try as she might to parry his attacks, he swiftly gains the upper hand and stabs her a couple of times before she can escape him, pushing deeper into the dungeon and losing him somewhere in the shadows.
The final floor turns out to be more crypts, and little else. Again, she spots and avoids a pit trap, but the maze on the other side proves to be too much for her to easily navigate. Fortunately, the maze eventually leads her out of the dungeon, and on the way, she deciphers a map carved into the stone walls which points to another dungeon, a place about five days journey south-east that may hold valuable treatures. Before setting out again, Helene rests and recovers four hitpoints, bringing her back to 8. Unfortunately, low on food and torches, she decides to head back to the nearest village, taking a different route in an attempt to avoid the swamplands along the way. 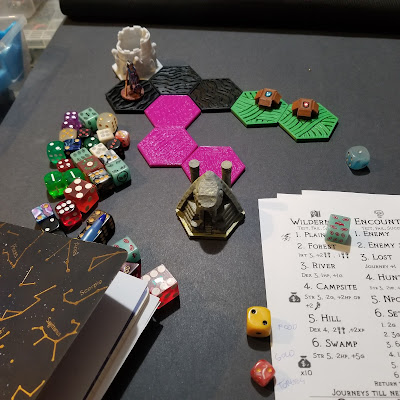 Despair sets in again as Helene quickly discovers that the swamplands are far larger than she expected them to be, and soon she is back in the muck again. Truding through the mud wears her out, and before she can trudge completely through it, she is met by a merchant who offers to help her through to dry land again.
Grateful, she eagerly follows the merchant, but instead of leading her to safety, he leads her to a gang of thieves and they take all of her gold before sending her on her way again.
Feeling beaten and utterly demoralized, Helene continues her journey east toward Bluestars, hoping to finally find a bit of kindness and hope in this soggy land full of thieves and horrors.
On Day 6, Helene finds herself on the shore of a rushing river and reluctantly decides to try to cross it. Things are looking good until she slips and falls, losing her rations sack and the last of her food. Soaked to the bone, screaming and shouting in the middle of the river, she cries out a desperate plea to the gods of this land, of any land.
"Please!" she yells. "Please! End this Torment! Help me!" 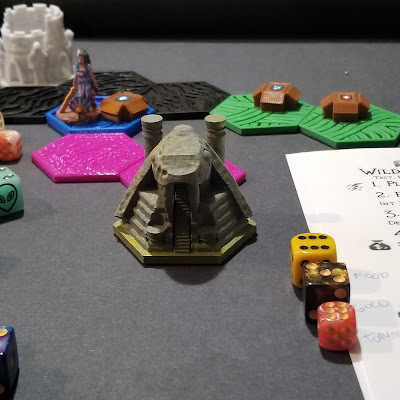 As fate would have it, a tiny voice answers back, a child on the opposite shore. Bewildered, Helene stands awestruck, but soon there are others, a dozen hardy folk from a nearby fishing village. Coming to her aid, they help her out of the river and lead her to their settlement for rest and a chance to dry her clothes and boots for the first time in days.
(At this point, it's clear that Helene is not likely to survive, as she's out of food, gold, torches and has almost no HP left. Instead of ending the session and starting a new character, I house-ruled a new start for her thanks to the kindness of the people of the fishing village.)
The next two weeks go by in a pleasant blur. Moved by Helene's struggle to get back home, the villagers of Bluecross offer to help her, give her new provisions and give her time to heal in exchange for help hunting and fishing. It's a nice break from the rigors of adventuring, but in the end, her growing homesickness urges her to leave again, to set out for the ruins of The Serpent Temple to the South. Maybe there she will find something valuable enough to secure her passage back to her homeland. Maybe there she will finally find her salvation.
Day 21 finds her setting out amidst the teary farewells of the friends she's made in the past two weeks, following a well worn path that fades as she makes her way into a dark and brooding forest. Tall trees close in all around her, and every step seems haunted by the sounds of snapping twigs, birds taking flight and strange animal calls she doesn't recognize. Wandering around in wonder, she gets lost almost immediately and expends an extra ration trying to find her way out. Though she believes that she is heading south, the canopy overhead is too thick and she ends up emerging from the forest further north-east of her destination, in a stretch of fields between Bluecross and Bluestars. By the time she realizes how lost she is, though, she has already wandered so far in search of a way south that she comes within sight of a hill she has no memory of ever passing. 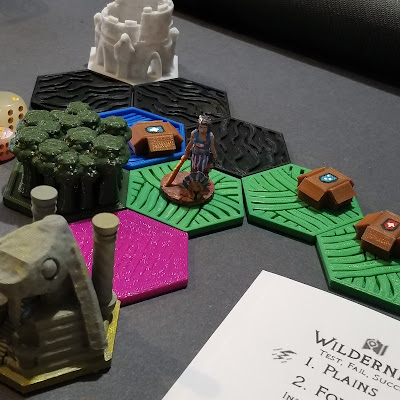 On Day 23, she attempts to climb the hill and expends the last of her rations trying to do it. For better or for worse, she finds herself facing both a bear and a boar on her way up the hill. As an experienced hunter, she easily slays and begins to field-dress the boar, but before she can store away the meat for later, the smells draws a bear. 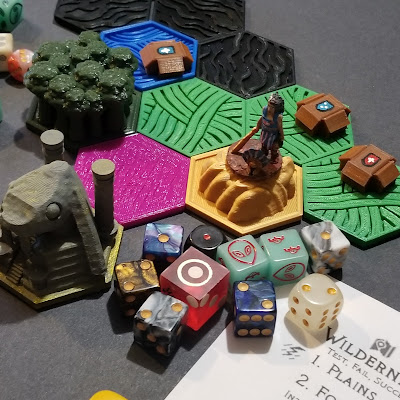 The fight starts well for Helene, but in the end, the bear proves too much for the amazonian hoplite stranded so far from home. Though she nearly defeats her enemy, a string of fumbles with her blade ultimately costs Helene her life and she dies upon the hill she'd chosen to make her final stand upon.
I guess it's true what they say, that we all have our own bear to cross.
(I think it's time to put some dice in dice jail.)