Meanwhile, in the Periphery. . . 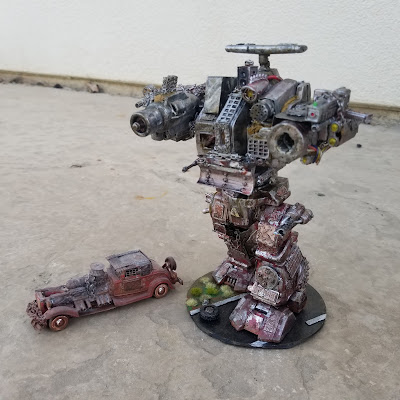 Captain Mac "Stogie" MacGregor's Rifleman may look like it's beat to hell, but that's a Clan UAC 10 on its right arm and an SLDF gauss rifle on its left. The rest is there just to scare the sh!t out of infantry.
Recently, I completed this fun piece which has an even more interesting back story to it. Originally, this was one of those Macross Raider X destroids that came out as part of the Exo-Squad toy line in 1994. I was ten years old, a rabid fan of Macross and Battletech, and so I had to have this guy. As a kid, I played with this thing until it was worn out and dirty, and then, when I was sixteen, I played a game where I took a pellet gun to all of my old robot toys and blew them apart in a kind of 28mm Battletech campaign in the mud with live fire. Surviving countless missions, Stogie's rifleman took a lot of damage, but with the magic of superglue, I repaired the mech between sorties using the blown-off chunks of his fallen enemies. It was a hot, brutal summer, and at the end of that year, I put him in a zip lock bag where he stayed for 22 years.
Then, this year, this summer, I dug him out of his bag and decided to finally do something with him. 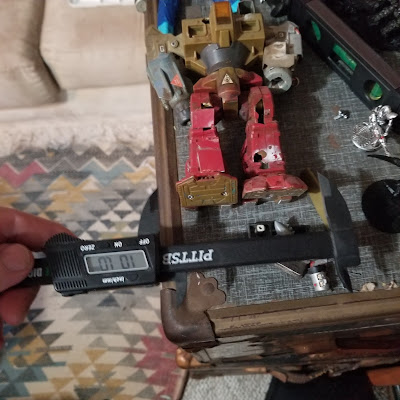 In making this guy into art (or rather, a playable piece for wargaming), I realized that the first thing the old Rifleman needed was a base. Using CAD and 3D printing, I created the perfect base, a bit of road and rough land that I could paint and work with. I also broke out the gorilla glue and started posing him so he had a nice, dynamic look instead of just the flat, arms down pose that he'd fallen into after being in the bottom of a box for twenty years. 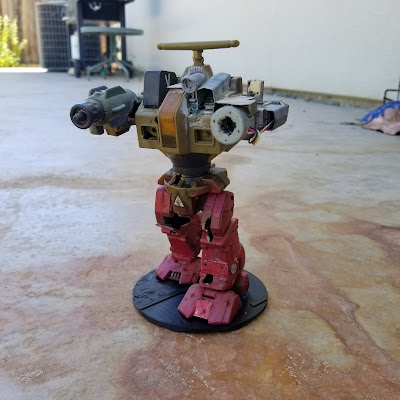 Here's Captain Stogie's ride with the basic equipment it had on it twenty years ago, freshly posed and set on a brand new 3d printed base. Interesting, sure, but still mostly just potential. 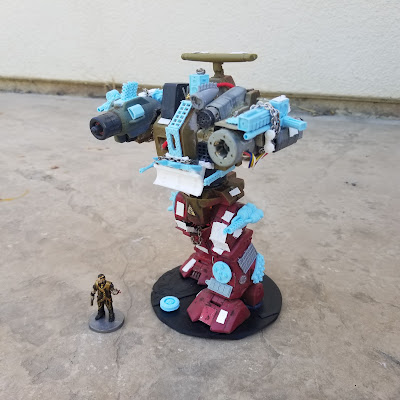 When I was heavy into Gaslands, I printed a ton of components for gluing onto old hot wheels, but most of those components ended up just sitting in a box, collecting dust. This project gave me the opportunity to break out those bits and use them for something new and fun. 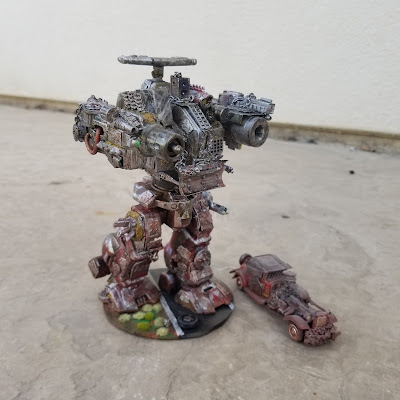 After gluing all those bits onto Captain Stogie's rifleman, I proceeded to give him a lot of touchup using chrome, gold and copper dry brushing followed by several targeted washes of Arteza Fancy Black acrylic. I love the oily look that the Fancy Black gives, which is especially cool for Gaslands models. Makes them look like they're really worn out, like they're held together with spit and prayer. 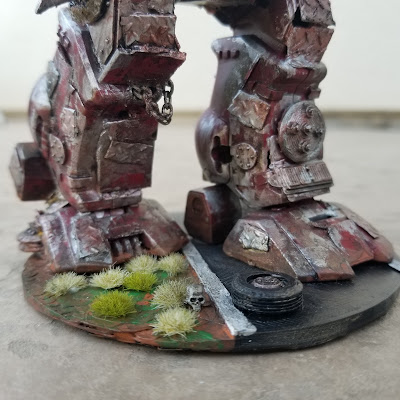 In this shot, you can see the 3d printed bits and textured plasticard I used to seal up the pellet-gun holes in the legs. The tufts are of two different colors and the little skull is GW from a skulls kit. 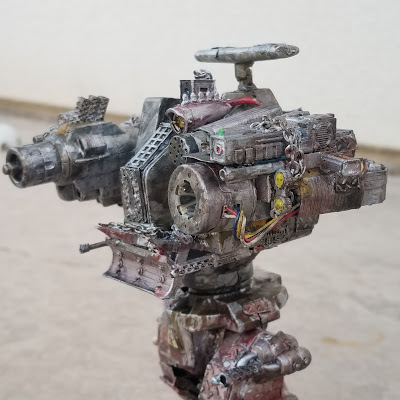 With the two main spotlights blown out, Captain Stogie would need additional light sources to bolt on and replace them, hence the GW spotlight and the 3d printed headlamps on the arm. The gauss rifle is, of course, a piece of an old CRT television tube that I scavenged at a gun range more than 25 years ago. Can you spot the industrial staples? How about the Exo-Squad parts? 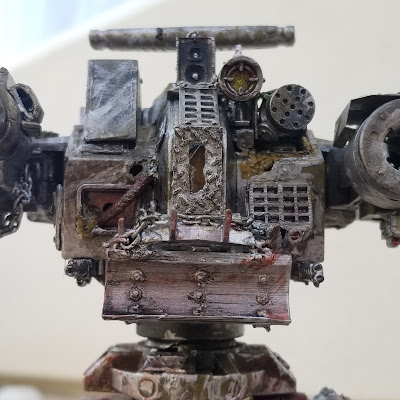 The braided cabling you can see in some of the shots is leftover from when I replaced the heated bed on my 3d printer, while the chains are from necklaces I've picked up at Goodwill over the years. I also tried to give the impression that the mech was partly held together with expanding foam, making it extra gnarly. 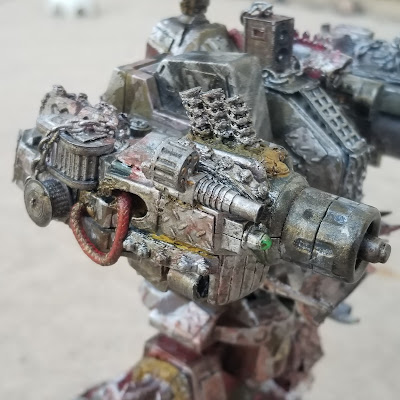 Technically, I think this piece would be best played at 1/64 scale (i.e. Gaslands) but I'll probably be more likely to use it for heroic 28mm scale. How will I stat it out? We'll see! 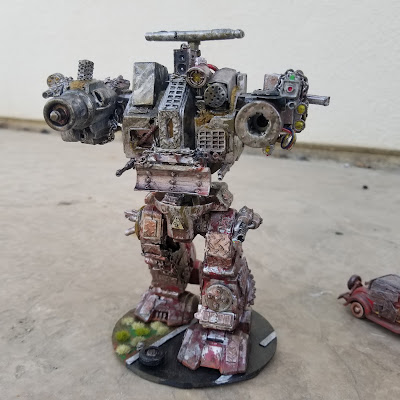