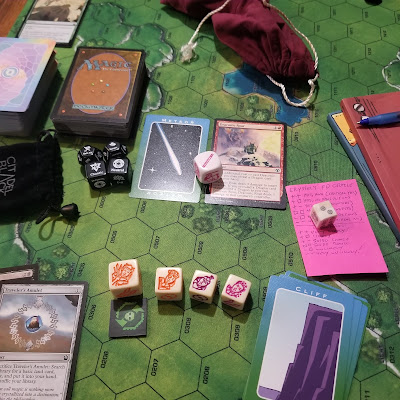 Session 2: In which things start to get really interesting.

OOC: What is the half-elf priestess's name?

"Gathering up ragged souls again, are we, Norenas?" someone asks, a tall shape that gathers out of the shadows as druids arrive to soothe Barbastus. Dressed in green with a bow at hand, he stands out as just about the most stereotypical half-elf ranger the amazons have ever seen. "It is good that the grove provides as well as it does in these otherwise dark times."

"Pharika's influence grows in the valley," Norenas says, gesturing back at the amazons. "These sisters are far from home and the strongest of them was sickened by the quag. A little kindness will not harm the grove, but the witholding of it could well have killed them."

"I've always had a soft spot for plucky underdogs," the ranger says, and as he crosses to stand with the priestess, their fingers intertwine in a gesture that is more tender and loving than friendly. When they part, he turns back to the amazons. "I'll leave you in Norenas's care for now. Remember that this is a sacred place. Treat it always as such."

"We will!" Thyia says excitedly, her smile fading a little as the ranger turns without a word and disappears into the trees.

"This way," Norenas says, leading the amazons further into the grove.

The grove itself is huge and verdant. Wild trees heavy with fruit sag over a meadow bristling with bushy herbs and grasses. The great reindeer Barbastus towers above it all, nibbling off the tops of tall conifers, but otherwise eating very little. Meals of fruit and nectar come in bowls made from the caps of massive acorns as the amazons bed down on soft grasses, and as the night falls, Alekto begins to play her flute.

Lysandra drifts off to sleep almost immediately, but for Ptolema, rest does not come easily. Her eyes are on the sky, and when the portent she's felt with a mounting sense of dread and urgency finally comes, she sucks in a deep breath. A light flares in the sky, a flashing, like a massive comet streaking through the stars, roaring and rumbling louder than even the largest, throatiest dragon Ptolema has ever heard.

The sound wakes the whole grove. Druids rush about with glowing pixies on their shoulders, desperately searching for the noise. Rising from his own rest, Barbastus answers the roar back with his own bugle-call, and when Norenas rushes back to where the amazons have bed down, her eyes are wide and terrified.

OOC: Is it a dragon?

OOC: Is it something worse?

"I don't know." Norenas says. "I've never heard anything like it."

"Where is it?" Ptolema asks, looking up as the ranger rushes in to stand with Norenas.

"Gone, but surely still nearby," the priestess says, reaching out and touching the tips of her fingers with the ranger.

OOC: Are Norenas and the ranger a thing?

"No beast of this land could make such a sound," the ranger says, looking nervously up toward the sky, toward the tops of the trees.

OOC: What is the ranger's name?

"Not here, not in this sacred place," Norenas responds. "Elovar, what have you seen?"

"Same as you, same as the others," he says, and the nervousness is clear in his voice. "Lights in the sky and a mighty roar. Ill omens, has to be, to make Barbastus bugle so."

But Ptolema stands, turning her anxious eyes toward the place where the omen was bound, somewhere in the woods ahead. Swallowing, she sets her jaw as firmly as she can, touches the wand at her belt.

"The gods always have a plan," she says, the words coming as firm as they are cryptic. Turning back, she looks to her sisters. "We are guests in this place, and hardened warriors. We are grateful for your hospitality. We will seek out the omen and return."

"Lysandra should stay," Norenas says, closing the distance between herself and the old veteran. "I will watch over her."

"Then I will go with you," Elovar tells Ptolema, readying his bow. "I know this grove and the lands beyond better than most."

"Then we could not ask for a better guide," Ptolema says, nodding once, firmly. "Sisters, Alekto and Thyia, pack your things. We leave immediately." 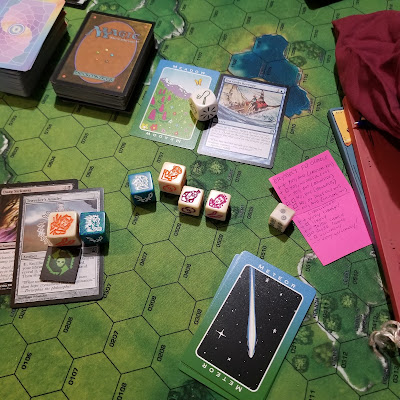 (I'm currently representing Norenas and Elovar with a couple of Coral Elves.)
Rushing through the meadow and to the edge of the grove in search of the source of the strange, horrific roar, Ptolema, Alekto, Thyia and Elovar reach the outer wall of brambles and pause only long enough for the druids to use their magic to open a door for them to pass through. Once on the other side, Elovar stops suddenly, makes a sharp gesture for the others to stop as well.
"That scent," he says, and there is fear in his voice.
OOC: Is it a hydra?
(Oracle:) Yes.

"Hydra," Ptolema breathes, suddenly very, very worried.
"Thassa's rage," Thyia says, looking wide-eyed at the ranger and her sisters. "First the shipwreck and now this. We must have done something to anger the Sea Goddess."
"What could we have done to anger a god!?" Alekto asks, terrified. "We are simple soldiers! We are blameless!"
"What nation were you going to war against?" Elovar asks.
(Oracle:) Phaisite Empire
OOC: Are they protected by Thassa?
(Oracle:) No, but. . .
"The Phaisite Empire," Ptolema looks to Elovar, meets his eyes evenly. "They aren't among Thassa's protected devotees, but perhaps the very act of traveling by sea to make war on them was enough to invite her rage."
OOC: Were rituals and offerings made to Thassa before the journey?
(Oracle:) No.
"The priestess, (Oracle:) Aspasia!" Thyia shouts over the thundrous roar of the Hydra thrashing through the trees toward them. "Aspasia- she was supposed to perform the rituals to appease Thassa, but I recall that there were no burnt offerings on the dock when we left. She must have forsaken them!"
"For what purpose?" Ptolema asks.
OOC: Was it intentional?
(Oracle:) No.
"It wouldn't have been intentional," Ptolema says, making a quick gesture. "I know Aspasia. She's a good friend. There were many ships on the dock and the priestesses were overworked. Surely it was an accident."
"One we must rectify now," Elovar's grip tightens on his bow. "So, sisters of warfare, tell me. Do we fight the hydra, or is there some way to appease your angry sea goddess?"