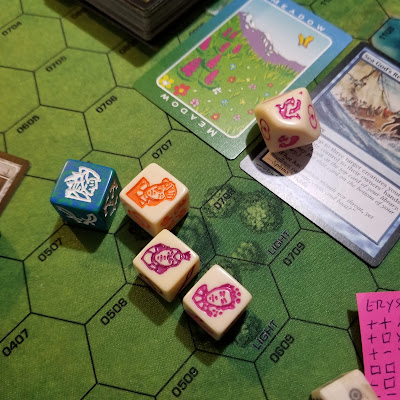 "I'd rather not anger Thassa any further by launching into an attack of her avatar," Ptolema says, hesitant. Looking at her sisters, she notices as Thyia steps forward, her hands already full of the gifts of food from the grove of Nylea.

"Great Thassa, wild Thassa, goddess of the stirring sea," she holds up a huge acorn-cap bowl of nectar as the Hydra comes thundering toward them, its heads slithering over the trees like huge, angry snakes. "We make this offering as an apology for our transgressions! We prostrate ourselves before you. We ask for your guidance and your protection as we travel home.

The hydra pauses, huge feet clawing the ground just short of Thyia, but she does not move, does not startle or try to run. She kneels before the beast instead, laying the offering at its feet.

The Hydra rears up suddenly, and when its feet come down, they smash the offering and splash the nectar all over Thyia. Startled, Elovar raises his bow and looses a pair of arrows immediately, but they bounce off the hydra's glittering hide. Enraged, the avatar of Thassa's rage roars, and suddenly Ptolema realizes that they have no choice but to fight to defend themselves from the great beast. Her eyes go wide, and then she raises her shell-bangled spear and rushes in, howling her own battle cry. 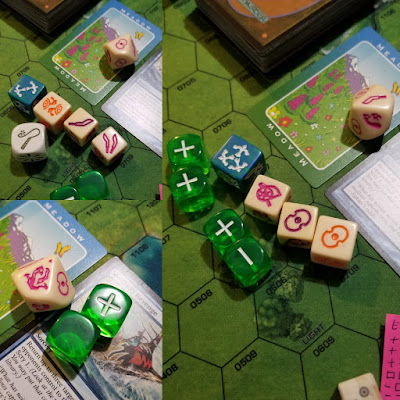 Thyia draws her twin swords with lightning speed, slashing out at the hydra while Alekto rushes in, her own sword flashing, but none of the hits cut through the beast's slick, armored skin. Standing behind her younger battle-sisters, Ptolema raises her spear and shrieks a spell of command to try to calm and cow the hydra, but the spell has no effect.
And then the heads come, lashing out like striking snakes, biting air, descending. Reacting fast, Ptolema and Alekto raise their shields, bracing themselves as the hydra's heads hit and bounce off. There is a shout from Elovar as he looses all of the arrows he can, piercing the eyes of several heads and leaving them to hang lifeless while the last head darts in to bite at him and Thyia.
OOC: Is Elovar dead?
(Oracle:) Yes, and. . .
OOC: Is Thyia dead?
(Oracle:) Yes, but
OOC: Is the hydra slain?
(Oracle:) Yes.
Elovar screams as the hydra lashes out and bites him in half with its last, slavering maw. Howling and wild with fury, Thyia rushes in and uses the opportunity to bury her blade into the soft flesh of the beast's throat, slaying it in a series of vicious, hacking blows. Ptolema shouts, reaches out, but it's too late, and as the hydra collapses, it crushes Thyia, grinding her into the dirt.
Alekto is the first to recover. Crying out, desperate, her eyes wet with tears, she rushes to the side of the dead hydra and tries to push it off of Thyia, but the beast is too heavy and, for Thyia, the action comes far too late. In the end, all Alekto can do is collapse against the hydra's corpse and cry, cry for the loss of her sister, for the loss of so many sisters, and all at the hands of a cruel and capricious sea goddess.
"I will find a way to hurt Thassa for this," she whispers as Ptolema helps her back to her feet, but the older amazon only shakes her head.
"Blood for blood and feuds against gods never end well," she wraps her arm around the younger woman's shoulders, leads her away from the carnage. "We were lucky to only lose one of our number. I feel that Thassa accepted our offering, and that all would have been well had Elovar not been with us. In the end, he paid the ultimate price. Thassa has him now. We should count ourselves as lucky and leave it at that."
Alekto looks up at Ptolema with angry, tear-streaked eyes, but says nothing as they make their way back to the grove. 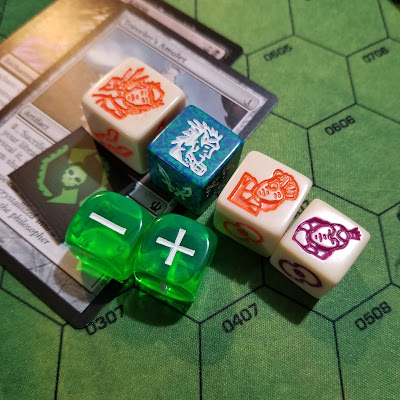 Lysandra and Norenas look up as Ptolema and Alekto approach. Both see the grime and blood on the two warriors, and both know immediately what has happened. Lysandra looks away, closing her eyes against the buds of bitter tears, knowing that another amazon under her command will never see the shores of home again. Norenas, on the other hand, becomes frantic, starts looking around with wide eyes. "Where is Elovar?" she demands, and when Alekto cannot even meet her gaze, she starts to shriek. "Where is he!? Where is Elovar!?"
"He panicked," Ptolema says firmly, trying to hold some iron in her eyes. "We faced a hydra, an avatar of Thassa, and he panicked. In the end, it was his arrows that saved our lives, but is was his fear that killed him."
"His fear!?" Norenas flies into a rage, her hair stirring like snakes. "You brought the hydra here! You enraged Thassa! All of you! You brought this curse to our grove! You are the reason Elovar is dead!"
OOC: Is she going to kick us out?
(Oracle:) Yes, but. . .
"Norenas, I-" Alekto tries, but the priestess isn't having it. Snarling, she turns around and yanks Lysandra to her feet, bodily shoving the old veteran at Ptolema.
"Go!" the priestess shouts. "Leave this place and never return."
Instead of arguing, instead of pleading, the amazons only bow quietly, gather their things and set out on the road again.
- - -
Rule change alert! Ok, so when I started this campaign, I only had a vague idea of what I wanted to do for combat, but I had to kind of codify it this session. Basically, character dice and enemy dice are rolled against each other.
1. Shield icons protect an individual unit. It is guarding, but can also take a hit and guard another unit instead.
2. Weapon icons indicate that the character is striking the enemy. Damage is indicated by the number of weapon icons, except with d10 monsters. They're 4hp and do 4x whatever their icon rolled is.
3. Enemies that roll faces re-roll. Characters that roll faces get to pick their result.
4. Level = HP, so big dice have 3 hp, small dice have 1, etc.
5. If a die would take enough damage to kill it, roll oracle dice. Is it dead? Yes/No, etc.
6. Exception to previous rule: small enemy dice. They're basically cannon fodder. No save roll.
7. Maneuver rolls count as ranged attack or shield, player's choice.
8. Magic icons are basically wild cards. Declare some kind of magic and, if it is against an enemy, roll the yes/no oracle to see if they save. No save for casting spells on friends.