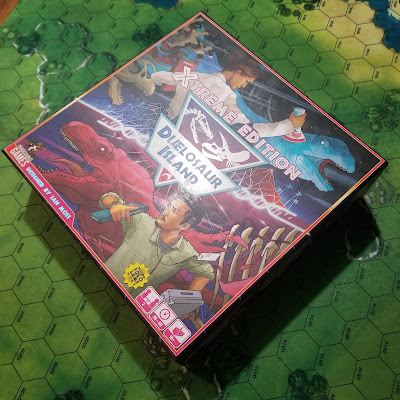 Recently, I got super lucky while I was out thrifting and I ran across the Kickstarter edition of Duelosaur Island just sitting on a shelf for three bucks. I already own Dinosaur Island, but I've always been curious about this smaller, quicker, lighter version of the game. I didn't have very high expectations for it (especially since it ended up at a thrift store) but boy, I should have. Duelosaur Island turned out to be way more fun than I thought something like this ever could be. 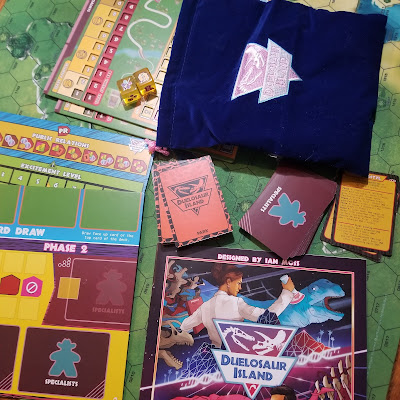 Where should I start when talking about a game like this? I have to admit, I was a massive Jurassic Park fan in the 1990's, so the aesthetic of Dinosaur Island (and by extension, Duelosaur) absolutely was always enough to sell it to me. Pandasaurus has captured the vibe of the classic film so perfectly that, if the game had come out two decades earlier, I'd have worn the board and dice out years ago. Even now, at my age, I have found it hard to set the game down once I started playing it. I kept wanting to come back to it, to see what dinosaurs I could collect in my park before beating the solo mode into the ground.

That's no critique on the solo mode either! One of the things that drew me to this game when I picked it up was the fact that it has a robust set of automata built into it. On my first try, I, of course, went with the easiest difficulty of automated opponent, and thoroughly trounced it. Next time, I'm going to go for a more middle-of-the-road difficulty automatic opponent, and I fully expect it'll mop the floor with me. 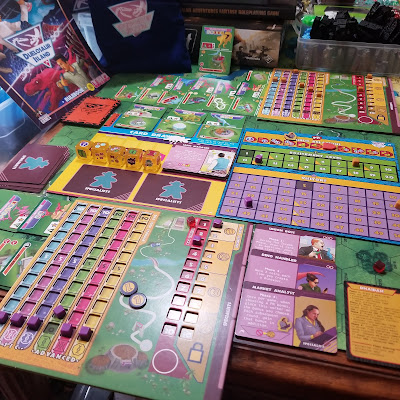 I think, if this game has any kind of downside, it's just that it has a bigger footprint than I'm used to. That's not a problem if you have a reasonable amount of table space, but as you can see, I wasn't reasonable when I first played this game. Duelosaur Island is definitely manageable on your average-sized dining room table, and next time I play it, I plan to use a bigger area so I can really appreciate the little details (like the amber DNA dice!) that make the whole thing look very busy when it's crammed together like I had it in the picture above.

Also, I had to clip the corners and take a sharpie to the starting cards for each side, as they have the same exact backs as the rest of the cards. Sure, they have icons on the front that make it easier to identify which cards belong to which company at the start, but these little personal modifications make identification easier right out of the box. 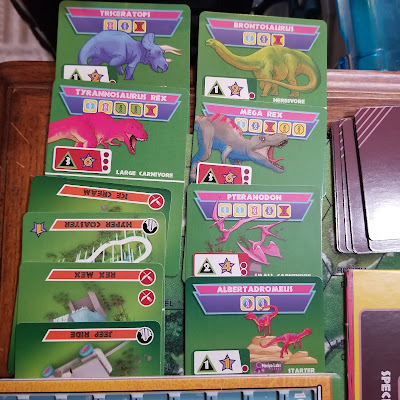 So what kind of park did I have when my first game ended? A totally amazing one! I had some pretty large and dangerous carnivores to awe and impress my park's hordes of wealthy visitors and I even had a few rides and concession stands to boot! As you can see from the picture above, there's a certain amount of absurdist humor to the whole game, which just makes the experience more enjoyable.
My opponent's park, on the other hand, was a sprawling mess of attractions, which meant it was pretty much buried under its own weight. The approach to Automata in this game is interesting-- there were no choices to make for me, only instructions to follow, with no real gray areas, so my opponent's park ended up being pretty big and unwieldy, dare I say, unplayable! 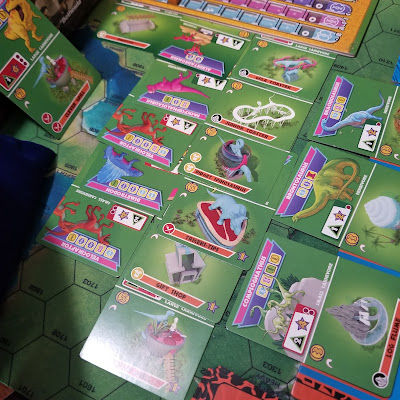 All in all, I can honestly say that if I'd known about the Kickstarter for this game, and if I'd known what a blast it was to play, I'd have been all in at that point. That's also been my biggest complaint about Kickstarter- I always discover the cool games years too late, when its harder to get the special editions of the games. Oh well, thank the gods for thrift stores, at least!
Labels: Duelosaur Island