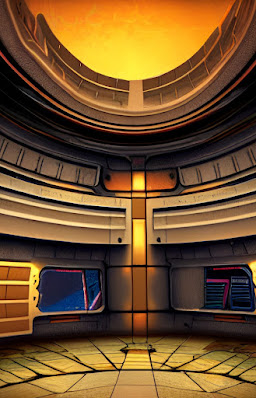 “Thank you both for making the time for this meeting,” Director Calderone says, spreading his hands in a grateful gesture. Opposite him, holograms of Administrator Farin and Doctor Duval look on in varied shades of annoyance, completely ignoring me. “I’ll skip the pleasantries. We’ve detected an energy spike on the other side of the Neoma system consistent with the firing of a mass relay. I have scopes watching the site, but we haven’t registered anything else. The reading was momentary, and everything out there is cold now.”

“You think it’s the Reapers,” Doctor Duval says, the words coming more as a statement than a question. Gray-haired and iron-eyed, she squints as her old eyes search the Director’s face for answers. “How much time do we have?”

“From the limited data we have,” he pulls in a deep breath, sighs. “Right now, Nyx is the closest colony in the sector. If it is the Reapers, Neoma A could see the invasion start within six hours.”

“Why isn’t Administrator Jemison here, then?” Doctor Duval asks, giving the Director the side-eye. “Did anyone think to warn him?”

“I– uh, I didn’t want to cause a panic,” the Director sighs, but Administrator Farin cuts him off.

“Jemison made his decision when he betrayed Cerberus,” Farin says, looking vaguely in Doctor Duval’s direction. Seeing her like this, up close, I can say that she looks exactly like her file photo. Everything about her is precise and immaculate, a carefully cultivated facade. “Let the Reapers have him. It’ll give the rest of us more time to prepare.”

“You always were a cold hearted bitch,” Doctor Duval snaps at the other woman, makes an angry gesture. “Prepare how? We can’t outrun them, we can’t outgun them. The least we can do is warn Wayward Wellspring, let them know so we can all die on our feet, not just the few of us who are fortunate enough to be in the know.”

Administrator Farin gives a polite, tight-lipped smile through the entire tirade. I’d laugh at the face she’s making if it wouldn’t be suicidal. I know the only reason she puts up with Doctor Duval is because she needs Sigil Station to keep the people of Nova Station fed.

“We still don’t know for sure if it is the Reapers,” Director Calderone butts in, trying to keep the peace between the two other women.

“What else could it be?” Doctor Duval bites back.

“The Geth,” I speak up suddenly.

Both women look at me. I’ve already briefed Director Calderone, but even he has barely had time to review the most damning bits of bodycam footage before this meeting.

“I know it sounds impossible, but I’ve seen it with my own eyes.” Tapping through my omni-tool, I pull up snippets of data, clips of video from my bodycam, push projections of them into the air between all of us. “There is a Precursor Vault on Beryl, but it’s more than just a vault. It looks like some kind of communications node or control station. One of the consoles there connected to a dormant mass relay and powered it up at approximately the same instant that Anchor Drop station registered the power spike. I can’t absolutely confirm it, but I think there’s a relay in this system, a relay like the relays the Reapers built back in the Milky Way, and I think that the Geth shut it down.”

“Impossible,” Administrator Farin says flatly, her eyes as hard as diamonds. “The Reapers are a phenomenon unique to the Milky Way, and we brought no Geth with us to The Forge. You’re obviously mistaken.”

“You’ve seen the footage,” I gesture at the clip showing the hologram of the Geth. “What else could it be?”

“I will admit that whatever you encountered on Neoma C does superficially resemble a Geth," Administrator Farin says, "but I say again that we did not bring any Geth with us to The Forge, and I will not entertain the idea that they came through another gate or, worse, got here before us.”

“I’ve seen a lot of vids of Geth, and that sure sounded like one to me,” Doctor Duval breathes a tired sigh, then looks back at Director Calderone. “I’m with Farin on this one, though. Until I see hard evidence, until someone actually encounters a Geth ship or kills one and shows me its corpse, I’m going to have to believe it’s something else, another similar-looking alien or something.”

Pulling in a deep breath, I glance at the director, but he doesn’t look back at me. Instead, he leans forward, puts his hands on the console between himself and the other two women.

“I understand,” he says. “We have a science team looking into the Vault on Neoma C as we speak, and we are still reviewing the data brought back by Commander Schaefer. The fact remains though, that if there is a Reaper-style mass relay in this system, then the Reapers are here, or have been here in the past. We are not alone. We may find familiar allies and old enemies alike in The Forge that we were not expecting to encounter ever again, and that changes everything about this mission.”

“I’ll contact Wayward Wellspring, since no one else seems to care enough to,” Doctor Duval shakes her head. “If they get hit by Reaper forces, then Sigil is going to go completely dark. We’ll push the station into the system’s asteroid belt and freeze everything. There’s less than a hundred of us here, so with tight rationing we might be able to hold out until the Reapers get bored and leave.”

“I’m going to keep all of these findings confidential until we have a better idea of what we’re actually dealing with,” Farin says. “Nova is too tightly-knit to break into a fleet before the Reapers could reach us from Neoma A, but we may be able to buy time for a smaller fleet of refugees to break off and start over in another system.”

“And you’d be on one of those ships, wouldn’t you?” Doctor Duval asks.

“Of course,” Administrator Farin shoots back. “Someone has to lead humanity into the future.”

I look at Director Calderone, but he doesn’t even flinch. He just looks tired. To her credit, Doctor Duval only grunts in response, then reaches out and kills her connection.

Administrator Farin only lingers a moment longer, turning her cold eyes on Calderone.

"I will send regular reports on our observations," Calderone tries to reassure her. Instead of a response, she only inclines her head, just slightly, then disappears in a flicker of static and blue light.

"Tough crowd," Calderone turns to me, tries a smile, but it doesn't stick.

"When was the last time you ate?" I ask.

Instead of answering, Calderone pulls a face. 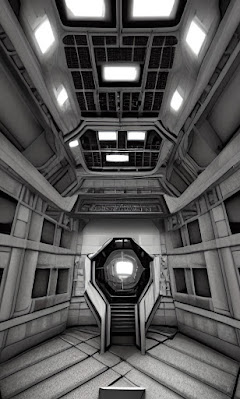