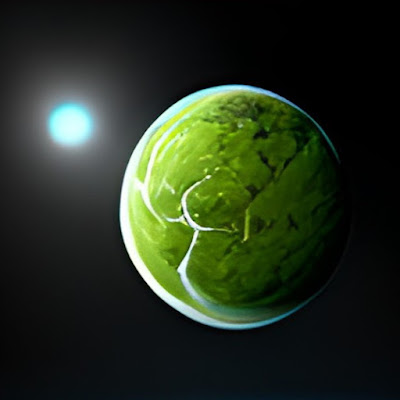 I still think it’s funny that the first human scientist to catalog Neoma C saw this glassy, aquamarine ball and called it Beryl.

I think everyone who looks at the planet gets excited at first. From orbit, it looks so serene, looks like a garden world, but anyone who’s ever glanced over the readings on surface conditions and wind speed variations knows it’s all just looks. The atmosphere is thick and oppressive, humid even, with gusts like a hurricane. It’s also toxic to every kind of life except the stuff that grows there, so yeah, not my idea of paradise.

And the stuff that grows there, well, it can stay down there.

“MISO,” I lean back in my chair, look out over the green curve of Beryl’s cold, wet surface “Do we have a fix on a safe landing site in the grid reference Calderone gave us?”

“I have found what appears to be a landing pad near the source of the Precursor energy readings, Commander,” MISO responds.

“A landing pad?” I blink, thinking. “Did the Grubs get here before us?”

“The area is large and flat, roughly circular, and appears to have been constructed by the Precursors,” MISO pauses, then beeps. “No other activity detected. No evidence of Human or Grub technology.”

“Then take us in,” I put my hands on the controls, tap in a sequence of commands. “And pray the whole mission will go this smoothly.”

MISO doesn’t respond to that last instruction, and I don’t expect him to. Working together, we guide The Ulysses into the glassy atmosphere and descend through air that feels almost viscous on the skin of the ship, gets murkier and heavier as we go. Handing the controls over to MISO for the landing sequence, I cross to the middle of the ship and get suited up. The helmet goes on last, and as I cross out of the ship and onto the mossy landing pad in the heavy, green air, I find myself checking the shields on my rifle, hoping against hope that they hold and keep the atmosphere out. 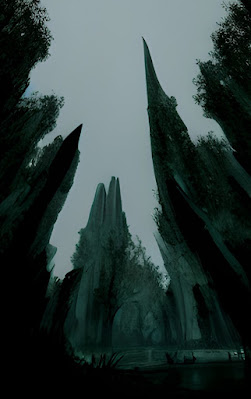 “It is a substantial structure,” wireframe diagrams light up across the viewplate of my helmet, turning and highlighting certain interesting features. “A facility composed of partially buried spires that serve an unknown purpose. I am detecting active energy signatures.”

A gust of cold, wet wind whips across the landing pad, knocking me sideways until I crab into it. “What about this material?”

“Biomechanical, or biomimetic. Analysis is still in progress.”

“Organic?” I ask, my rifle held loosely, my eyes on what must be the door of the vault.

“Partially,” MISO responds. “It is alive.”

That makes me pause. “The whole structure?”

“Analysis is still in progress, Commander.”

“Right,” I grit my teeth, keep moving forward. “I’m going in. Keep recording. Let me know if anything bad comes up.”

The instant the radio goes silent, I hear the clang, the scuffle, the roar. Whirling around, my eyes catch on something huge, something with bulging red cords of muscle surging under a rigid exoskeleton. The beast’s single, oversized eye is completely focused on the Ulysses, and its meter long talons are tearing at the ship’s plating like its made of paper.

“I have found something that may qualify as bad, Commander,” MISO says, but there’s no time for a return quip from me. Turning its huge eye to fix on me, the thing roars again, scythe-like teeth dripping with caustic drool.

There’s half a second where I raise my rifle, ready to stay and fight, but the absurdity of trying to take down an armored cyclops the size of a tank with just my M-76 catches up with me before I can fire. All it takes is for the thing to take one thundering step toward me and I’m running, pushing myself as hard as I can to reach the door of the Precursor Vault.

Size turns out to be the biggest advantage I have. Size, and the servo-augmentation in the legs of my Armax armor. Sprinting across the landing pad, I dodge around a pillar of Precursor tech webbed with algae and slide down an incline for the door. I hear the huge thing chasing me, hear it slam against the pillar and roar in rage, but by the time it gets upright again, I’m already inside, just past the door, back against the wall.

“The creature is moving away. I believe it was startled by our arrival, as barzan gorillas are herbivorous and generally do not present as hostile. We have likely trespassed on this one’s territory.”

“I am registering minor damage to exterior plating and to electrical systems related to the drive core. Bypassing the damage has been successful. Analysis by a certified technician is recommended.”

“Noted. Once we get out of here, we’ll head back to Anchor Drop and get you fixed up.”

Turning back to the interior, I try to get a look at the place, at the reason for all this travel and trouble, and the first thing I notice is how everything seems lighter, like the gravity is off just a little.

And then the walls and floor start to glow, lighting the whole place up in response to my arrival. 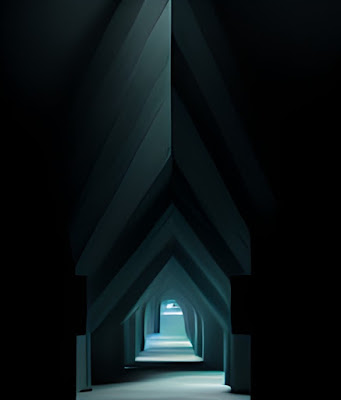