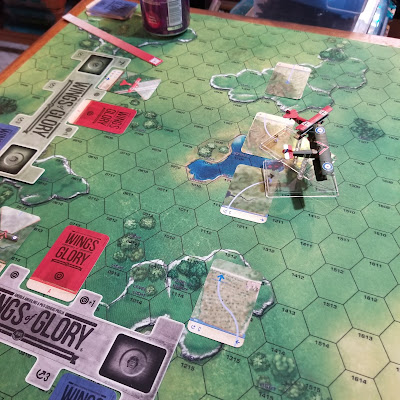 To say it's been a minute since I played Wings of Glory would be a bit of an understatement, I think. I love this game. I love the simplicity of it, and I love how smoothly it plays, but my entire kit has been sitting in a box collecting dust since at least 2016. Even worse, the last time I actually played it, the game was called Wings of War, which means. . . yikes, 2008? Here's the thing, though, even though it's been probably fourteen years since I've played this game, I've never forgotten how much fun it is. Sometimes it just takes me a while to get around to getting a game on the table. I have literally hundreds of them, and only time for about one game a week, maybe, which is why my fully tricked out copy of Arham Horror has been sitting on the shelf untouched for fifteen years. Maybe I'll get that one out again in the near future too. Fingers crossed! 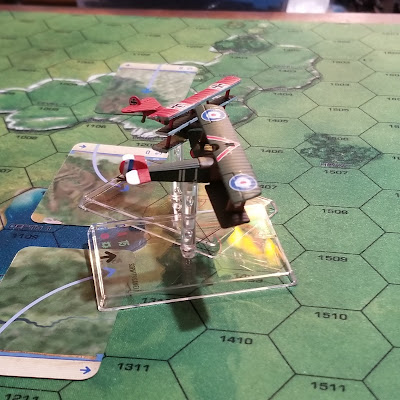 When I first started playing Wings of Glory (as Wings of War) I was in college. Me and my college buddies would stage small biplane duels across the kitchen table, one after another for hours. Best out of three? Weak. Best out of ten? Now we're talking.
It was easier in those days. We'd sit at the table, fueled by doritos and soda, and go for six or so hours easy, just one game after another until we started hankering to dive into some D&D or a dense boardgame like the aforementioned Arkham Horror. I wasn't good at Wings of Glory, but I was good enough to give everyone else a run for their money.
Fast forward to the days when I started dating the woman that would become my wife. She's a huge fan of biplanes, so it just made sense to pick up a starter set and show it to her. Playing it could be a great bonding activity, I figured, but we ended up doing other things (like going to concerts and writing poetry to each other) instead. We didn't crack it open back then, in 2016, but we did finally break the tape on it last night, and got these planes on the table.
If you're not familiar with Wings of Glory, it is, at its core, an airplane dogfighting simulator. The miniatures are beautiful, they come pre-painted and assembled, with manuevering decks and damage decks that reflect the power and agility of each individual plane. The easiest way to start playing is to pick up a Duel Pack, which includes two planes and everything you need to get them on the table. In fact, everything you see in the pictures is from a single duel pack, so there's quite a bit of stuff in them.
The duel packs allow you to start with WW1 biplanes, and offer simple, standard and advanced rule sets (three in total,) allowing you to start with the easiest, most basic rules and build on those to add additional variables and challenges to gameplay. There's also separate WWII rules, planes, starter sets, etc. and a side game called Tripods and Triplanes (based off War of the Worlds,) which I'm excited to try in the near future. This kind of modularity is the best way to design a game, in my opinion. Teach people the core mechanics, then add stuff slowly, session by session, building up to a point where the gameplay is absolutely crazy.
So how did my first game in fifteen years go? It was as quick to learn (about 10 minutes) and as quick to play (about 15 minutes) as I remembered it being. My wife chose the Red Baron, while I had the Sopwith Camel, and we chased each other around the table having a grand old time. Even though we both scored the same amount of hits in the end, I got lucky on damage card draws, so I managed to survive long enough (barely) to shoot her down. We'll definitely be playing more of this in the future. 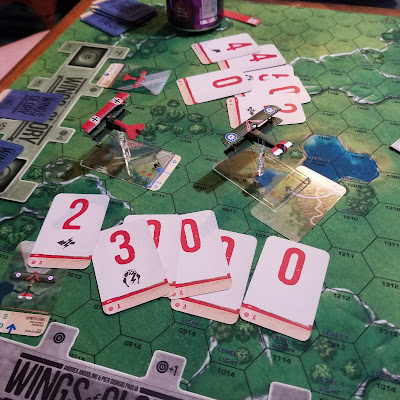