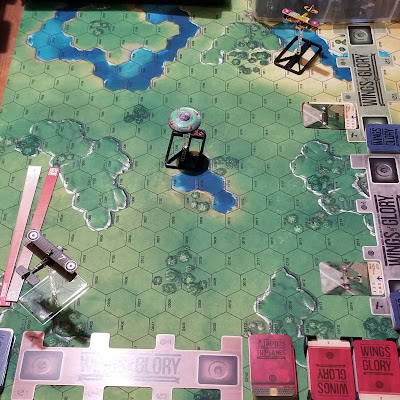 Classified Action Report
April 9, 1918
Second Lieutenant John "Duke" Singer
The brass back in Washington finally decided it was time to throw some extra funding at this saucer hunt that I've been assigned to. Wilson and Pershing both are hot to get their hands on one of these things, and they seem to think that recovering the technology will help turn the tide of the Great European War against the Central Powers enough to finally put an end to it. That's a cause I can get behind, sure, but honestly, I'm just happy to be the guy that gets to see these things up close, and maybe even splash one for Uncle Sam.
Some of that extra money means an extra plane for my unit. She's bigger than my SPAD S.XIII, a Sopwith 1½ Strutter piloted by a personal friend of mine, Second Lieutenant Clark "Rage" McKay. On the morning of April 9, 1918, approx. 07:30 hours, we got to take her out for her first flight as part of our new unit that the guys back in the officers' mess are starting to call "The Saucer Chasers." Some of those boys think we're crazy, but only because they haven't seen a saucer up close yet. 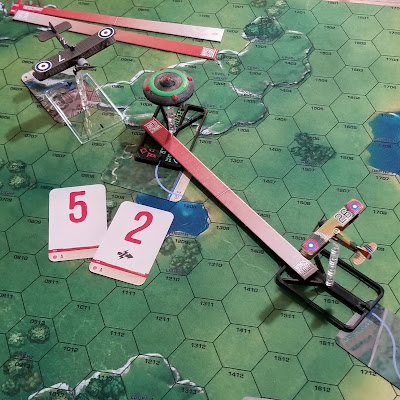 Radios on the ground gave us the spotting we needed to fly in with a pincher attack against the saucer, catching it just as it started to loop to the East. McKay's Strutter has that nice .303 Vickers on it, and the damage from that boy was noticeable as we swooped in for the initial volley. 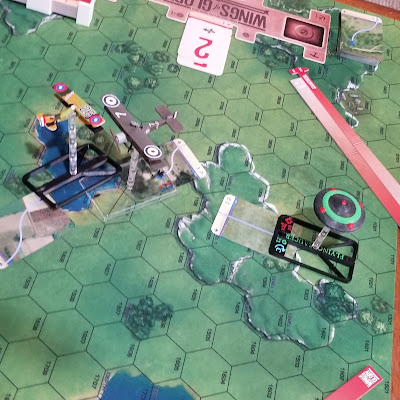 I feel obliged to admit though that in our enthusiasm and our haste to down the saucer, we made a terrible mistake that only the greenest of pilots tend to make. The instant the saucer was out of the way, we were both treated to a view of the other coming in head-on. It was only by quick thinking and quick action that we narrowly avoided a mid-air collision. 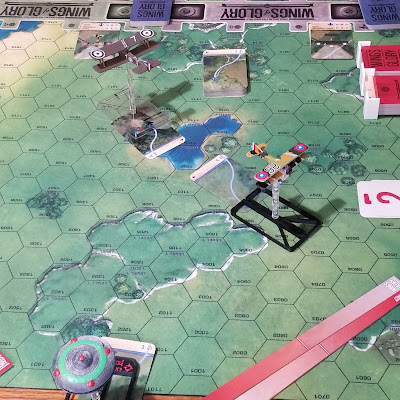 Still trailing sparks, the saucer turned North and got out of there real quick, quicker than we could follow. Both Clark and I turned and tried to pursue, but before we could line up another shot, the saucer was gone, and we were left with nothing for the fuel we burnt and the bullets we expended.
We stayed in the operational area until about 11:00 hours, then made our way back to the airbase.
Next time, we're going to down one of these slippery discs. Mark my words. Next time, we're going to crack one like an egg and see what's inside. I tell you what, we get one of these things under Allied control, and the huns won't even know what hit them. 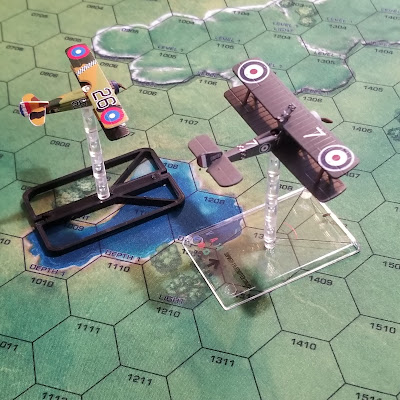 What is this?
Check out my original post for a breakdown of what's going on behind the scenes here. This time, however, instead of using a random draw from the saucer's maneuver deck to determine how it moves in a solo scenario, I tried using a free app that's made specifically for creating AI planes for Wings of Glory. 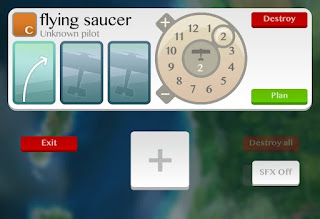 It's pretty nifty, but I think I'm using it wrong, because it literally just flew the saucer pretty much right off the board. Cinematic, certainly, but I was hoping for a dogfight, which is why I brought the Strutter. I'm going to spend a little more time reading up on the app, then next time, hopefully there will be a proper flight with the saucer chasing my planes as much as we're chasing him!
Labels: Wings of Glory