It is always the choir which brings me solace. When the chilly, blood-churned mud of the battlefield seeps into my boots, when the acrid stink of chemical fire rips through the air and bullets cry out for flesh, it is the choir which brings me solace. When the fears and doubts carried on the wings of chaos emerge from the depths of my mind, taunting and tempting me in equal measure, it is the choir which brings me solace. Whether the Cathedral of the Iron Saint rumbles across the battlefield on her heavy treads, her cannon lending her thundering voice to the hymns, or whether I sit in repose within the embrace of her stone walls and golden doors, it is the choir which brings me solace. The men and women who maintain the cathedral, the repentant sisters, the tech priests and crusaders, all chosen as much for their skills as for their voices, fill the halls of the mobile cathedral with their song. Whether our host is at rest or at war, they sing, and the sisters of my order sing with them, chanting the familiar songs as gentle cherubim dress them for war. Smiling, cheerful, these Sisters of Battle chant with the choir as they ready their guns, whether they be bolter, flamer or melta. In these moments, as in all others, it is the choir which brings me solace. It is the choir which shoves my spirit to soaring when I see all of my blood-gilded sisters bursting from the golden doors of the cathedral with a hymn on their lips and a fire in their eyes to match only that of the God Emperor Himself. I hear Him in all of their words. I feel Him in their passion. I see His will done as His daughters rush into the field of battle, bringing death to all who would stand against our divine Imperium.
It is the choir which brings me solace, even now, on this dark night, when the terrors of chaos claw at the edges of my consciousness with a ferocity I have not felt in a long while. Doubts, both fresh and old, rise up as quickly as I set them aside, haunt me even as I listen to my sisters singing the joys of their hearts to the sky. Their voices bring a warmth and peace to the cathedral that, on other nights, might easily chase away my many misgivings, but not on this night. The winds that whip past the walls chill my heart as much as they chill my skin, and I wonder, not for the first time, when I truly made the choice that led to this, wonder what more I might have done to keep everything from going so terribly wrong.
A handful of years ago, I was an up and coming inquisitor in the Ordo Hereticus, making allies almost as readily as I was making enemies. Whether or not one of those enemies was responsible for what happened to us, I may never know, but it was one of my allies that set us on the course that led to this place, to this path that I have had to learn to embrace. The Holy Orders of the Imperial Inquisition called for a crusade against the forces of Nurgle spreading through the Athena Sector and I, a young and brazen inquisitor, was chosen to lead that crusade. With the retiring of my old mentor Octavian, the famed Iron Saint of Trastevere Prime, I was considered the obvious choice. I would take up his mantle, take up the highest position aboard the cathedral ship Domitian Severus with several thousand devout souls under my command, and we would plant our boots firmly upon the faces of the followers of the plague god in the name of the Emperor and His holy Inquisition. 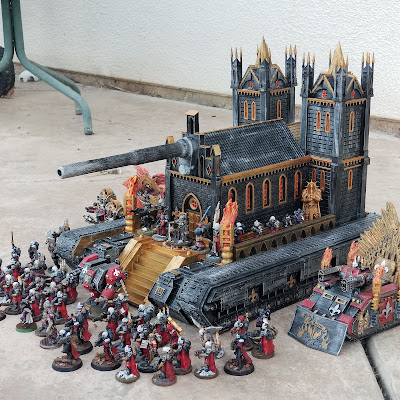 But as the cruel winds of the Warp would have it, we never arrived in the Athena Sector. I have told myself over and over again that this must only be the will of the Emperor made manifest, for He often works in ways that even the holiest of minds cannot comprehend, but I am not the only one among our number who has her doubts. Whether by His will or by the ill will of the forces of Chaos, we were wrapped up in Warp currents that carried us seventy thousand light years off course, depositing our ship somewhere between the Segmentum Obscurus and the Ghoul Stars, in a place where the Emperor’s light is too feeble to follow.
Realizing where we were took time and cost us a pair of navigators who were driven mad by the experience of peering so deeply and so desperately into the Warp. Worse yet, without the light of the Astronomican to guide us, our crusade was restricted to blind jumps, short and risky in nature, though the navigators who serve us have gotten better at making them with practice and with time. Self-doubt clawed at me as much in those early days as it does now, leaving me asking the same questions. Can I still lead our crusade home? Can we bring the Emperor’s light to a place like this forsaken stretch of space, to a place that has lain so long in darkness? 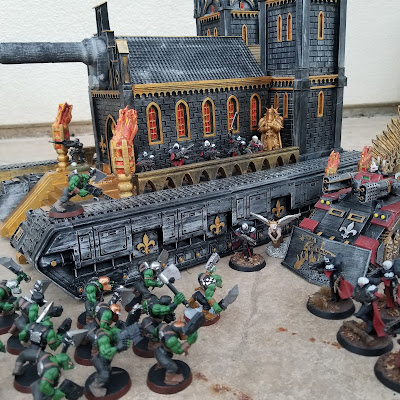 Then, as it is now, it was the choir which brought me solace.
On the seventh day of our journey home, I called for the attention of all of the souls aboard the Domitian Severus and made the proclamation that put the iron back into the hearts of all those who have come to pray and sing in the halls of the Cathedral of the Iron Saint. I reminded all of my sisters that, though we may be far from the God Emperor’s light, we are not alone. We have each other. We are not lost on the winds of chaos in a dark sector of forsaken space; we have purpose. We are a crusade still, serving as both the blade and the flame of the God Emperor in a place where they are needed most. We are a Shepherd’s Crusade, a people’s crusade, bringing hope and solace to the souls lost to the Imperium millennia ago. Our ranks will swell with the pious refugees we free from the shackles of Chaos, and with the righteous, eager to ally themselves to the Emperor’s cause. We will join in glorious battle alongside those destitute and desperate to serve the God Emperor with autogun and lasrifle. Our return home may be a journey of years, if not decades, but we will see Holy Terra again. We will return from our crusade stronger than we were at the outset, and we will cut a swath across the stars to rival even the greatest crusades that still burn in the memory of the Imperium.
Even the clapping that followed could not drown out my doubts or my fears when I spoke those words. Even I did not fully believe we could make such an impact on such a dangerous area of space.
Only the hymns that followed could solidify my will. Only the choir could bring me solace. 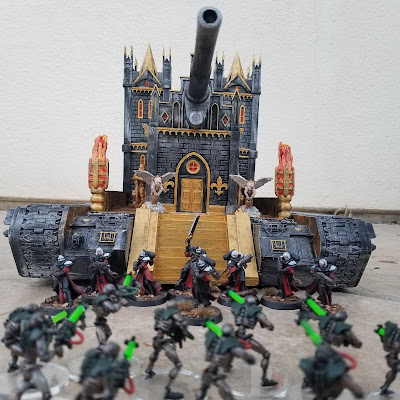 What is this thing?
The Cathedral of the Iron Saint took me about five weeks to design, print, build and paint. It was a labor of love, inspired by the compelling lore of Warhammer 40k. Below, I chronicle the design process in photos taken during the creation and painting. How I will use this terrain piece in future games still remains to be seen, but for now, it has a place of some prominence on the surface I have set aside for my Sisters of Battle and their Shepherd's Crusade, acting as much as a shelf as it does as a focal point to draw in the eye and make newcomers to 40k wonder just what game could have such a bizarre and interesting playing piece as this in it. 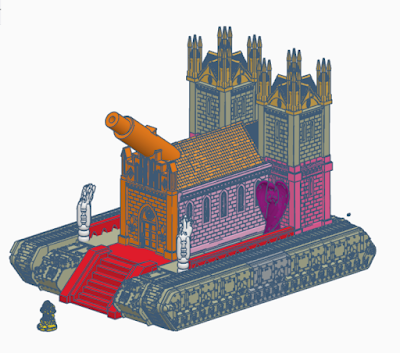 Early design draft in CAD. Battle sister to the left in front for scale. 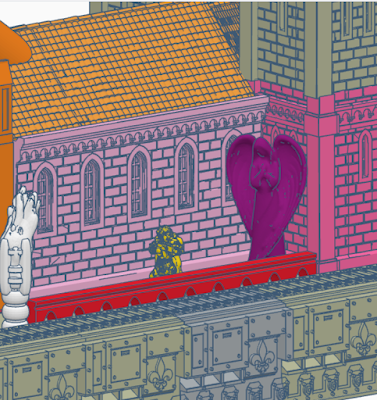 Another shot of Battle Sister for scale with early design draft. 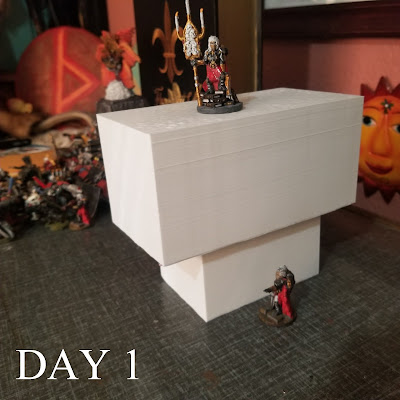 Printing begins. These are the structural elements at the core of the cathedral. 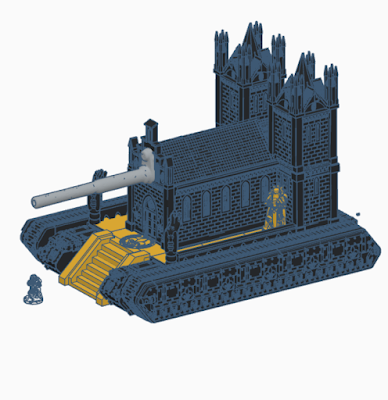 Redesign of the cathedral in CAD on Day 2. 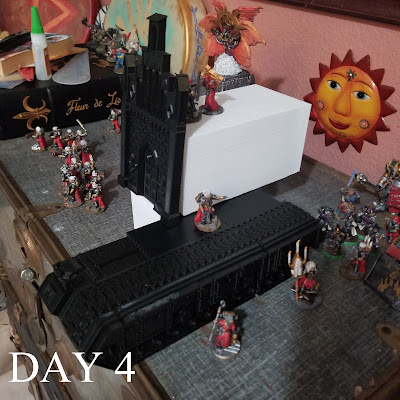 I would print in shifts, trying to optimize my printing time. Each corner was 36 hours on my Ender 3. 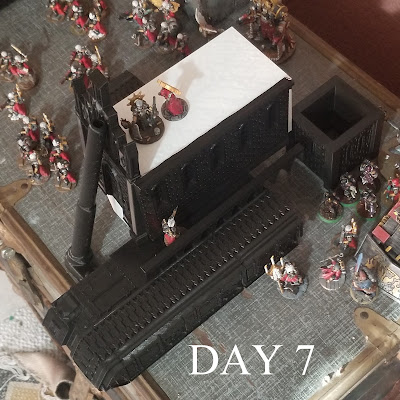 Some parts, like the wall and cannon, were only overnight prints. 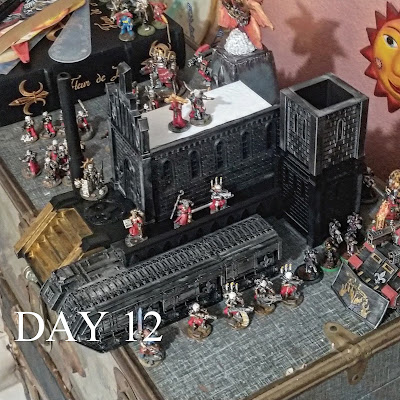 Early dry-fitting and the start of the painting. I was eager to move on, but not eager to wait through more 36 hour prints. 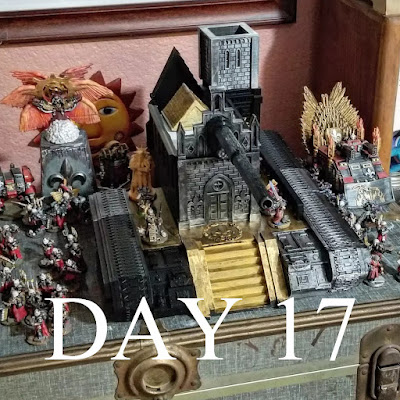 A printing error that killed one of the 36 hour prints halfway through stalled out the process, but routine printer maintenance got me moving again. 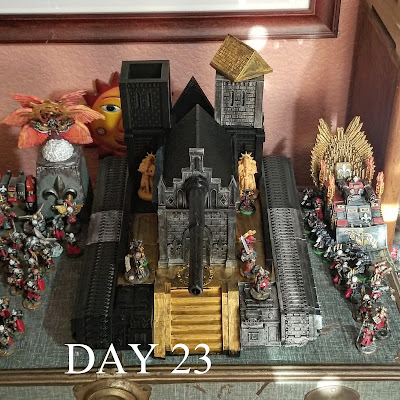 With the last corner of the base printed, it was time to glue together the base and start painting. 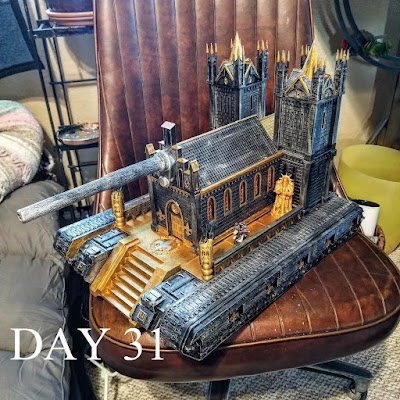 Several weekends of painting yielded this beauty. This was only partially glued. 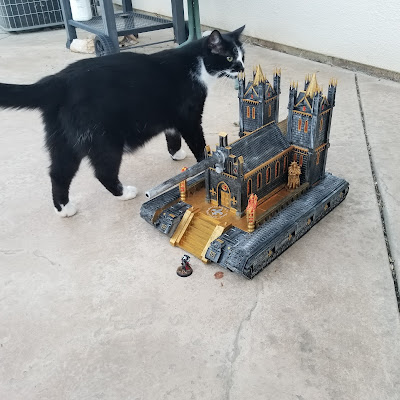 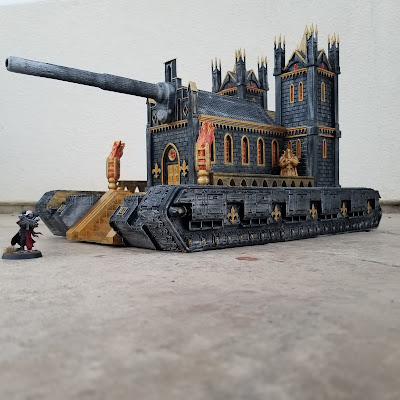