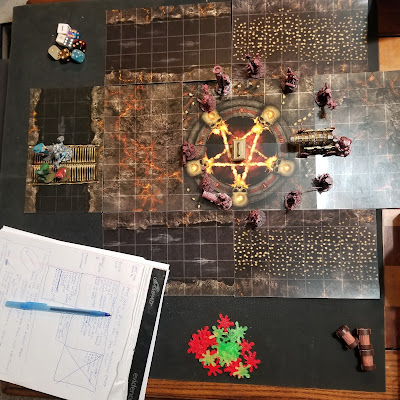 With the twisted undead of the Jagged Tomb of Hidden Death put to rest, our heroes venture forth to fight Hateful Demons in the Crimson Vaults of Spores and Misery. For this battle, I dug out my Surt-Sworn Dwarves from Punkin' Figs, plus a cannon (Active Terrain) from Ill Gotten Games. The dungeon is made of map tiles from the Game Mastery "Hell" set. 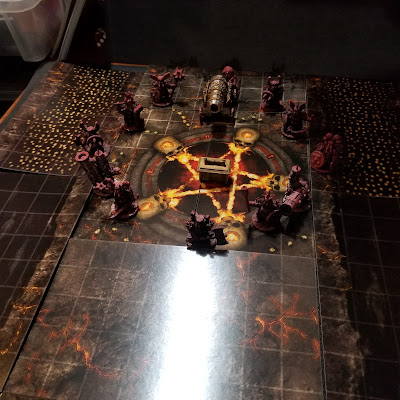 Our party comes through a strange, abyssal portal into a dark netherworld of fire and bones. Strange, dark demonic dwarves sworn to serve the god of soot and flame gather around a single ornate treasure chest with a dangerous looking cannon watching over them. 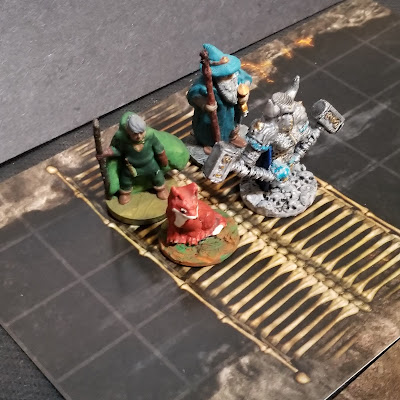 The heroes ready themselves for a fight, crossing over a bridge made of bones. 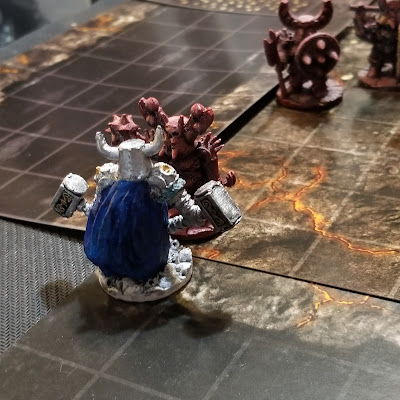 The first of the evil dwarves closes range with Sigyn as the heroes spread out, careful to stay out of range of the cannon. 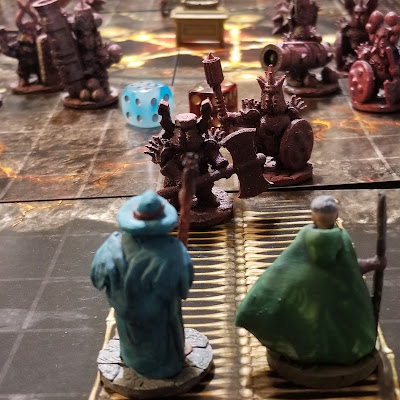 The bridge sways as the abyssal horrors close on Merlandir and Daedalus. 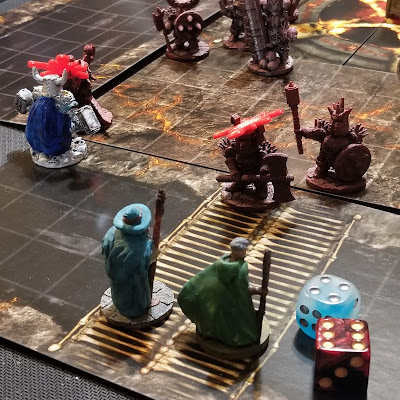 First blood is drawn! A hit for Sigyn and a hit for Merlandir! 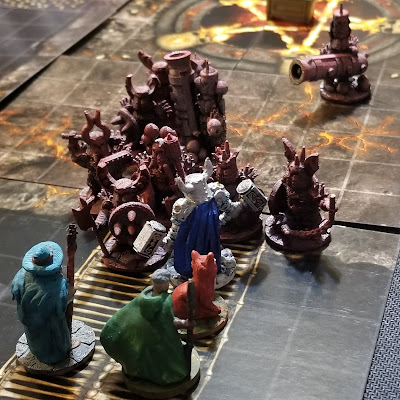 The demons dogpile the heroes as Sigyn drops back to protect the wizard and the cleric. 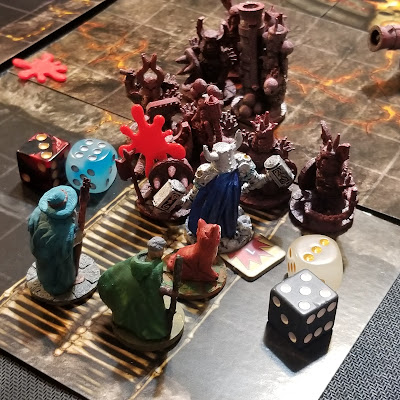 Sigyn misses her shot and takes a blade to the side as Merlandir drops another horror. 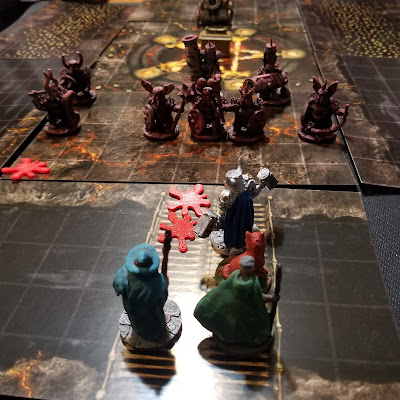 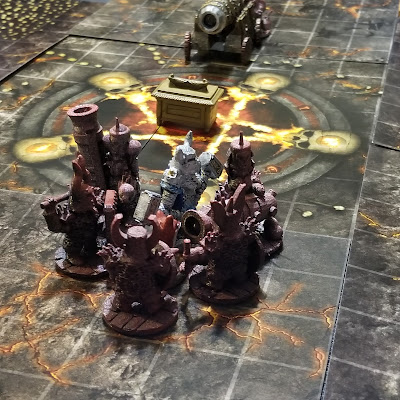 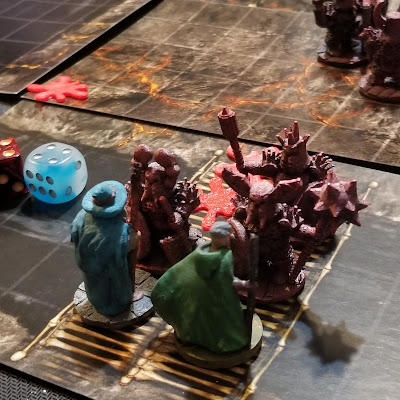 More horrors close on the casters. 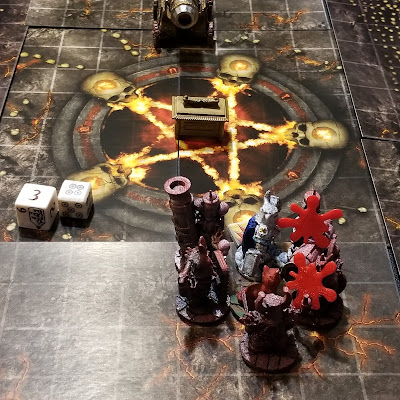 Sigyn crushes two more skulls as the cannon takes a shot-- and misses! 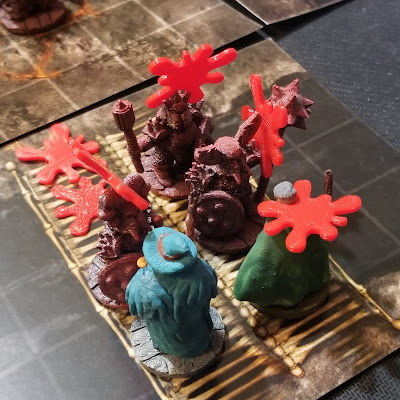 The dwarves on the bridge lash out and Daedalus falls. Desperate, Merlandir pulls out his Fiery Bolt Wand and completely immolates all of the surrounding enemies. Miraculously, he shrugs off the flames as and flicks the sparks from his robes, unphased. 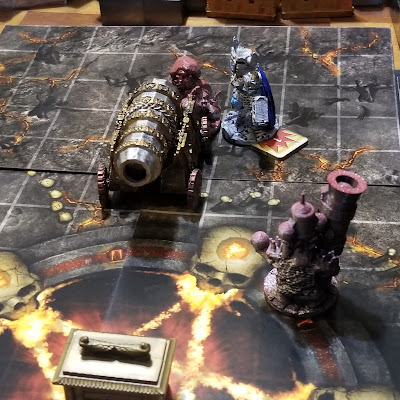 Sigyn uses Blitz to get right up on the dwarf manning the cannon! 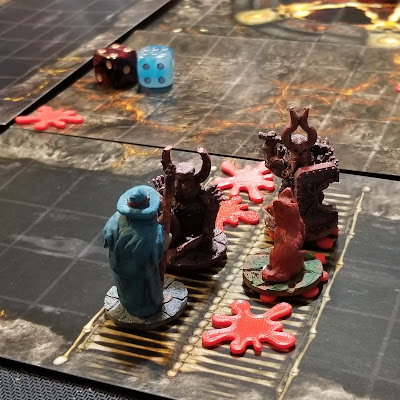 With Daedalus down, Merlandir and Fuzzybutt stand alone against the horrors on the bridge! 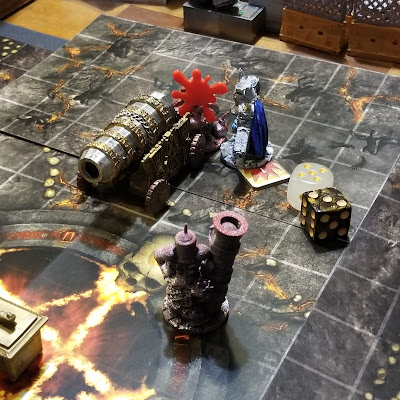 Sigyn strikes, dropping the dwarf manning the cannon. Another dwarf toting a portable cannon takes a shot at Sigyn and misses. 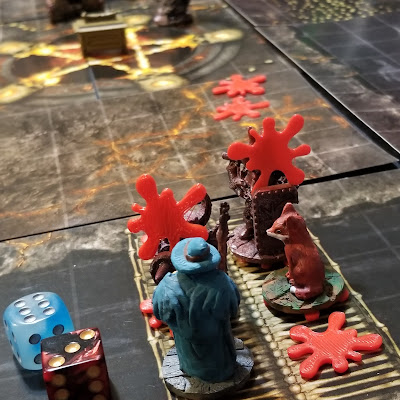 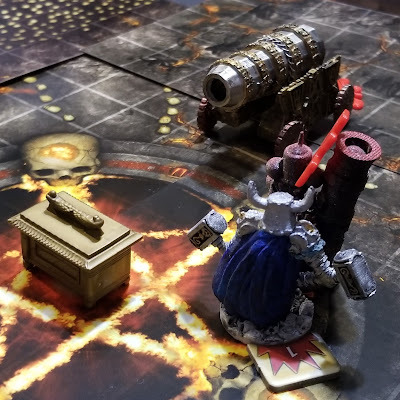 Sigyn beats down the last of the demonic dwarves and gets access to the chest! 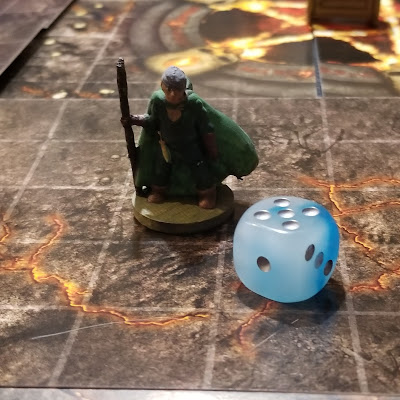 Daedalus lives to fight another day! 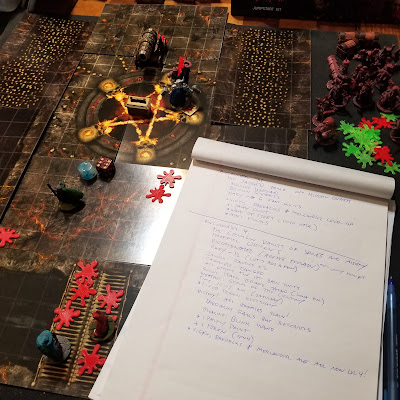 This battle was on Easy difficulty with some extra points to make it closer to Normal difficulty.

As the party recovers in town, they sort through the treasure they recovered from the tomb. Sigyn, Merlandir and Daedalus all reach level four, and the loot they've gathered consists of a Blink Wand.
Total play time: about 35 minutes.
BELLONA can be found here.
Labels: Ellie Valkyrie