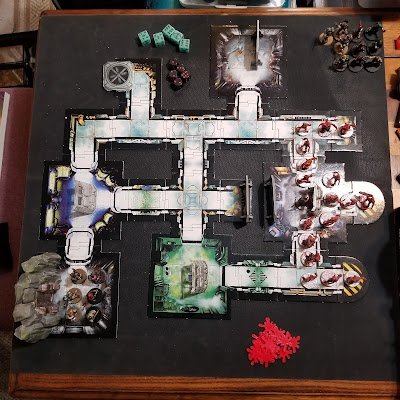 Any excuse at all that I can find to break out the 2nd Edition Space Hulk tiles, you know I'm going to take it. I love these things. I wish I could get a second set for less than $150 because I would totally use them in tandem with my existing set.
Today, I'm doing a simple skirmish game using the BELLONA system. The concept of this skirmish is simple; two different warbands with very different strengths and weaknesses face off in the claustrophobic crawlways of an infested space station. 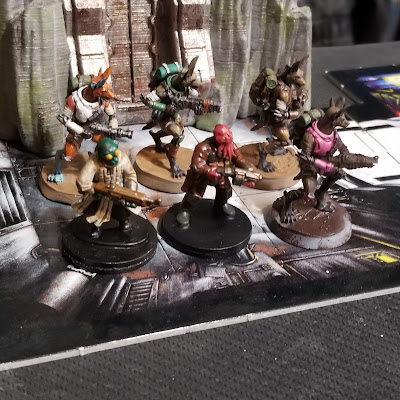 One warband (the one I'm secretly rooting for) is a group of six sci-fi soldiers worth 18 points. Each one is a basic unit with Ranged and Acrobatic, but no other modifiers, so three points each. I see them as a small crew of mercenaries sent in to find out why the colony has gone silent. The miniatures representing the mercenaries are a mixture of Stargrave plastic miniatures and Jackals from One Page Rules. The big bunker door behind them is from Ill Gotten Games. 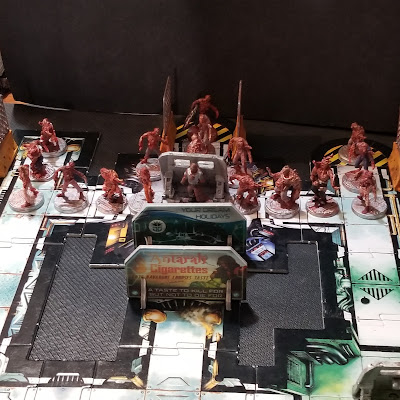 The other side is composed of a swarm of meaty horrors that are all basic 1 point units. There are eighteen in total, so three for every mercenary. The tactics for the horrors will mostly revolve around sacrificing units to swarm and surround the enemy, while the tactics for the mercenaries will involve keeping the enemy out of striking range and closing off hallways to minimize the number of attacks each mercenary has to survive in a given turn.
The horrors are mostly from Sedition Wars, but there are a few 3D printed zombies and kitbashes in there for flavor as well. 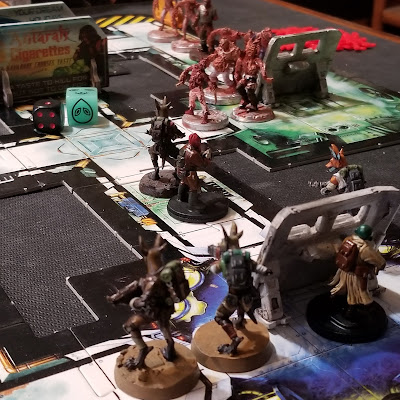 As the battle starts, the mercenaries win the roll-off and get to go first. They start spreading out to try to secure the cooridors and create effective killzones. The horrors, on the other hand, are rushing in, surging down every path available to them in an attempt to overwhelm the mercenaries. 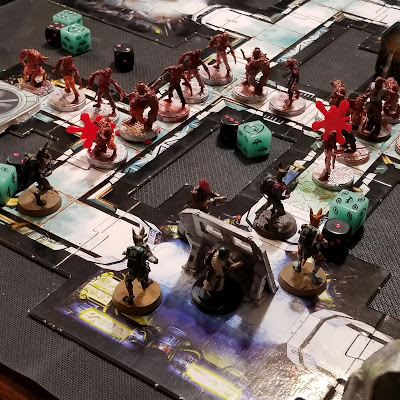 Turn 2 is when the fun starts. The first of the horrors get within range of the mercenaries' guns and the first few shots are fired. Volley after volley finds its mark and a pair of horrors hit the ground. 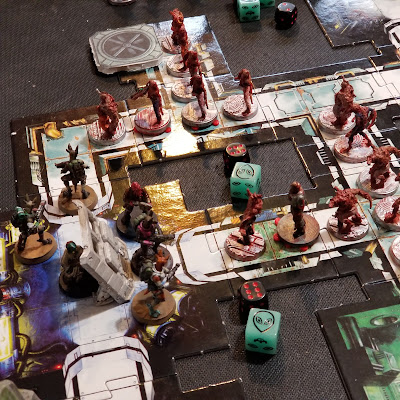 As the horrors advance, the mercenaries pull back, executing a tactical withdrawal to the safety of the nearest room. Bunching up, they close off the only way through and settle in, guns ready.

Gunfire rattles off, and as the horrors close ranks with the mercenaries, the beleaguered crew suffers their first casualty. 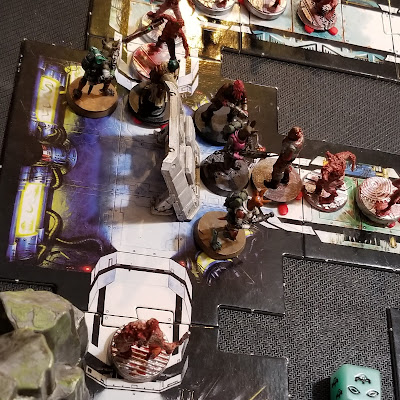 Exploiting the opening created as the first mercenary falls, the first of the horrors rushes past the mercenary line and blocks off the only escape route. The mercenaries close ranks as waves of meaty aliens crash against them. 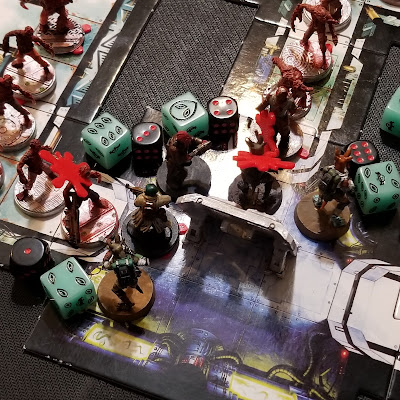 More gunfire, more carnage. Another mercenary falls, and suddenly it's a lot harder to hold the line. 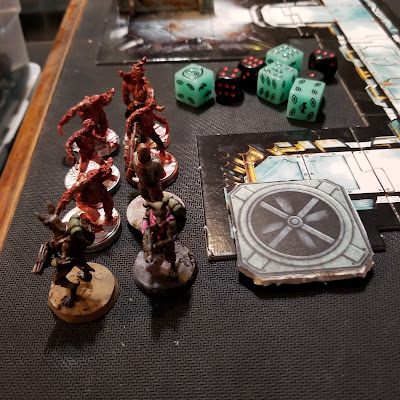 Both sides are still evenly matched, having lost the same amount of points worth of units, so the winner is anyone's guess at this point. 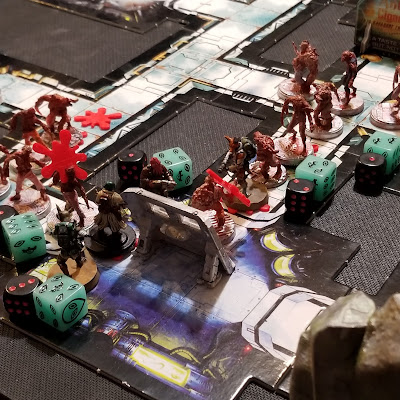 Thrilling heroics ensue. Desperate to stem the tide of horrors, one of the mercenaries uses his body to block off the northern corridor and takes out the horror who snuck past the line. 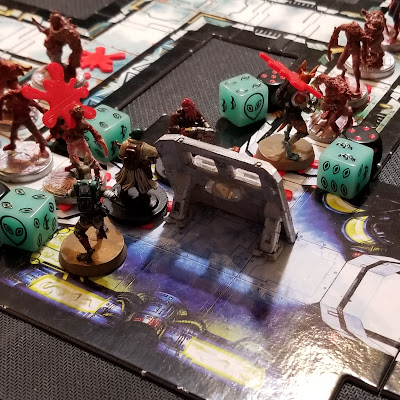 Unfortunately, in the next wave, the hero falls.
The bug-eyed alien mercenary makes yet another kill. He's on a roll! 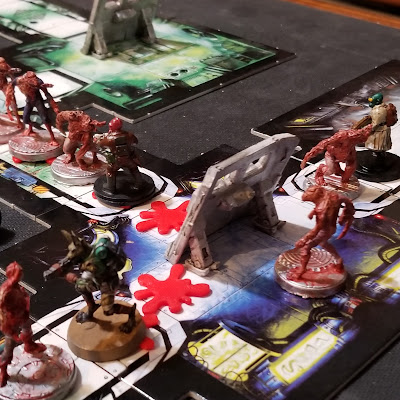 Desperate times require desperate measures. Pushing back, two of the mercenaries throw themselves into the fray, blocking off the corridors again. Bug-eye withdraws to cover their exit as two more horrors close in on him. 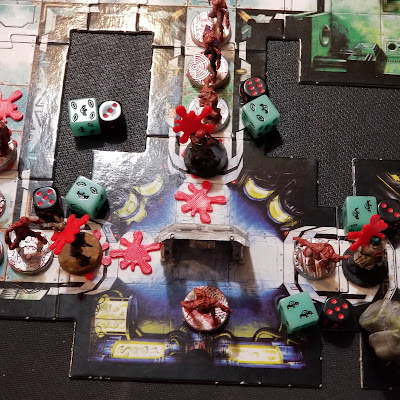 And then, in a horrifying stroke of bad luck, everything suddenly ends. The horrors get high rolls and drop the remaining three mercenaries in a single sweep.
Fortunately, the mercenaries took most of the horrors with them before they were overwhelmed. 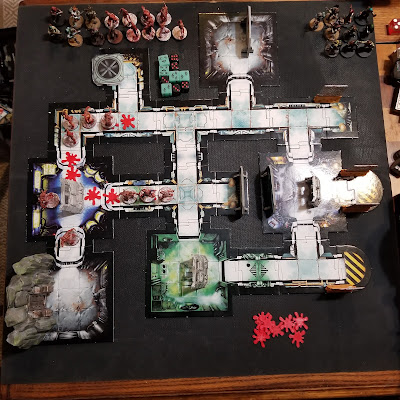 The station goes quiet once again, and the remaining horrors are left to roam the halls, hungering for more mercenaries to devour.
Total play time: ~50 minutes.
BELLONA can be found here.