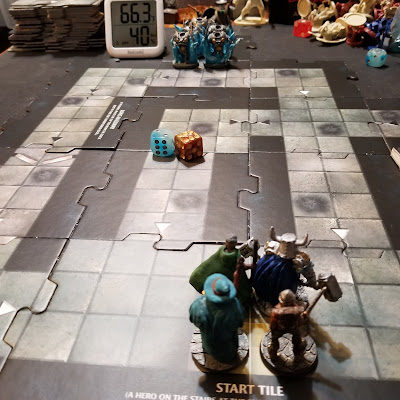 The other day, I got a hankering for some good old fashioned dungeon crawling with a party of miniatures and clearly defined map tiles. Most of the systems I have on the shelf were way more complex than anything I wanted to tackle with my busy holiday schedule, so I figured, why not just make a rule set that can be tacked onto the BELLONA system which will allow me to run a solo campaign of quick, simple battles full of thrilling heroics and glittering treasures?
Thus, the DUNGEON CRAWLING WITH BELLONA supplement to BELLONA was born. It's up on Itch.io as part of the deluxe edition here. There's also a free-to-try version of the system on that page if this is the first time you're hearing about it.
After extensive playtesting, revisions and notes crumpled and thrown in the trash, I was ready to run my first campaign as a player instead of as a playtester. What follows is the first of the adventures of the "Blue Banner Adventuring Party." I'm playing my campaign on Easy difficulty, but I'll probably bump that up after my characters get some levels under thier belts.
In the picture above, you'll see our party of intrepid heroes preparing for their first dungeon delve. I went for a varied party for this campaign, the stereotypical mix of warrior, wizard, cleric and rogue. For our Human Warrior, I have my old standby, Sigyn Hammeress, from Punkin' Figs. Our Human wizard is called Merlandir (also from Punkin' Figs), while our Gnomish Rogue Gnorbert's model is from Brite Minis. Our Elven Cleric, Daedalus, is a miniature from Ill Gotten Games.
Shortly after our party of level 0 heroes is formed, they make a journey to The Jagged Vaults of Hidden Death to face a swarm of Magical Undead. I can't remember who sculpted these animated armor suits (they're amazing) but I got them from the Ill Gotten Games Patreon when they were doing a collaboration with another sculptor a couple of years back. If anyone reading this knows where they're from, definitely let me know so I can give credit where credit is due.
The tiles for the dungeon itself are, of course, from Wrath of Ashardalon. 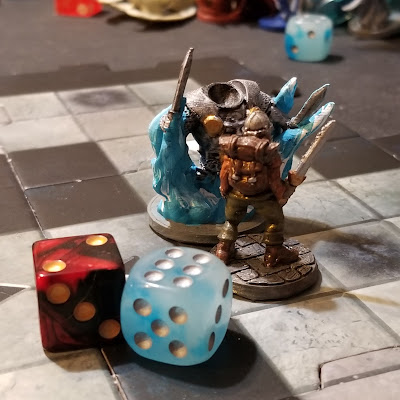 Combat begins almost immediately. Using his modifiers and class skill, Gnorbert delivers the first strike of the turn and deals a point of damage before slipping away again. 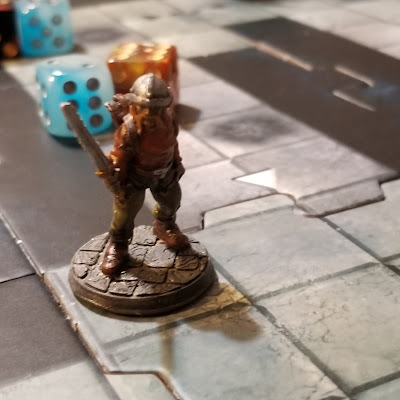 Satisfied with himself, Gnorbert slips into the shadows. 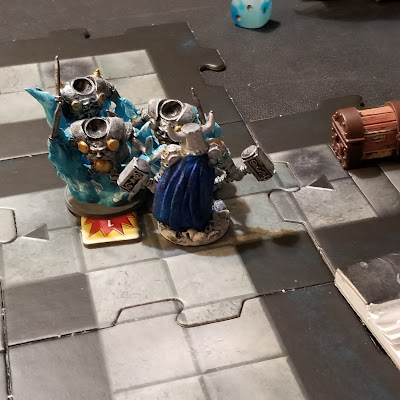 The terrifying suits of twisted armor animated by some strange, magical fire descend through the hallways of the vaults, but Sigyn meets them head-on. Using Blitz, Zeal and Sweep to her advantage, she flails wildly, but manages to land one single hit on the enemy. 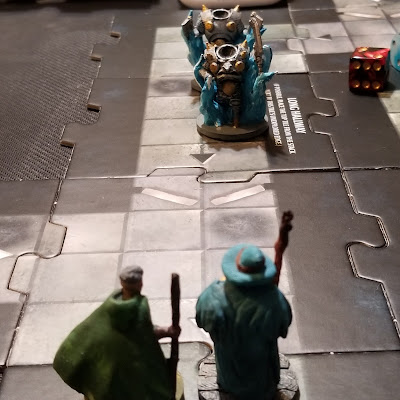 Meanwhile, nearby, Daedalus and Merlandir prepare to face more of the vault's magical guardians head-on. 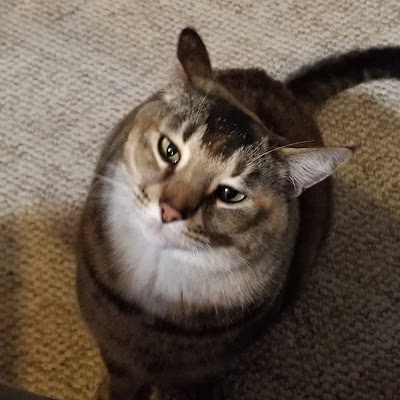 Punkin, meanwhile, had decided I had better things to do than dungeon crawling. She needed to be petted! 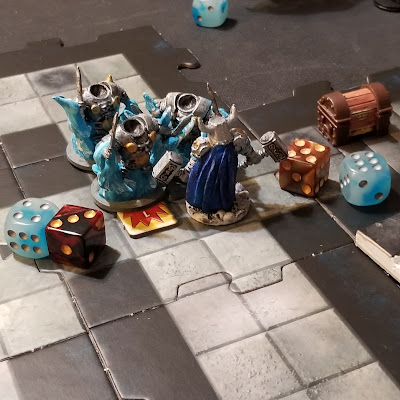 After pets, I returned to the combat and it was time for more smashy-smashy between Sigyn and the armored swarm. 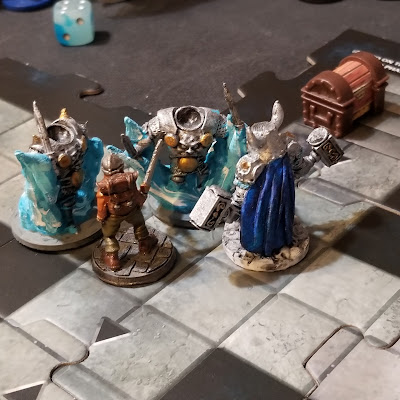 Once the first of the armored guardians fell, Gnorbert rushed in to help Sigyn stand against them. 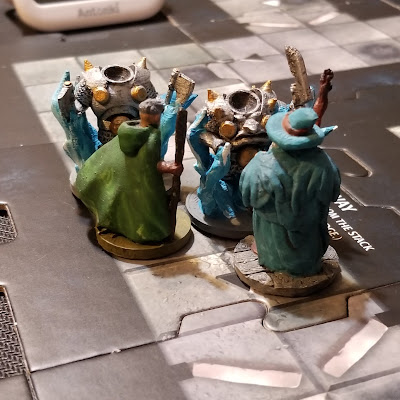 Daedalus and Merlandir closed ranks with the guardians, the cleric inspiring the wizard as he struck out with his enchanted weapons (Advantage + Inspiration is nice.) 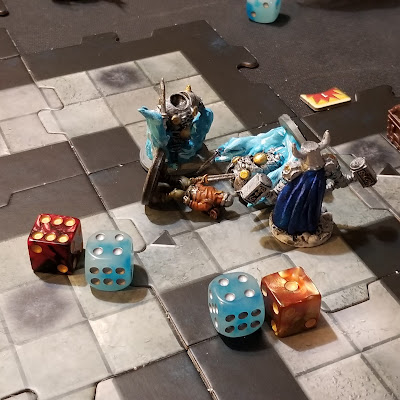 Never split the party! Gnorbert goes down hard as another guardian falls. 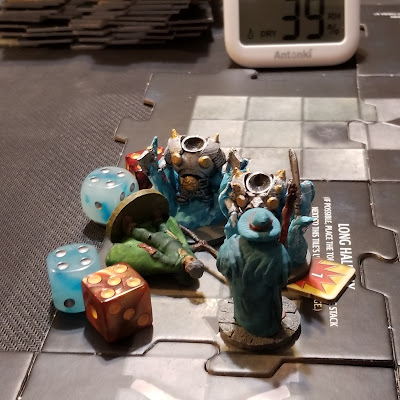 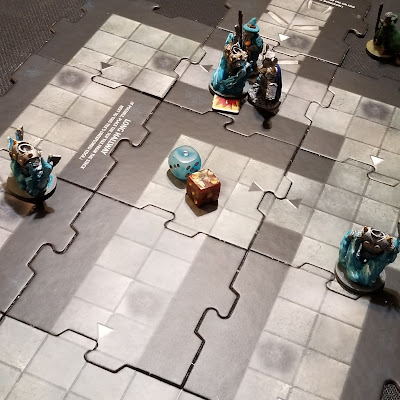 With half their number down, the remaining two adventurers group up to support each other. Merlandir casts Frost Wave to give them a little reprieve. 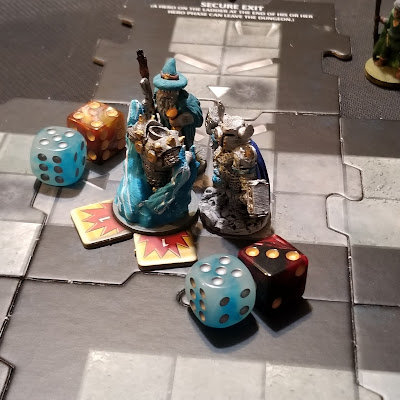 Working together, Sigyn and Merlandir successfully crush another vault guardian. 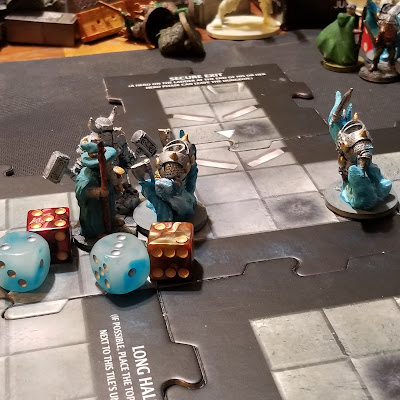 Two more of the guardians close with Sigyn and Merlandir, but only one gets close enough to hit. The hit goes wide, but the armored horror soaks one point of damage in the exchange. 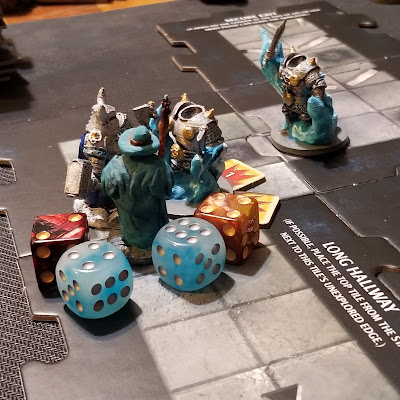 Tactical withdrawal takes our heroes back toward the exit. Briefly, they consider withdrawing, but decide to hold their own instead. 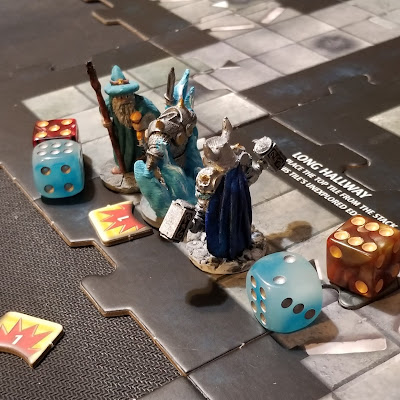 When only the final guardian is left in the Vaults, Merlandir and Sigyn close in on the horror and strike! 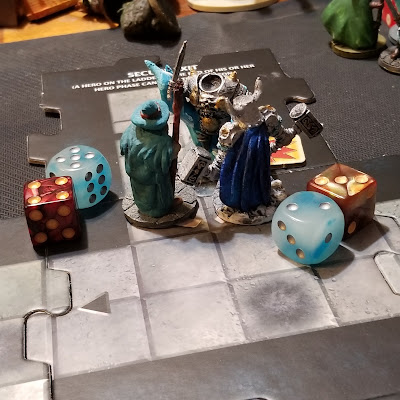 It withdraws, and they give chase. 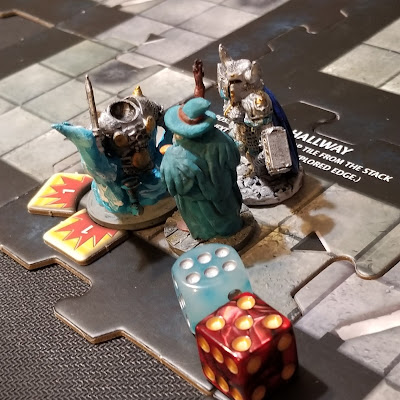 It chases, and they withdraw, but this time, Merlandir delivers the final, deadly hit. The vault is clear and the treasure is ours! Gnorbert and Daedalus are rescued from the vault, but only Daedalus recovers from his injuries. Gnorbert passes away in the night, leaving the others to mourn his passing and learn from the experience of losing one of their own. 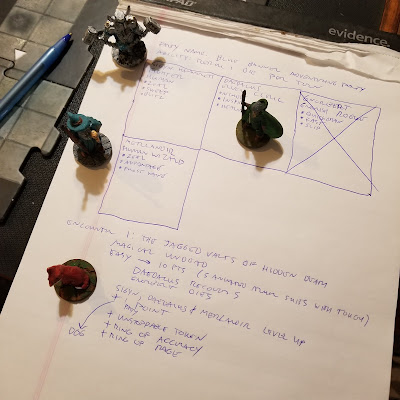 As the party recovers in town, they sort through the treasure they recovered from the vaults. Sigyn, Merlandir and Daedalus all reach level one, and the loot they've gathered consists of a Ring of Accuracy and a Ring of Rage. A tamed fox also joins the group, giving them their first hireling unit. Oh, and for clearing out all of the enemy units, they gain a blessing token. Sweet!
Total play time: about 30 minutes.
BELLONA can be found here.