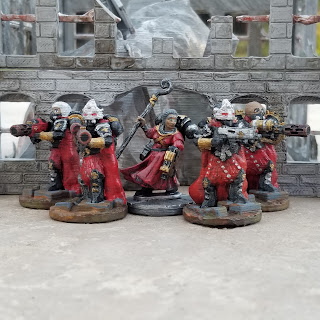 Forty-Thousand Bughunts From The Zone? Heresy!

I really love the lore of the Warhammer 40K universe. It's so darn interesting to me. I'll spend hours listening to the lore videos and audiobooks, absorbing the horrific grimdark sci-fi universe of the setting.

The game itself, however, just doesn't do it for me.

So, with a little bit of tinkering, I've cobbled together a hybrid system, or maybe more of a re-skinning for Five Klicks From The Zone, which I know pretty well at this point, with elements borrowed from Five Parsecs: Bug Hunt and, of course, Space Hulk. The result is an abomination, but I love it already, and I plan on posting the batt-reps for it on here alongside my other campaigns. This is the post where I'll place the rule changes for the hybrid, adding as needed and as the campaign progresses.

Miracle Dice: At the beginning of each turn, roll a new miracle die and add it to your pile. Discard a die from the pile at any point to replace any other rolled

Weapon Firing Modes: adapting the rules from 40k 2nd ed (my trusty Oldhammer 40k book), I am using the original templates, firing modes and shot numbers, then applying penetration and damage rules as needed to adapt to 5K.

Ammo Faults: if an ammo fault happens, it costs one non-combat action to clear it, which automatically succeeds. This counts as moving (for heavy weapons, etc.)

Custom Advancement: XP is gained as normal, +1 point per skirmish, +1 for MVP and +1 for elite kills. No loot is gained and recruitment is changed. Instead, six new miniatures are laid out and a die is rolled. The result determines which figure is added to the roster, able to be swapped in at any point. The squad can never have more or less than four sisters and one veteran sister, so if a mission results in multiple casualties, roll until the squad is full again.