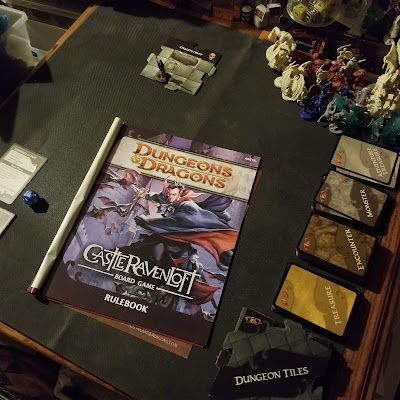 I'm late to the party with this game. Like really, really late to the party, but this last weekend was the first time I'd ever seen the game on a discount I could justify. Twenty bucks? Yeah, this game is totally worth twenty bucks. Fifty? Sixty? I dunno, man. That's like a week of work lunches, and I'm not really a fan of brown bagging it. I'd probably enjoy 20ish tacos more than one board game, right?
Once I got this thing open, though, I realized what an insane deal I'd gotten. Yeah, there's definitely fifty bucks worth of cardboard and miniatures in this one, so twenty bucks is an absolute steal. The map tiles are amazing. Everything about this board game just screams deluxe and, best of all, the stuff can be used for other games (like Five Leagues From The Borderlands) as well. Double trouble!
For my first foray into the game, I decided to take on the solo adventure, the escape from Strahd's tomb. With everything being so new and fresh, I didn't have anything painted yet, but I did have some decent, painted proxies, so I broke those out and got to playing. 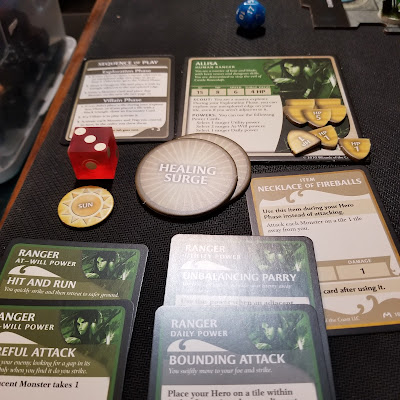 For my first run through, I decided to go with the most interesting looking character: The Ranger. For my treasure, I drew the Necklace of Fireballs. Nice!
Instead of using the sun tracker in the booklet, I used one of the big red casino dice I had laying around so I could count down to my doom in style. Also, my play area is limited, only about 60cm by 60cm, so the die method is more space efficient. 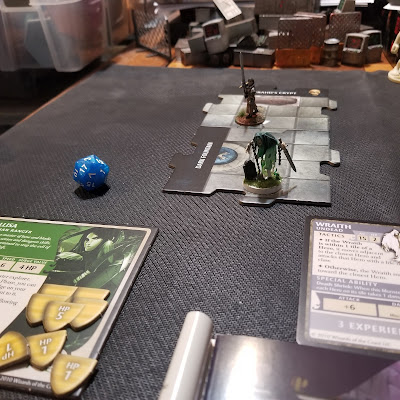 Right out of the gate, I drew a Wraith. Painted proxy in use? A Chainrasp Nighthaunt from GW. These guys are just so cool, even if they are some of the most fragile miniatures I own.
BTW: My character miniature is a kitbash of mostly Frostgrave elements.
That sword's taller than she is! 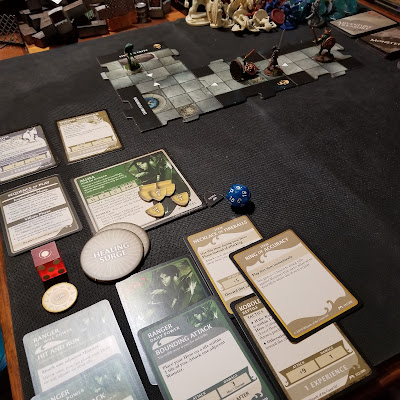 Moving away from Strahd's tomb as quickly as possible, Allisa cuts through a Kobold (proxied with a Drakkhen, 3d printed, from Thingiverse) and immediately encounters a second one. 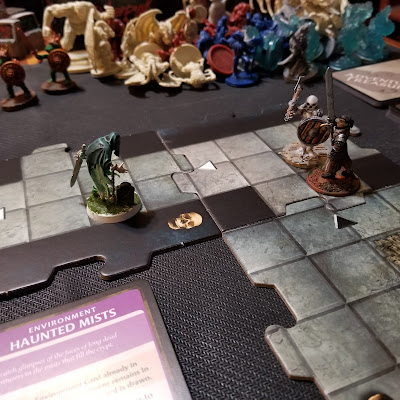 Cutting through the second kobold, she encounters a Punkin' Figs skeleton.
The Wraith is catching up fast! 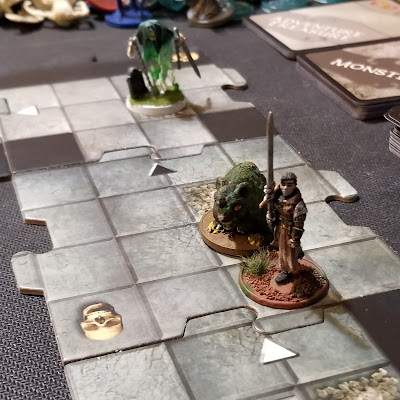 Another "Thingiverse special" proxies for a rat swarm and bites our Ranger as she makes her way through the tomb. 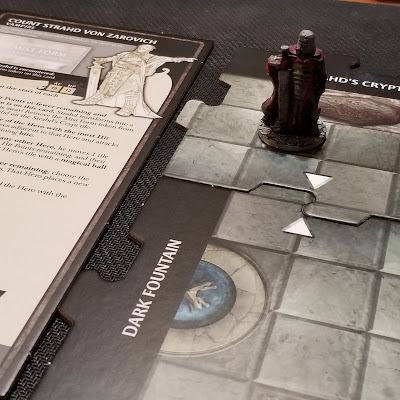 With the final white triangle tile drawn, Count Strahd Von Zarovich wakes up and starts to stalk Allisa.
(This proxy is a knight from Ill Gotten Games.) 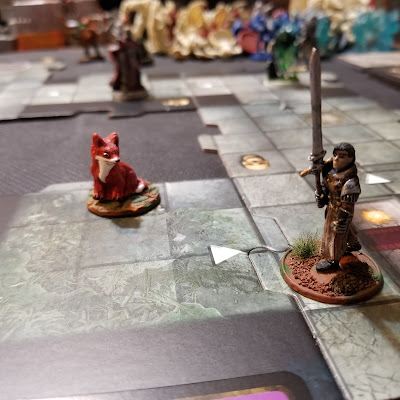 I didn't have any wolves handy, so a fox it is!
The vixen gickers, ready to pounce!
Also, this sudden corner is not looking promising. 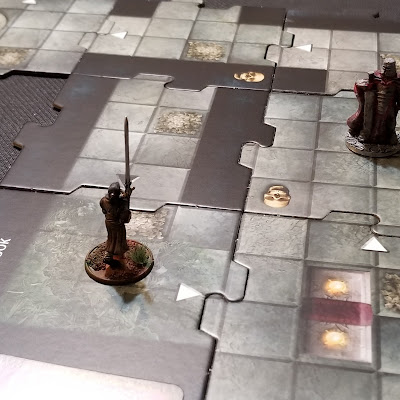 The wolf-fox thing is defeated, but beyond it is only a dead-end!
Oh no! Strahd is close! He's almost within striking distance! 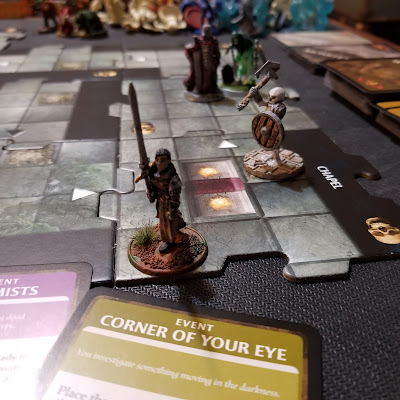 Saved by an event! But now there is another monster in play. A new skeleton! 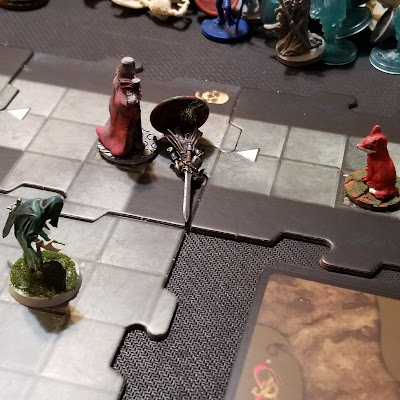 Unfortunately, there is no time to escape. Strahd bites Allisa and brings her to zero HP while a wolf and a wraith look on hungrily.
Only by the grace of a healing surge does Allisa get to her feet again! She's desperate to find her way out! 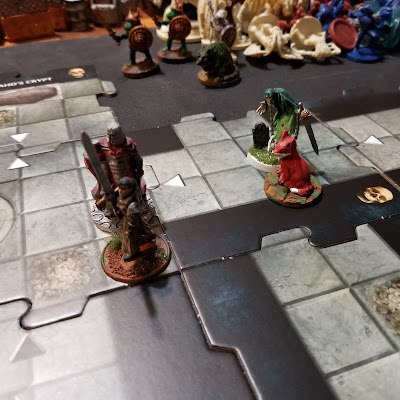 It's a mad dash past the count in search of the exit. Will she make it in time? 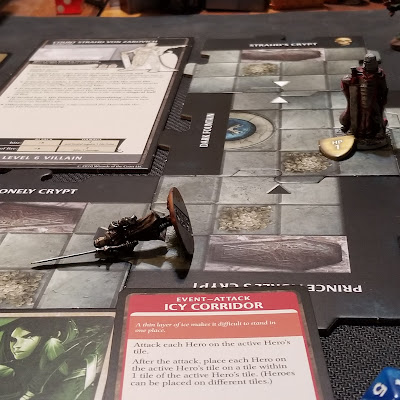 Boom! headfirst into a trap. Hope you like frozen dinners, Strahd! 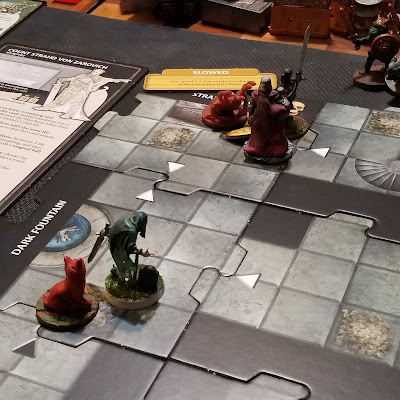 The last healing surge kicks in just as the hidden stairwell comes into view. Unfortunately, there's a giant spider on the stairwell! It leaps, covering Allisa in web! Looks like Strahd isn't the only bloodsucker in this castle! 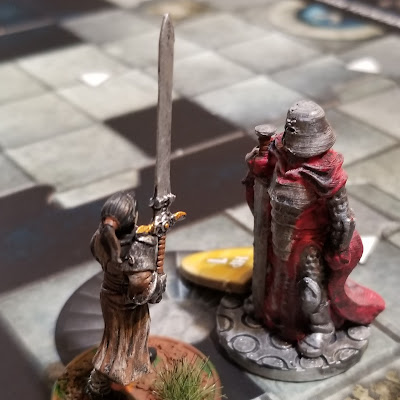 Slicing up the spider, it now comes down to a showdown on the staircase.
It's you and me, Strahd!
(Please don't kill me!) 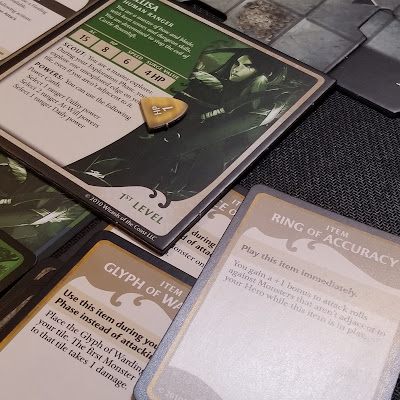 Whew! One turn on the staircase and we're good. Allisa escapes into the sunlight with only one hit point remaining. She got bit a few times, but I doubt it's serious. What's that burning smell?
All in all, a fun romp through Castle Strahdenstein. Castle Ravenstein? Castle Wolfenstrahd?
I love these tiles, though. I'm definitely going to get a lot of good use out of these tiles.
And these minis!
Castle Ravenloft on BGG
Labels: Castle Ravenloft