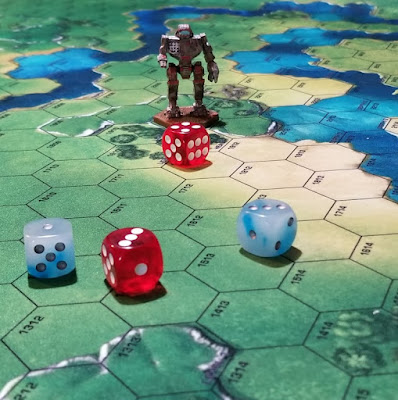 World: Kennard, at the border of the Federated Suns and the Outworlds Alliance.

Captain Dornentanz, I have some work for you and Lieutenant MacKay while your commander is recovering and the rest of your lance is undergoing a refit. It's not much, a simple job-- more of an errand, really, but I can't spare anyone to handle it right now, and I think it'll be an easy paycheck for you.

We're still dealing with some outspoken Lyran loyalists here on Kennard. They're rare this far Spinward, and usually easily dealt with by transferring the personnel back to Steiner space, but once in a great while, one gets out of hand and must be dealt with accordingly.

The short version is this: Captain Fredrich V. Eedlehoff has "liberated" a TBT-5N Trebuchet from the FedComm hangar near Gamma Garrison. We'll drop you nearby, and provide coordinates so you can cut him off before he links up with whoever has convinced him to break ranks. Your goal is simple, convince him to return and escort him back to base, or destroy him if he refuses to come back with you. For this mission, we're willing to cover damages and expenditures up to 200,000 C-Bills, plus 100,000 C-Bills if you bring him back, or half scrap value of the remains of the Trebuchet if you have to take him down. If you run into trouble, we're willing to allow half salvage rights to whatever else you kill out there when you catch up to Captain Eedlehoff. So far, we only know that he broke ranks when he did because of a message he received which says only "RETURN TO THE LIGHT." What this means, and who he might be meeting with, if anyone, is still, as yet, unknown. Be careful out there.

Chase down a Lyran in a Trench-Bucket? Sounds like a cakewalk. Yeah, the TBT-5N has a faster top speed than Poseidon or Maynard, but we've got a Davion dropship putting us in the field at an angle for a clean intercept. We've also got almost twice the firepower that he does. I remember hoping that all it would take to turn him around would be a warning shot, a show of force, but Lyrans will be Lyrans. Sure enough, as soon as we put the first laser in the air, he turned around and started firing back. Holy Terra, I forgot how many missiles those things could put in the air at once. 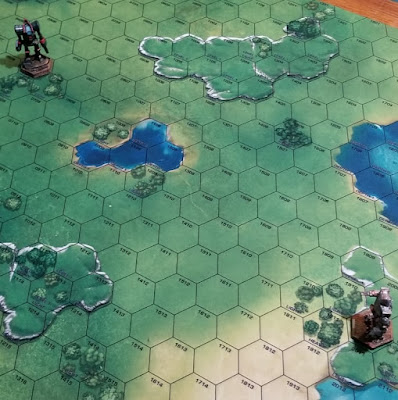 The first volley of long range missiles flew wide, obliterating trees near me. I fired back with my own missiles and ER large laser, but Captain Eedlehoff was too busy dancing on the ridge for any of my shots to find their mark. 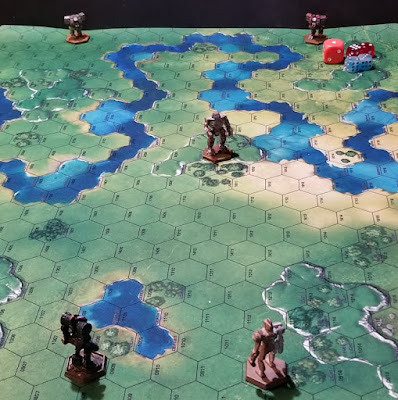 Maynard and I closed in, our sights lined up on the Trebuchet, but other signals suddenly lit up at the edges of our screens. A burst of static filled the radio, deafening us, and then two of those damn missile-carrying Cicadas suddenly moved into the operational zone and put their sights on us. 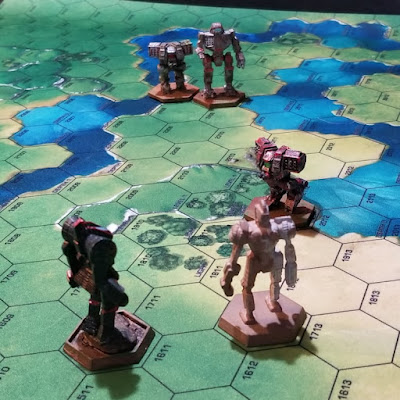 There must have been a signal, some agreed-upon plan set to unfold when the Cicadas arrived. One of them rushed right in to support the retreating Captain Eedlehoff while the other came right up to us and fired on me with the pair of medium lasers under its chin. MacKay and I fired back, but most of the shots went wide. There was too much between us and the Trebuchet-- I had to get closer to get a clear shot if we were going to bring him down. 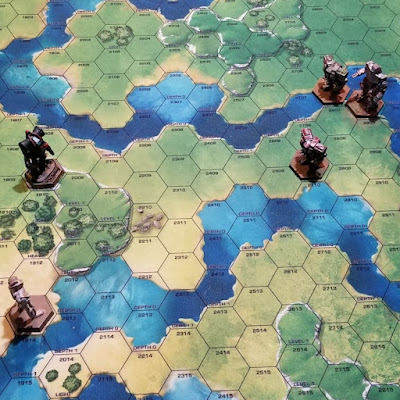 Making our way around the hill he'd been firing on us from, we hastily lined up our sights on the Trebuchet's center of mass and poured everything we had into his mech. Half the shots went wide, but the half that hit chewed almost every chunk of armor off the center torso of Eedlehoff's mech. 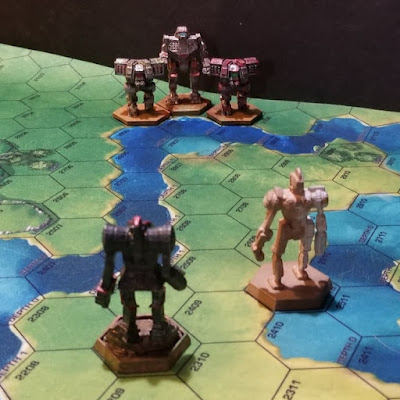 Escorted by the Cicadas, Eedlehoff continued to retreat, firing as he backed through a river toward the edge of the operational zone. Maynard's missiles and Autocannon volleys went wide, but my own lasers lashed through the Trebuchet, nearly cutting apart the mech's engine and gyro assembly. Shaky and barely able to function, Eedlehoff's mech released a final blast of missiles and retreated beyond the edge of the operational zone. MacKay and I grouped up, ready to pursue, but then we picked up a whole cluster of incoming signals. Eedlehoff's cavalry was coming, and there were way too many heavy and assault mechs on my radar for me to believe that this was just the actions of some isolated rebels or pirates. There's a lot more going on with this little agricultral world at the edge of Davion space than we were ever told about. Is Steiner trying to take Kennard? Is the Outworlds Alliance staging a full-on invasion? Is it something else entirely? 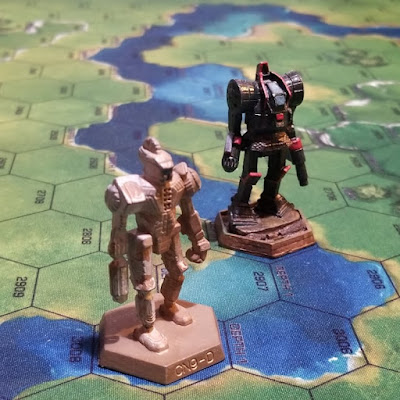 Commander Ferox's voice cut across the channel before I could think much more about it, ordering us to retreat. I wanted to argue with her, but the sheer number of enemy units converging on our position convinced me in an instant that she was right. It pissed me off, having to scrub a mission like this, but I turned Poseidon around and broke into a run for the incoming Davion dropship instead of staying to try to duke it out with whatever was coming. As we made our escape, I tried to call up Representative Nazir, but she'd gone quiet, and with no explanation. Everything about this mission, and little things about the past missions, has me on edge. Something is going on here, and if Nazir knows what it is, she isn't giving us the whole story.

The doctor at the Lindon's Battalion facility told me to stay in bed, so I snuck out and got into ops before he could stop me. I knew something was off the instant I saw the briefing on the mission. Eedlehoff might have been Lyran in training, but he has a deeper secret tied to whatever is going on here that involves, or maybe is just being blamed on, the local pirates. After my people were extracted, I tried to reach out to Representative Nazir, but she's gone completely silent. No debriefing, no messages, nothing but a check to cover the armor damage Maynard and Poseidon soaked with zero compensation beyond that. I get it, mission failure means no pay and all that, but the cold shoulder she's giving us is so unprofessional that it worries me. I think Captain Dornentanz is right. Something is going on here and Nazir knows a whole lot more than she's telling us.

I have a meeting with Colonel Sarah Lindon of Lindon's Battalion tomorrow. All I know is that it's urgent, it's sudden, and it's about a job. With the pilot I've hired for Old Bullet (our Rifleman) coming in at the end of the week and the last of our repairs set to complete in a couple of days, we'll be ready to field our lance early next week. Whatever Colonel Lindon has for us, I've just got to believe that we're up to the task and ready to face it.

The premise for this mission was pretty simple, and I think I should have given the Trebuchet more ground to cover in order to make things more even for the Ferox Rangers. Also, we had a lot of bad die rolls (and a couple of good ones) making it where almost all the hits happened in the last couple of turns. I had a large die off to the side, and figured that I'd play it where the Trebuchet would stand and fire volley after volley of LRMs until the Pirate Cicadas appeared. Once they appeared, it would be their job to escort the Trebuchet while it retreated. In order to randomize when the Pirate Cicadas would appear, I rolled a big die, with the idea that if I rolled equal to, or less than, the current turn number, the Pirate Cicadas would appear. Sure enough, at the start of turn 2, I rolled a 1, so they showed up immediately. If they had been delayed another turn or two, we might have turned the Trebuchet into scrap, but ah well. Win some, lose some-- either way, the story keeps moving and the results of the mission influence the narrative moving forward.

Also: standing in for the Pirate Cicadas are one of my own creations, a CN-20 Chinchilla.